“Adding fuel to the fire.” We’ve all heard the phrase and used it at one time or another. Morgan Stanley, one of Wall Street’s most influential voices in energy trading, probably lent a stronger voice to that phrase than it intended this week.

On the heels of a four-day oil rally that had already added 65% to U.S. crude prices, Morgan Stanley issued a note on Tuesday with the following words:

“It does suggest the greatest mismatch in supply/demand is probably behind us.”

It was all that oil bulls looking for a V-shaped recovery required, since West Texas Intermediate’s epic fall to subzero prices two weeks ago.

By Tuesday’s settlement, New York-traded had added another 20%, reaching a near one-month high of $25.73 in post-settlement trade. 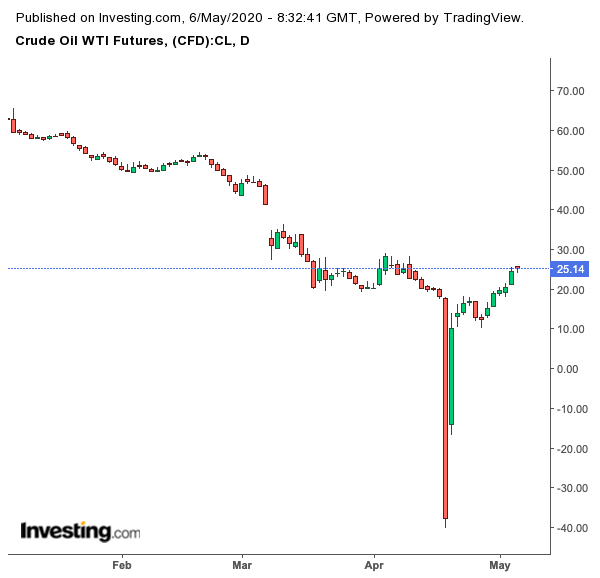 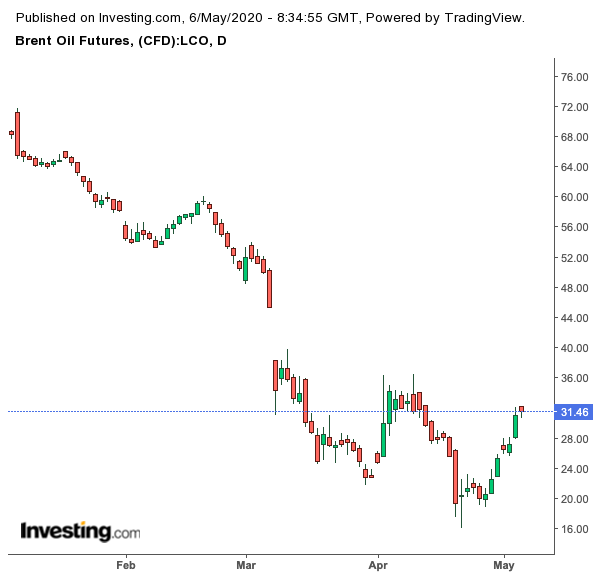 More importantly, the contango, or negative difference, in the front-month of both WTI and Brent was markedly lower than their immediate successive contracts, making the risk of holding prompt oil not as bad as a few weeks ago, when investors were practically fleeing the market or buying only in farther-dated contracts to store oil for later delivery. WTI’s front-month contango was just about $2 on Tuesday; it was 10 times as much two weeks ago.

What was so combustive about that Morgan Stanley note on oil? Well, as another saying goes, it was “all about timing.”

The Wall Street firm’s message on the positive shift in oil’s supply-demand dynamics landed a day after data suggesting that stockpiles of U.S. crude as in the past two weeks, and that storage space for the commodity may not run out as yet.

The theory about WTI’s improving fundamentals has evolved since new estimates issued on Monday on crude inventories at Cushing, Oklahoma. The hub serves as a delivery point for expiring front-month contracts of U.S. crude futures that have physical barrels committed on them.

Genscape, an energy intelligence service valued for its tracking of Cushing estimates, said on Monday that inventories at the hub grew by 1.8 million barrels for the week ended May 1. That’s a pretty significant estimate because Cushing stockpiles until then had been building by an average of 5 million barrels each week over four previous weeks.

Fear that Cushing will run out of space to store oil was what drove WTI’s expiring May contract two weeks ago to U.S. crude’s first-ever negative pricing in 37 years. According to the U.S. Energy Information Administration, Cushing has a capacity for 76 million barrels, and as of the week ended April 24, there were already 63.4 million barrels stored at the hub.

Given the demand destruction to oil from COVID-19 over the past two months, and the equally frightening picture developing globally for storage of Brent, traders had assumed the worst: that Cushing will fill up before the end of this month and U.S. crude pumped out of the ground after that won’t have a home.

Game-Changer For Oil? Or Just Snowball?

The memory of those who had to pay for people to take physical barrels of WTI from them during last month’s contract expiration is seared in the minds of many, who had been expecting a similar scenario of subzero prices to play out at this month’s rollover. The Genscape estimate on Cushing thus indicated a possible game-changer for WTI.

Aside from the estimates on Cushing, something else changed this week: most of the 50 states across America reopened for business to some degree, from COVID-19 lockdowns imposed since mid-March.

To be sure, Morgan Stanley wasn’t the only one to call out oil’s improving fundamentals.

Goldman Sachs, another Wall Street name known worldwide for its often-prescient read of the energy and commodity markets, said last Friday that oil was on the cusp of “a three-stage price rally” beginning with a relief rebound, followed by cyclical tightening, and finally structural repricing.

Add improving stockpiles to two bullish Wall Street forecasts and what do you get? A snowball, that’s what.

But That’s Not The Entire Story

However, like all good bullish market stories, this tale on oil has a flip side too. And it starts with the same Wall Street forecasts that got this week’s rally going.

What traders took from the Morgan Stanley note was apparently only half the story. While the firm indeed flagged a turnaround in its outlook on oil, it made clear that the path ahead .

Among its red flags for crude:

Goldman Sachs was just as cautionary in its Friday note, saying:

“Beyond this relief rally, we caution that the oil bull market that we forecast will take time and require patience.”

“Oil remains a physical asset and will, therefore, need to first price to clear the substantial inventory overhang through 2H20, leaving the commodity to lag the rally in related anticipatory financial assets like equities,” the Wall Street firm added.

Is Oil Rallying Too Fast Then?

Adding to these words of restraint, an inventory snapshot released by industry group American Petroleum Institute after the close of Tuesday’s market suggested that Cushing inventories rose by 2.7 million barrels last week—not 1.8 million as estimated by Genscape.

Industry group API did have a smaller number for last week’s build, at 8.4 million, versus the 9 million officially reported for the previous week by the EIA.

The EIA will report last week’s inventory numbers at 10:30 AM ET today (14:30 GMT), showing how accurate API’s snapshot is.

If the official numbers turn out to be more bearish than the market anticipated, then it’s a classic case of bulls forerunning expectations, say analysts.

“[The oil] market is still vulnerable,” said Per Magnus Nysveen, head of analysis at Rystad Energy.

“The existing problems did not magically get resolved, the storage constraint is still there … We remain very cautious short term, but our view is that we will see a price recovery on the longer term.”