Walt Disney Company (NYSE:) shareholders may have little reason to be cheerful after seeing the company’s latest report on Aug. 6. It didn’t give them what they wanted: the continuation of the streak of earning wins that have pushed its stock to a record high this year.

Instead, the shares of the House of Mouse took their worst beating in nearly four years after missing on profit forecasts in a quarter which saw the opening of the most highly anticipated theme-park attraction in the company’s history. The shares plummeted almost 5% on Aug. 7, though they recovered some of those losses yesterday to close at $137.89. 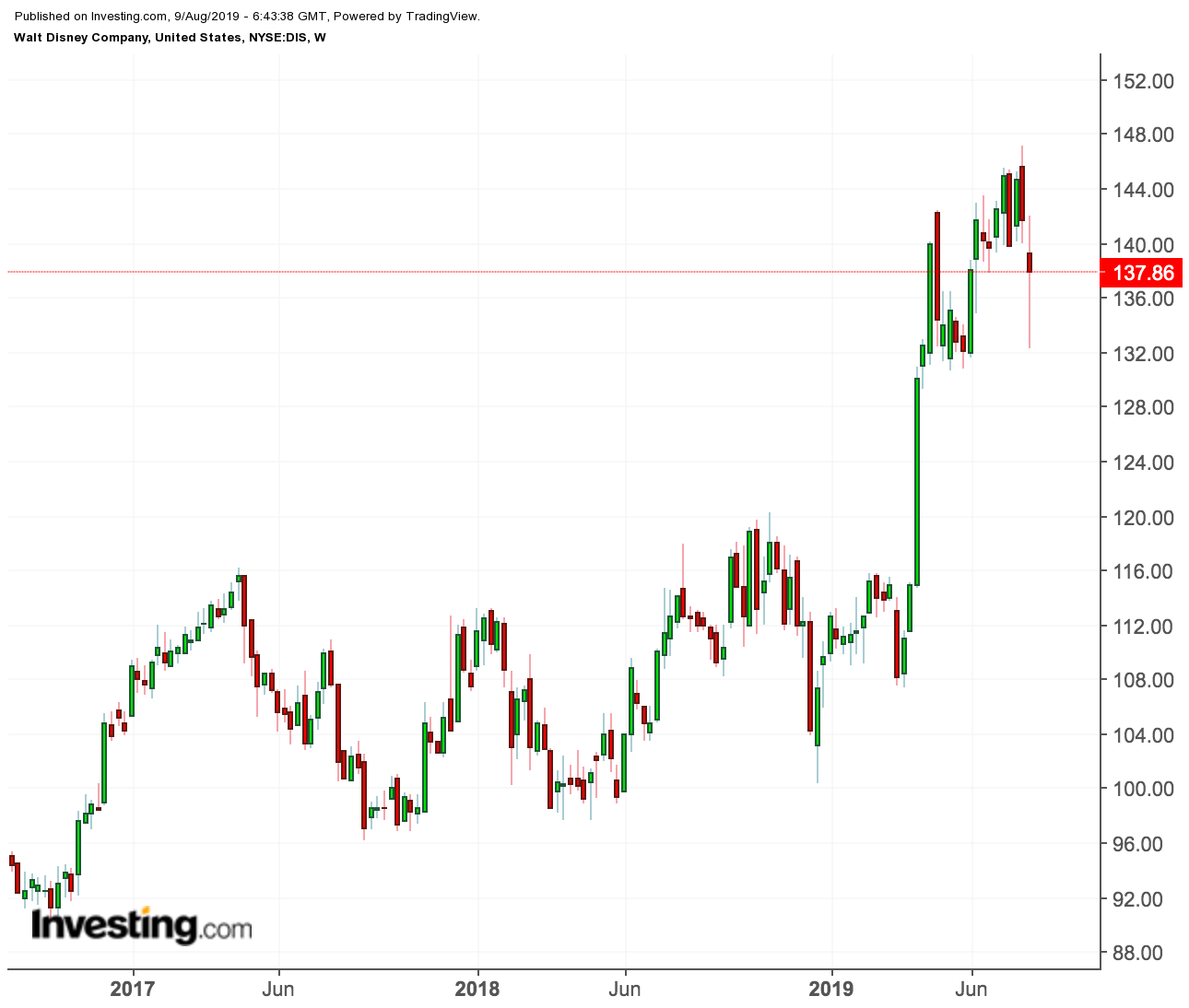 Profit at the company’s domestic resorts fell in the quarter after the opening of Star Wars: Galaxy’s Edge in the Disneyland resort in Anaheim, California, failed to attract large crowds, dragging the segment lower. Further adding to the disappointment was the poor performance from the company’s film division.

Despite the releases of “Avengers: Endgame,” the highest-grossing movie of all time, as well as “Aladdin” and “Toy Story 4,” that division also fell short on expectation as “Dark Phoenix,” a Marvel movie inherited in the $71 billion acquisition of Fox assets, flopped, forcing the company to take a write-off.

Technically, the setback in one quarter shouldn’t change much for Disney: the company has shown strong earnings momentum during the past year in which CEO Bob Iger worked quite successfully on his turnaround plan to spur growth. Even after the deep dive on Aug. 7, Disney shares are still up almost 26% this year, compared with a 16% expansion for the .

That being said, what’s worrying investors is that Disney is losing its earnings momentum at a time when it’s entering one of the most ambitious growth plans of its recent history. The company is investing heavily to win back subscribers who decamped to streaming providers such as Netflix (NASDAQ:NASDAQ:).

Disney had earlier warned that 2019 would mark a tough fiscal year as the company goes through an internal transition after acquiring most of 21st Century Fox, even as it develops programs for its flagship Disney+ service scheduled to be launched on Nov. 12.

With its earnings report, Disney announced that it is pricing a new bundle of streaming services at a surprisingly low $12.99 a month, with a package that includes family programming, live sports and a vast library of television shows. The entertainment giant announced that the combined pricing for Disney+, ESPN+ and Hulu will represent nearly 30% discount to their individual prices.

But all this means higher costs and lower profitability if Disney’s traditional businesses aren’t there to quickly fill that gap. In the last quarter, spending on movies and TV shows for new online services resulted in a $553 million loss in Disney’s direct-to-consumer division.

That figure may balloon to $900 million in the current quarter, Christine McCarthy, Disney’s chief financial officer, said on the earnings call. The service is likely to have between 60 million and 90 million subscribers by the end of fiscal 2024, the year in which the company expects to achieve profitability on this segment.

Despite Q3 setback, we don’t think Disney shares have lost their appeal. It was no secret that 2019 was going to be a transition year for Disney, as the company takes Fox assets on board and spends on investing in the three direct-to-consumer products.

We find in Disney a powerful brand with a lot of growth momentum. It priced its streaming product competitively and that will make it hard for consumers to ignore its Disney+ services, offering rich content and a lot of variety. For these reasons, this week’s pullback in Disney’s stock creates the ideal entry point for those who were sitting on the sidelines.