HomenewsCurrency ForecastDollar Rally Nearing An End? Plus Our BoE Outlook

Dollar Rally Nearing An End? Plus Our BoE Outlook

It may be Halloween but the last trading day in October was a not so scary day for the financial markets. The rose nearly 400 points intraday while the extended its gains. At the start of the NY session, month-end flows caused some profit taking on long dollar positions but the sellers returned right before the London close. The greenback rose to its strongest level against the in 2 months and its highest level versus the in more than a year. We also saw decent gains against the commodity currencies but the only significant milestone was , which hit a 1-month high. October was a very strong month for the greenback but as the end of the year starts to near, the dollar is vulnerable to a correction. We are still looking for the greenback to trade higher on , especially after Wednesday’s larger than expected increase in but other parts of the economy are reporting weakness. According to other reports released Wednesday, mortgage approvals declined while in the NY region expanded at its slowest pace in 6 months. Many of the major currencies have fallen to key support levels and if any part of the NFP report misses, investors will start positioning for less hawkishness from the Fed.

in particular is testing its 200-week SMA and if this holds, we could have a double bottom at 1.13. Eurozone data hasn’t been great – German growth was significantly weaker than expected but is on the rise and the recent decline in euro adds to the upside risk. ECB President made it clear this month that they plan to end asset purchases in December and while ECB said there could be a slight downward revision to their economic outlook, Draghi seems to be unfazed by recent data disappointments. In the long run, the weaker euro will help the economy.

Meanwhile in my deliriously jetlagged state, I wrote about the Bank of England meeting yesterday so I’m reposting my commentary today since the and Quarterly Inflation Report is Thursday.

It’s time to turn your focus to the because Thursday, when the will release its Quarterly Inflation Report in conjunction with a . They are not expected to change interest rates but changes to their economic projections and the overall tone of the report will have a significant impact on the currency. Sterling dropped to a 2-month low versus the U.S. dollar Wednesday as the BoE’s inflation report and Governor ’s comments will determine whether the currency falls through its August lows or turns higher from here.

Based on the persistent decline in , investors are bracing for the worst. While the following table shows widespread deterioration in the UK economy since the September meeting, it is important to realize that overall, the economy is doing well. The is low, is well above the central bank’s target and are on the rise.

The last time the Quarterly Inflation report was released the central bank also raised interest rates but at that time, crashed because the central bank made it clear that they had no plans to tighten again as talked about the scenarios that would require a rate cut if Britain failed to reach a deal with the European Union. Fast-forward 2 months and the UK is still no closer to an agreement. They are beyond the critical period of negotiations, which means Carney will be even more worried about the downside risks. As a result, traders cannot count on the central bank to rescue the pound because they’ve made it clear that the outlook for the UK economy hinges on Brexit negotiations. If the central bank cuts their economic projections or Carney spends a good part of his press conference talking about the possibility of easing, GBP/USD will drop to 1.26 and will head toward 90 cents. However if they downplay recent data deterioration and focus on the upside risk of inflation, the heavily sold GBP will reverse quickly as short covering takes GBP/USD back above 1.2850. 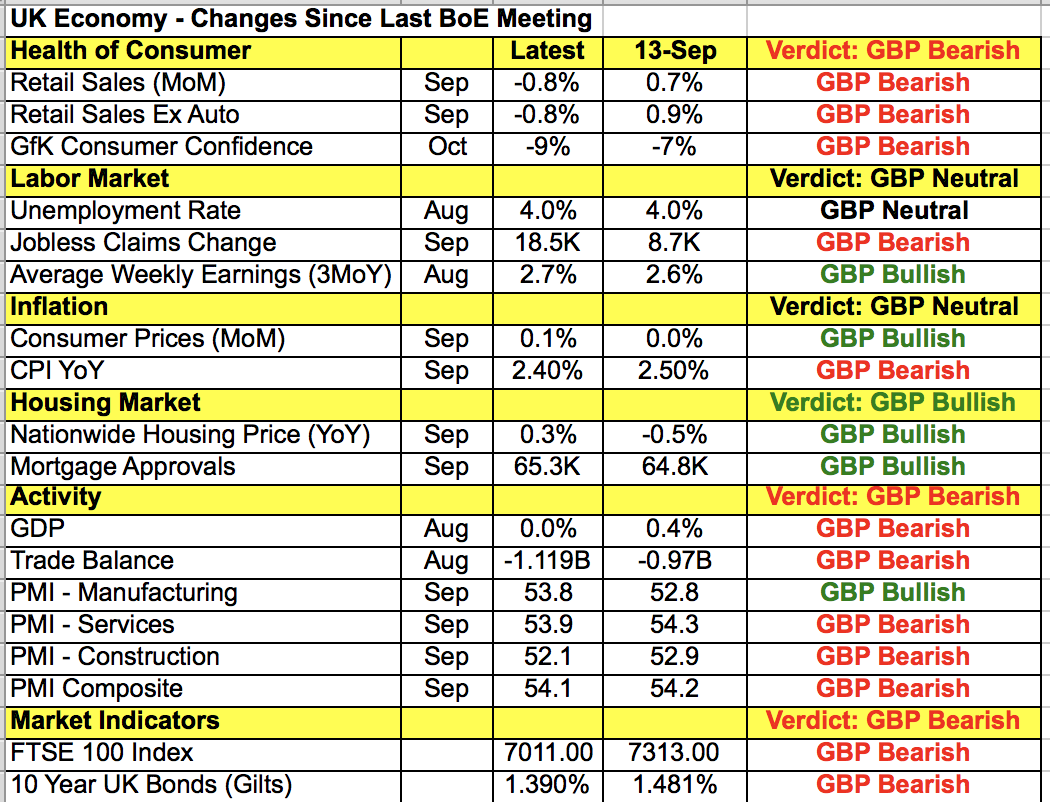 Lastly, all 3 of the commodity currencies traded lower against the greenback. Stronger-than-expected growth failed to help but the smaller increase in Australian and drop in NZ gave investors more reasons to sell and . In an environment where investors are bearish, the impact of good data is limited (hence the rally in USD/CAD) whereas the reaction to slightly weaker data can be exaggerated. The market was looking for CPI growth in Australia to rise by 0.5% but instead it increased by 0.4%, which drove the rate down to 1.9% from 2.1%. In New Zealand, the decline in building permits should have been offset by the slight improvement in business confidence. Regardless these reports and softer Chinese data prevented AUD and NZD from continuing their recoveries.