The Double Bollinger Band® strategy has a wide variety of applications but provides the most value when assessing the momentum and volatility of price action. It allows traders to pinpoint entries and exits as well as identify when a trend is maintaining or losing momentum.

What is a Double Bollinger Band® Strategy?

The Double Bollinger Band®Strategy makes use of two Bollinger Bands®in order to filter entries and exitsin the forex market. The strategy aims to enter long (short) trades when price breaks above (below)one standard deviation. The strategy can be applied to ranging markets, as a breakout strategy or when assessing the momentum/slowdown of an existing trend.

Add the following indicators to the desired market/security:

Before getting into the strategy, it is crucial to understand how to interpret the chart below as there is a lot to take in.

Statistically speaking, 95% of the observed candles should be contained within the two standard deviations, meaning traders will witness price moving within or across the various segments, triggering many signals.

All three zones can be seen in the chart below:

How to Trade Forex with Double Bollinger Bands®

The two main strategies to employ using Double Bollinger Bands® involve breakouts and trend trading and will be explored below.

The Double Bollinger Band® strategy can be applied when trading breakouts of an existing trading range by observing a break above/below the range; combined with a strong break into the DBB buy zone or DBB sell zone. Witnessing strong breaks provide a greater bias in favour of the breakout as traders look to avoid a false breakout.

When looking for further confirmation, traders can view that the break occurs during a new expansion of the Bollinger Bands®, after a period of relatively low volatility (contracting Bollinger Bands®).

The large green candle, pointed out below, provides the necessary confirmation of a breakout and presents a strong buy signal. To mitigate risk, traders can place stops at the 20 SMA with targets set at key levels of resistance all while maintaining a positive risk to reward ratio. 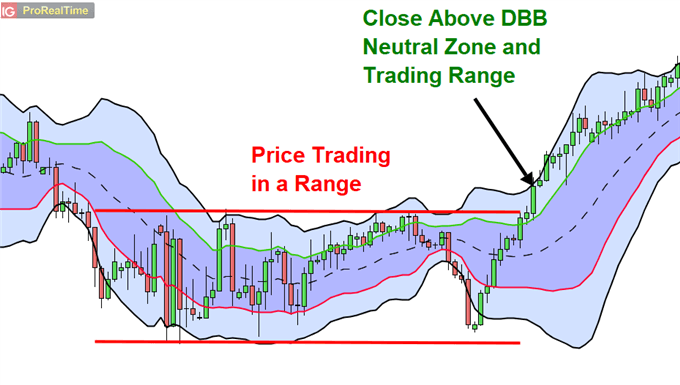 Such momentum and volatility in the DBB buy zone presents a buy signal and the Double Bollinger Band® can be used to track the progress of this new uptrend.

As long as price remains between the buy zone and the 20 SMA (dotted mid-line), traders can maintain the long bias. The exit point can either be on a close below the mid line or a breach of the neutral zone into the DBB sell zone, depending on the level of risk tolerance. Those using the mid-line as a stop can manually move their stops along the 20 SMA as price rises. 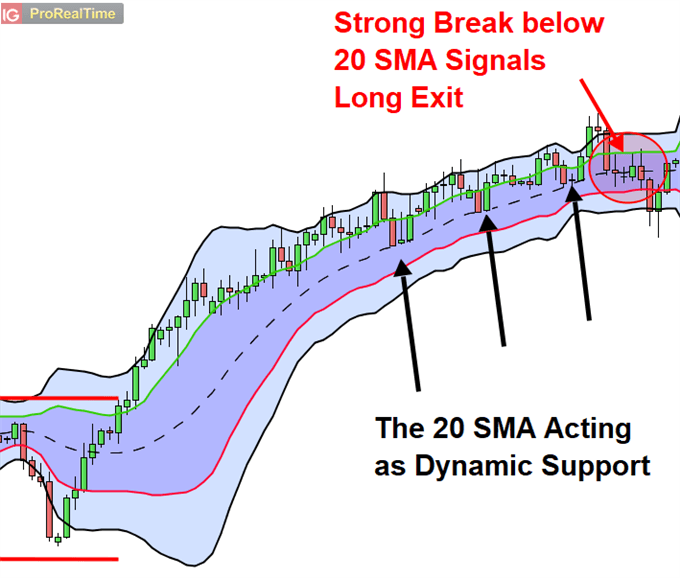 Advantages and Limitations of a Double Bollinger Band® Strategy

There is no such thing as a strategy that works all of the time. Bearing this in mind, traders should be aware of the advantages and limitations of the Double Bollinger Band® strategy.