Suddenly, central banks are falling like dominoes. The world’s two most important central bankers have abandoned their earlier reserve and are now talking more or less openly about cutting rates and loosening monetary policy after several others had led the way.

European Central Bank President Mario Draghi, who has been talking for months about how the ECB would raise rates months from now, last week not only postponed once again the date for any rise but did not exclude that the next move might be to cut rates. Moreover, Draghi said at the following the meeting of the governing council in the Lithuanian capital of Vilnius, some policymakers are talking about resuming asset purchases in an accommodation known as quantitative easing.

For the moment, the ECB followed through with its announcement of targeted long-term refinancing operations, or TLTROs—a way of injecting liquidity into the banking system. The terms were generous, ensuring that many banks, especially in the eurozone’s southern countries would take the loans.

Draghi’s quiet pivot back to his dovish roots followed the more dramatic reversal by Federal Reserve Chair Jerome Powell, who on Wednesday hijacked what was supposed to be a quiet review of how the Fed manages monetary policy by indicating that, contrary to his recent statements, the Fed stood ready to “act as appropriate” in the face of new risks from prolonged trade tensions. Markets correctly interpreted “appropriate” as meaning a rate cut, indicating Powell was ready to abandon his patient stance if necessary to counter the dampening effects of tariffs on economic growth.

As if to underscore the risk, labor market figures released on Friday showed a 75,000 jobs, far below the robust figures in recent months of hundreds of thousands of new jobs.

The policy reversal by Powell and Draghi comes as central banks in and cut benchmark rates last week, following a May in which a slew of emerging markets cut rates.

Powell’s pivot ensured that Draghi’s dovish tones would have little impact on the as investors considered the impact of a U.S. rate cut to be more important. Also, most analysts agreed, more imminent, given the more direct impact of the trade war on the U.S. economy. Besides, the Fed has much more room to maneuver. Its benchmark rate is currently 2.25-2.50 while the ECB’s is already at zero. 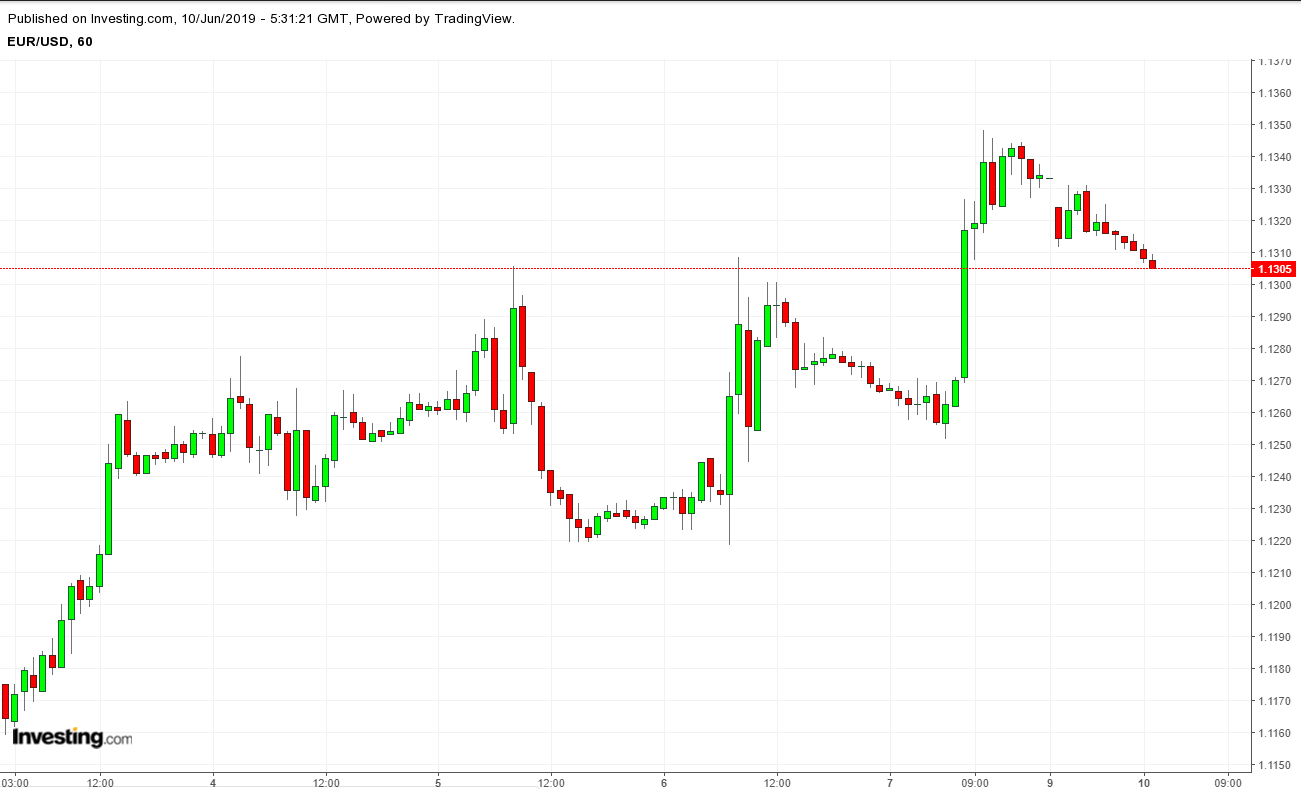 In fact, the euro rose in the wake of the ECB meeting, breaking through the 1.13 barrier against the dollar.

The ECB has delved into negative territory with its -0.4% rate on bank reserves, and could do the same with its benchmark. A resumption of asset purchases might be an easier path. Draghi said the ECB was ready to use “all the instruments that are in the toolbox.”

Draghi said the bank would not consider raising rates until mid-2020, six months later than his previous forecast. When asked if the next move on rates would inevitably be a hike, however, he answered, “No.”

The surprise in all this is that Draghi, who seemed content to coast into retirement with the ECB on autopilot, is now contemplating loosening policy once again and has already tied the hands of his successor with forward guidance promising no hikes before mid-2020.

This would not seem to improve the chances of Bundesbank President Jens Weidmann, a vocal hawk who has publicly opposed many of Draghi’s policies. Weidmann’s accession would be seen as a disruption from the path set out by Draghi. French central bank president François Villeroy de Galhau would seem a smoother transition and he leads some surveys on the succession.

This is why two Finns, the current and immediate past governors of the central bank, Olli Rehn and Erkki Liikanen, respectively, are hoping to succeed as compromise candidates. The issue there, in the EU’s convoluted process of allocating to jobs, is that if Denmark’s Margrethe Vestager gets the nod as European Commission president, it would be difficult to put another Scandinavian in the ECB post. Nor can one forget France’s highly developed amour propre and sense of entitlement for one of the top EU posts.