See our Q3 EUR forecast to learn what will drive the currency through the quarter.

EUR Unchanged as the ECB Stands Pat on Monetary Policy

Unsurprisingly, the ECB has stood pat on monetary policy with the refinancing, deposit and marginal lending rates left at 0%, -0.4% and 0.25% respectively, as expected. Given last month’s announcement regarding tapering of bond purchases later this year, little was expected from this meeting. Guidance from the ECB was also left unchanged with the central bank stating that “QE purchases will finish at the end of the year, subject to incoming data confirming medium term inflation outlook”, while “rates are expected to remain at current levels at least through summer of 2019”.

As such, a minimal reaction has been observed in the Euro, while price action in German bond yields were also relatively muted post the monetary policy decision. Consequently, focus will now rest on ECB President Draghi’s press conference at 1230GMT with comments likely to centre around clarity regarding interest rate guidance, alongside the current risks that trade wars pose. Remember, the risk premium attach to the meeting relatively tame with break-evens at 60 pips, while large EURUSD option expiries at 1.17 and 1.1735-40 have also contained price action. 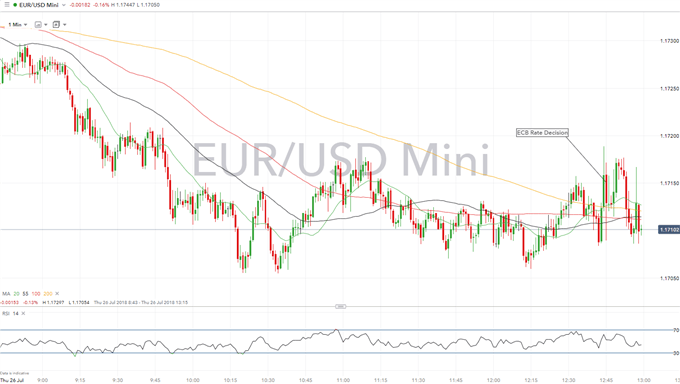