Equities: Where Do We Go From Here?

North American stock markets have continued their march higher in April with a 3.9% and 3.0% gain for the S&P 500 and the S&P TSX, respectively. Since the beginning of the year, those indices have grown by 16.4% and 14.6%. New record highs have been reached. Investors’ net bullish sentiment for the next six months is at its highest level since January 2018 (chart 1).

The obvious question now is whether stocks can continue their march higher. The short answer is yes; we still recommend a moderate tactical overweight equity exposure versus bonds (55%/45%, see table below), but will look for an opportunity for a tactical retreat sooner or later in the year. To flesh out this month’s recommendation, we lay out the reasons why equities rose in the first place in April. 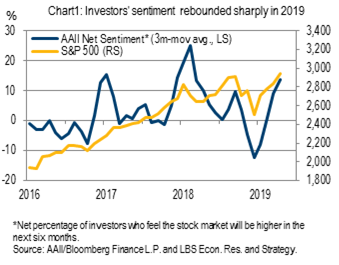 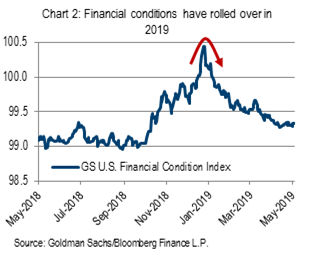 First, following a spike in late-2018 induced by such factors as higher interest rates and the Federal Reserve’s balance sheet reduction, financial conditions have eased considerably in the first four months of 2019 (chart 2). Indeed, witnessing fading economic momentum, spiking volatility and plunging equity markets, central banks around the world rolled back the prospect of future interest rate increases at least until the end of this year. This raised equity valuations directly, since they are commonly discounted based on the risk-free rate of interest, and indirectly, as markets incorporated that financing conditions would not tighten further and that the darkening of both the earnings and economic growth outlook would improve.

Going forward, while we believe that market expectations of outright interest rate cuts by both the Fed and the Bank of Canada (BoC) are overblown and will somewhat recede over the coming months – they already have with the publication of some economic data and better-than-expected earnings growth – the overall dovishness of markets over monetary policy globally is unlikely to change rapidly. For instance, the BoC revealed two weeks ago in its latest Monetary Policy Report that it estimates the Canadian output gap to have been -0.5% in 2019Q1, up from a positive 0.4% gap (excess production over capacity) as recently as 2018Q3. Together with a significant downward revision of the Canadian economic growth forecast for 2019 (from 1.7% to 1.2%), it will now take much longer for excess capacity to be exhausted and start generating inflationary pressures. Hence, the BoC removed its tightening bias from its interest rate decision statement. South of the border, the Fed did not significantly alter its policy statement last Wednesday, affirming that its dovish outlook on inflation might be due to transitory factors while more or less confirming its intention to remain on the sidelines in 2019. All this supports our decision to remain slightly overweight equities in the next month.

One concern we have is that equity market participants seem to believe that central banks around the world will remain dovish indefinitively. The observation that realized CPI inflation is constantly falling short of the Fed’s 2% target, in spite of its very accommodating monetary policies for more than a decade, is leading many market participants to conclude that persistent downward revisions to inflation expectations are in the cards. Moreover, the belief that improved price measures by statistical agencies suggest lower inflation than what is being reported is also gaining grounds. This underpins the prevailing market sentiment that the next rate move by the Fed is more likely to be down than up. However, any shift towards a more hawkish stance in the coming months (which we believe is a distinct possibility) should have a disproportionate negative effect on equity markets. Therefore, we will remain vigilant as a tactical retreat towards a more neutral stance (or even a cash position), due by a light shift in the Fed’s tone, might be appropriate sooner or later.

Our expectation for a shift in sentiment is based on our belief that the economy is performing better than anticipated For instance, both U.S. and Canadian economic growth have surpassed expectations recently. Moreover, Chinese data has been surprisingly positive in the last month (chart 3). The encouraging March data on total social financing gave additional confirmation that the Chinese government is loosening its fiscal stance to offset very weak growth in manufacturing (chart 4 + section see below).

Finally, stronger-than-expected Chinese imports, for instance, and the eventual resolution of the trade conflict between China and the U.S. could significantly boost global growth, bringing along Europe, Japan, the U.S. and Canada and forcing central banks to re-evaluate their wait-and-see stance on interest rates. 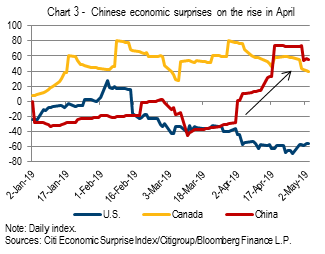 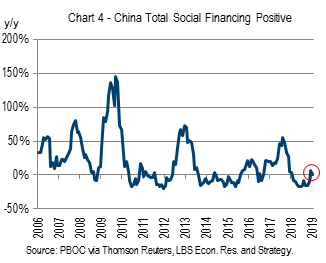 The (probable) removal of tariffs on Chinese exports

The 10% American tariffs imposed on $200 billion of Chinese exports to the U.S. are currently hurting the Chinese economy and global trade. The Caixin China manufacturing PMI barely managed to stay in expansionary territory in April. It stood at 50.2, down from 50.8 in March. Unsurprisingly, it was negatively impacted by another month of contraction in its new exports component. As we are publishing this report, U.S. President Donald Trump is threatening to increase (to 25%) and broaden (to $535 billion) tariffs on Chinese exports as soon as this Friday. This is having a strong negative impact on equity markets this morning. If enacted, such tariffs would undoubtedly negatively affect the Chinese economy and the global economic outlook.

While the narrative of a positive outcome is generally accepted by market participants, we believe that it was not fully priced in last Friday. Before Trump issued his new threat on Sunday, ambivalent signals sent by the U.S. administration relative to the imminence of a trade deal kept the markets from fully pricing in a favorable outcome of the trade negotiations. However, we continue to think that the United States firmly wants to reach an agreement with China on contentious trade issues. Hence, when a deal is reached and tariffs are lifted, the positive impact should be felt in equity markets. The market’s reaction to Trump’s weekend outburst only reinforces our expectations of the gains to be made once a deal is inked.

Corporate earnings not as bad as expected

With 78% of companies in the having published results for 2019 Q1, Factset estimates that last quarter’s earnings have declined by 0.8% y/y. This would mark the first y/y decline since 2016 Q2 (-3.2%). But, this decline is much less than what was anticipated at the end March (-3.9%), prior to the beginning of this earnings season. This positive surprise has led to an average 1.0% increase in U.S. stock prices.

It is now possible that earnings’ growth will end up positive in the first quarter of the year. At the same time, earnings forecasts for 2019 Q2 have been revised down a notch, as well as for the whole calendar year 2019 (chart 5). However, these downward revisions open the door, in our opinion, to another round of positive surprises if economic growth picks up in the second half of this year; a positive for equities.

Finally, from an industry perspective, out of the five sectors we recommended clients to overweight last month, four outperformed their respective index in both the U.S. and Canada. For May, based on positive momentum in prices and earnings, we continue to recommend overweighting these three sectors: information technology, telecommunication services and industrials. Since our call to overweight financials was based on an expected steepening of the yield curve (which occurred), we no longer recommend the sector as we do not forecast the yield curve to further steepen in the short-run. Additionally, short-term momentum indicators, such as, a temporary rise in initial jobless claims and the level of the S&P 500 index being above our estimated fair value, lead us to continue overweighting the defensive consumer staples sector and to add utilities to our equity overweight in both countries. 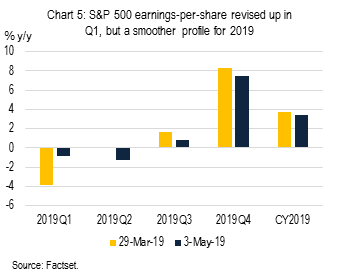