From corn fields in the U.S. Midwest to sugar cane growing patches in India, confusion reigns not just over rally , but also where leading biofuel ethanol should be trading.

, have had two explosive weeks, tracking the upswing in U.S. crude prices. They have also been largely higher over the past two months —  front-running the rally in oil, which only began at the end of April. 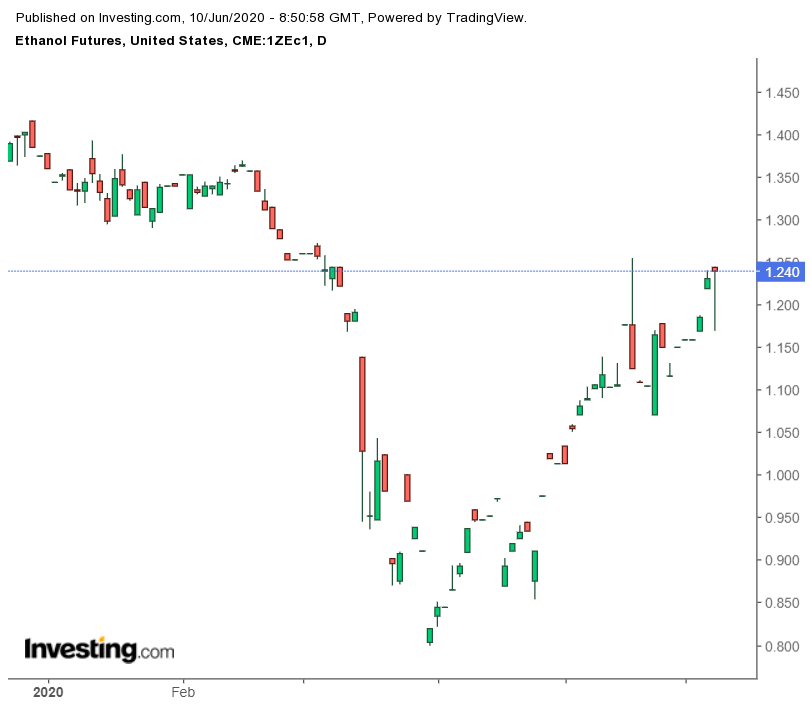 , one of the main feedstocks for ethanol, has turned negative over the past two sessions after a broad uptrend established since June 4.

, another ethanol source, is still in heading higher, though gains as of Wednesday were more modest, compared with the stronger performance over the past week.

“The sugar rally has paused (with oil) after retracing half (of) the Feb to April lower biofuel demand-driven price slump,” tweeted Ole Hansen, head of commodities strategy at Copenhagen-based Saxo Bank.

U.S. benchmark West Texas Intermediate crude itself was down almost 2% in early trade on Wednesday, after a dramatic 300% rally since the end of April.

The latest decline in WTI came on the back of weekly data from the suggesting had risen by 8.4 million barrels last week, against trade expectations for an increase of just around 1.7 million barrels.

The U.S. Energy Information Administration will issue official inventory numbers at 10:30 AM ET on Wednesday for crude, as well as key refined products, such as and that predominantly comprise diesel.

Dicey Outlook For Corn And Sugar

“The Brazil mills are producing sugar, but might switch back to producing ethanol soon if prices continue to improve for the ethanol,” Jack Scoville, vice president for agricultural trading at the Price Futures Group in Chicago said.

“Reports indicate that little is on offer from India, in part due to logistical and harvest problems caused by the coronavirus,” Scoville added.

“India is thought to have a very big crop of sugarcane this year, and getting into sugar and export positions have become extremely difficult. Thailand might also have less this year due to reduced planted area and erratic rains during the monsoon season.”

Back in April, when the U.S. and most of the rest of the world were still in strict lockdowns because of the COVID-19 pandemic, almost every investor was souring on oil. Ethanol, which in many countries is a compulsory additive for motor fuels, was even further from everyone’s mind.

But since WTI bottomed at just above $10 per barrel on April 28, the price of U.S. crude has reached almost $40 per barrel in six weeks, thanks to a sharp cutback in oil rigs and shutdown of wells. Production cuts by the Organization of the Petroleum Exporting Countries and its allies, aimed at removing 9.7 million barrels per day in global supply, also helped the rally in WTI and benchmark crude.

Now, there are concerns that crude prices have gotten way ahead of demand, especially with distillate stockpiles having risen 51 million barrels in the 10 weeks to May 29. And those concerns are hampering the outlook for ethanol too, say those in the know. 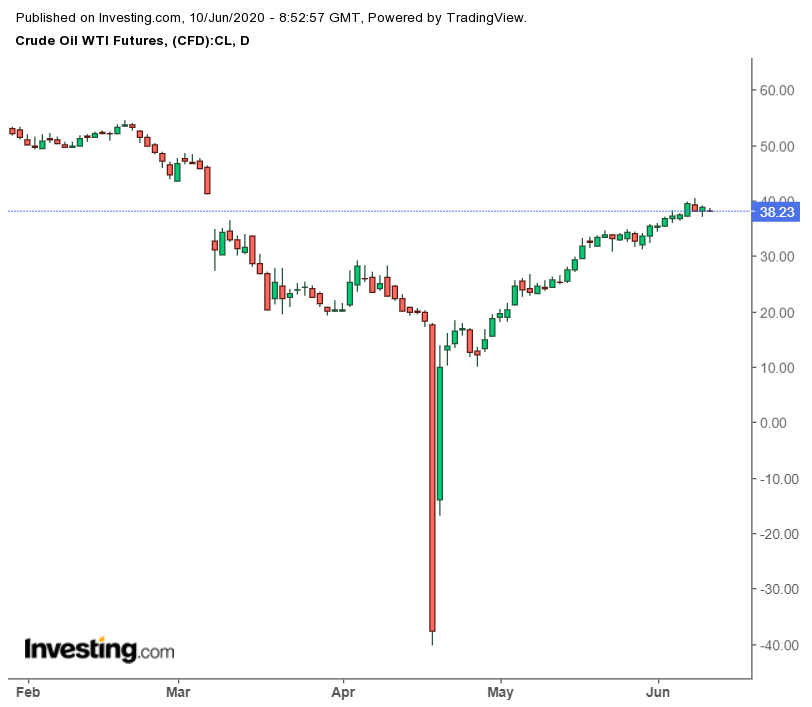 Randal Doyal at Al-Corn Clean Fuel in Claremont, California, said production of ethanol — a biofuel mandated for a 10% blend into gasoline — has also been creeping higher lately as stay-at-home orders imposed in many states to combat the coronavirus are gradually lifted.

“As soon as the indicators out there said you might be able to at least cover your cost, if not make a little money, everybody (got back) to producing again.”

U.S. ethanol production has increased for five weeks straight, according to some in the industry. “So we are going to over-produce again pretty rapidly,” Doyal said, voicing concerns as well about a possible resurgence in COVID-19 cases later this year and how the country might respond.

“With people learning they can work from home, there might not be as much of a demand for commuting fuel as there was before,” Doyal added.

“So I’m not sure where we wind up on this, but we haven’t seen the pain from our destruction of the economy yet.”

The EIA, in its Short-Term Energy Outlook (STEO) issued on Tuesday, slightly reduced its forecasts for 2020 and 2021 for both ethanol production and consumption.

Ethanol Consumption Seen Down For The Year

Overall, the EIA currently expects gasoline consumption to be down 26% this year. But it also suggested that fuel consumption could rebound as COVID-19-related lockdowns are relaxed.

The EIA estimates that the consumption of finished motor gasoline increased to 7.3 million barrels per day in May, up from 5.7 million barrels per day in April. The agency said personal travel numbers matched the trend of gasoline consumption. In its June STEO, the EIA cited data that showed that when compared to the last pre-lockdown week ending Feb. 29, weekly personal travel was down only 16% by May 29. It was down 47% by April 3.

Despite the EIA’s suggestion that travel and gasoline demand could pick up, some in the ethanol business remained gloomy over the outlook for the industry.

“The devastating impact of COVID-19 has hit many industries, but few were hit harder than biofuels,” Curt Blades, senior vice president at the Agricultural Services of Association of Equipment Manufacturers, wrote in an op-ed in “The Country Today,” a Wisconsin-based newspaper.

Blades said from farmers and producers to equipment manufacturers, the virus sent shockwaves through a sector already reeling from years of regulatory mismanagement.

Half the industry has been forced offline, and the outlook remains dim without action in Washington, he added.

“When producers are offline, the entire supply chain suffers — from farmers, to the 700,000 U.S. manufacturing workers who build agricultural equipment every day.”