EUR: After the largest intra-day drop in 2018, the Euro has extended on losses, breaking below 1.16 against the greenback and subsequently eyeing support at 1.15. However, initial support is seen at 1.1580 for now. The driver of the move has been the uncertainty surrounding Italian politics yet again following the governing coalitions decision to set a deficit to GDP target of 2.4% above the 1.6-1.9% threshold preferred by the Finance Minister Tria (Problems could mount if Tria leaves). In response to the budget announced, Italian bond yields are now at fresh highs with the 10yr rising over 30bps and wider by 38bps against the German 10yr, consequently weighing on the Euro. That said, Italian assets have plunged with the FTSE MIB losing as much as 900points with Italian banks hitting limit down.

GBP: The Pound is softer this morning, following a relatively weak growth report in which the yearly growth figure missed expectations. Elsewhere, business investment showed a surprise drop as investors remain concerned over the outcome regarding Brexit. GBPUSD hover around 1.3040 with the next key support at 1.30. Eyes will be on the Conservative party conference over the weekend, however, judging by historical performance the Pound may extend on losses early next week (Prior Tory party conferences saw a 1% decline in GBP).

CAD: The outperformer in the G10 space is the Loonie following a better than expected GDP reading, which took the spot rate back below 1.30. However, while data and rate expectations continue to keep the CAD afloat, the major concerns are centred around NAFTA and with no signs of any real progress, the pressure will likely mount for the currency. 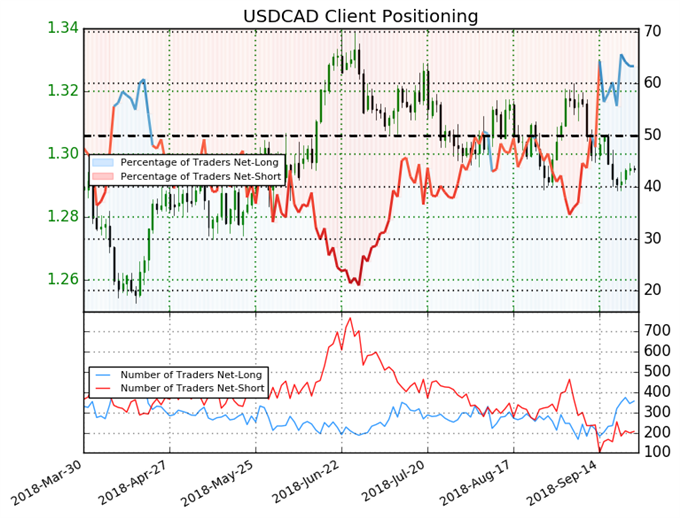 We typically take a contrarian view to crowd sentiment, and the fact traders are net-long suggests USDCAD prices may continue to fall. Positioning is less net-long than yesterday but more net-long from last week. The combination of current sentiment and recent changes gives us a further mixed USDCAD trading bias.