HomenewsNewsEUR/USD at Risk from Eurozone PMI, US Data, Fed Testimony?

EUR/USD at Risk from Eurozone PMI, US Data, Fed Testimony?

EVENT RISK IN US, EU

EUR/USD may be vulnerable to several EU and US data-driven events this week. On Tuesday and Wednesday, Fed Chairman Jerome Powell will be testifying in front of congressional committees in the Senate and House, respectively. Then on Friday, the Chairman will deliver a speech outlining economic developments and longer-term challenges to the economy.

Over roughly the same time span, key US economic data will be released that may have a significant impact on Fed monetary policy expectations. These include US GDP, consumer confidence and key ISM measures. If these indicators outperform relative to expectations, Fed officials may be more inclined to raise rates this year if data demonstrates the US economy can endure a rate hike.

However, when the Fed raises rates, they are also increasing the cost of borrowing globally. According to the Bank of International Settlements, eighty percent of all global transactions are conducted in the US Dollar. Tighter credit conditions would there disrupt economic activity and could come back to the US and hurt exports. These concerns were most recently conveyed by Fed Vice Chairman Richard Clarida.

In Europe, manufacturing PMI data is scheduled to be released in Germany, France and Italy, the three largest Eurozone economies. The latter is struggling with a technical recession and fracturing internal politics between the populist coalitions that make up the current government. The Germany economy stalled as GDP reports came in and only narrowly missed a technical recession after the previous quarter showed a contraction.

Slower growth in the region has also caught the eye of Fed policymakers in the US with the Clarida commenting that Europe is ‘not that far from crisis mode’. As one of the largest economies in the world, a substantial disruption in the region’s output would almost certainly impact global markets and the US economy and potentially alter the Fed’s data-dependent monetary policy.

France is seeing a decline in the economically disruptive Yellow Vest protests but is now experiencing political tension with Italy. Considering the upcoming European Parliamentary elections in the spring are approaching, political fragmentation between founding members of the Eurozone will likely continue to weigh on the Euro.

There is also still the lingering fear of a potential EU-US trade conflict following an auto report Donald Trump received last week from the Commerce Department. It outlined potential national security threats posed by imported autos. The EU has taken the possibility of auto tariffs seriously and announced it is ready to retaliate with similar measures against Caterpillar Inc. a US industrial giant.

The pair is climbing higher and appears to be breaching the 1.1358 resistance while having just closed above the late-January highs. Depending on the degree of the PMI data out of the EU, the pair may wobble on either side of this price barrier as investors anxiously wait for comments from Powell.

Despite the recent rise, it is important to keep in mind the bigger picture. Since April 2018, EUR/USD has declined over eight percent. The fundamental outlook suggests it will be difficult for the pair to have substantial upward climbs given the number of political and economic obstacles Europe must overcome. 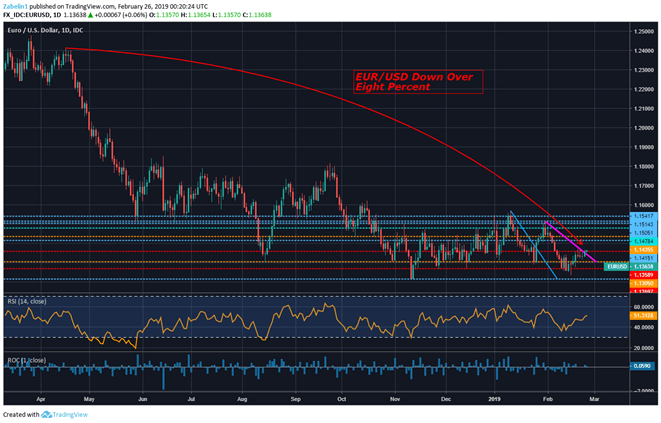