The Euro might be watching tomorrow’s release of German GDP amid fears of slower growth in key Eurozone economies. Both the previous report and forecast are in line at 0.0%, but there are lingering fears that Germany may report a contraction. The risk being that if the largest Eurozone economy reports negative growth for two consecutive quarters, it will have entered an official technical recession.

Following the GDP report, the IFO surveys – measures used to gauge sentiment for economic activity – will be released and may offer key insight on how policymakers feel about the outlook. Eurozone inflation data across various time measurements is due the same day, which may also influence the Euro.

Fundamental themes that (especially Euro) traders are likely to keep their eye on in the coming weeks are Brexit and trade wars. There is a possibility that the EU might be a next possible target if Trump declares victory in the US-China trade negotiations. This concern resurfaced after a report was given to the President which outlined potential security threats posed by auto imports.

If a tit-for-tat dispute were to erupt, it would likely push EUR/USD down and the ensuing risk aversion might propel the US Dollar up. Adding to the fun is the additional possibility of another Rome-Brussels clash over Italy’s controversial budget amid the country’s recent dip into a recession.

In the more immediate time frame, EUR/USD has been struggling to consistently trade above 1.1358 and may dip toward the 1.1305 support if incoming German GDP comes in negative along with disappointing Eurozone CPI. The fundamental outlook for European political economy seems to suggest any substantial upward moves are not likely to occur anytime soon. 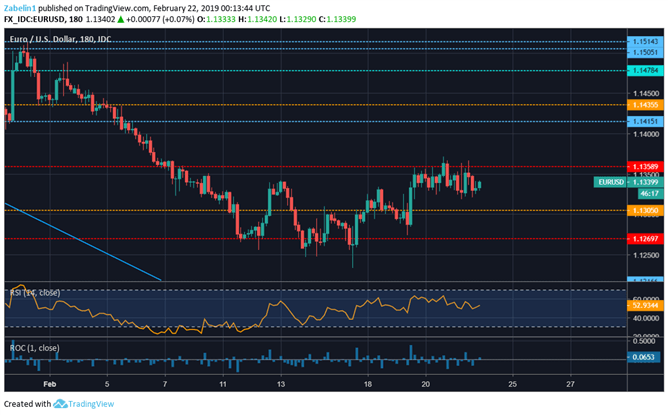