USD: The US Dollar is the outperformer today following yesterday’s Fed monetary policy meeting. Despite the initial dovish reaction to the dropping of the word “accommodative”. The USD firmed as Chairman Powell remained upbeat over the economic performance, adding that fiscal stimulus continues to provide a tailwind. Elsewhere, strong US data has added to the positive Dollar sentiment with durable goods orders printing firmly above expectations, while PCE figures also rose above estimates.

EUR: Italian politics take centre stage once again with focus on the Italian draft budget announcement. Both the League and 5 Star Party have pushed for a larger budget deficit (above 2%), placing the Finance Minister, Tria, in a difficult position, given that he has pledged to keep spending under control and within the EU rules (under 2%). Consequently, a refusal to get on board with the coalition government’s plans may lead to his resignation prompting Euro lower.

CAD: USDCAD has continued its recent rise after the pair failed to make a firm break below the 200DMA. As such, the pair had broken above the psychological 1.30 level before breaching the 50 and 100 MAs at 1.3050. Concerns over NAFTA are beginning to mount yet again with the touted October 1st deadline looming. Given that there are little signs of an agreement emerging any time soon, CAD remains on the back foot.

IG Client Sentiment: US OilChart of the Day 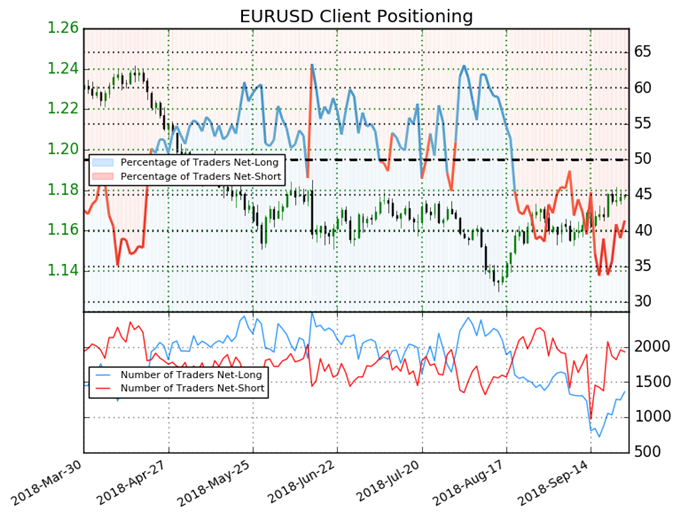