HomenewsAlertsEuro Treads Water as ECB Makes No Changes to Policy

Euro Treads Water as ECB Makes No Changes to Policy

– As was widely anticipated, the ECB’s Governing Council kept its main rates on hold and signaled its continued intention to end its QE program in December 2018.

– The press conference with ECB President Draghi will be watched for a discussion on Italy, given the recent drama around their budget and rising Italian BTP yields.

– EUR/USD barely reacted to the October rate decision and policy statement, trading in a 13-pip range since the release.

The Euro is holding its ground this morning following the release of the European Central Bank’s October policy statement and rate decision. As was widely expected, the ECB’s Governing Council kept the main rates on hold; overnight index swaps were pricing in a 0% chance of a rate hike.

Similarly, it was indicated that the QE program will run its course until December 2018 as intended, as which point the ECB will keep rates on hold for “as long as needed,” a timeframe that ECB President Mario Draghi has indicated to mean sometime around “summer 2019.”

Since the June 2018 meeting, the Governing Council effectively has policy on a preset course, and without a new set of Staff Economic Projections, expectations for any change in policy were correctly extremely low Like the Federal Reserve (with its Summary of Economic Projections) or the Bank of England (with its Quarterly Inflation Report), the ECB has a multi-year track record of only making significant policy shifts at meetings when it has new economic forecasts in hand.

If there’s one item of interest to monitor during ECB President Draghi’s press conference, it’s neither the timing of ending QE nor when the first rate rise will occur, but rather how the ECB views the situation unfolding in Italy. European bond markets have been hurting recently, with contagion spreading from Italy to Spain in recent days; both countries’ sovereign bond yields are at multi-year highs, and their spreads versus Germany are widening out at a quick pace.

Such an environment – one marked by continued tensions between Rome and Brussels over the Italian budget, as well as lingering concerns about the Turkish Lira’s depreciation impact on European banks – leaves open the possibility that, if ECB President Draghi is to change tact at all, the shift would be in a more dovish direction. 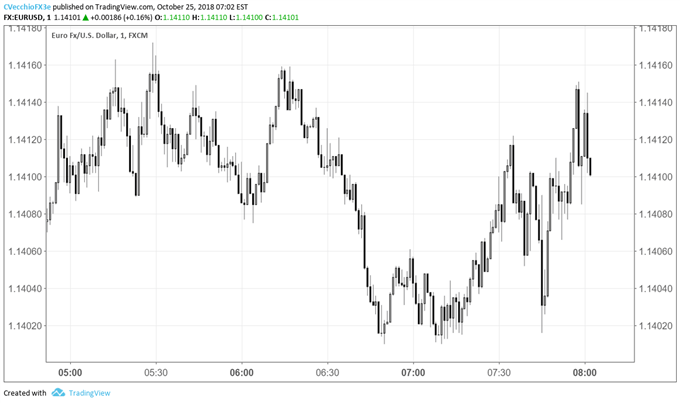 EUR/USD was barely changed around the rate decision, trading within a 13-pip range around 1.1407, from a low of 1.1402 to a high of 1.1415. Similar price action was observed among the EUR-crosses, with no pair making any significant advances or declines thus far.