Thursday’s European Central Bank monetary policy announcement is one of the most important event risks this week. With a seven-week gap between tomorrow’s meeting and the next, the ECB has one of two choices – it can take this opportunity to clarify its forward guidance or it can keep its assessment unchanged and bide its time until there is clearer evidence that European nations have gotten the third virus wave under control.

The chose the former. It left interest rates unchanged but tapered asset purchases by $1 billion and drew forward its rate hike forecast. Previously, the central bank did not expect to raise rates before 2023. Now, it sees no rate hike until the second half of 2022. Like the Eurozone, Canada is experiencing sharp rises in COVID-19 cases, with stay-at-home measures in many provinces. However, with a strong local jobs market and the U.S. economy recovering quickly, the BoC believes the COVID-19 pandemic will be less detrimental to the economy’s output than previously expected. It now sees the economy growing 6.5% this year, up from a prior forecast of 4%. The Canadian dollar soared after the rate decision, with dropping more than 150 pips intraday.
The Canadian dollar’s reaction to the BoC announcement could be a precursor of what the euro trades can expect tomorrow. From a data perspective, most economic reports haven’t been terrible. The Eurozone economy fared better than analysts anticipated despite widespread lockdowns. A contraction is expected for many Eurozone nations this quarter, but judging from the rally in the this month, investors are not worried about a lasting impact. They shrugged off weaker German ZEW and IFO reports and could do the same with April PMIs, which are scheduled for release on Friday. We saw this last summer when the prospect of a recovery drove EUR/USD higher before restrictions were eased.
Euro traders are usually very forward looking, and while the region’s vaccination rate lags far behind the U.S. and UK, every day, more and more of their population is getting vaccinated. The European Union resumed its usage of the Johnson & Johnson (NYSE:) vaccine, which should speed up the process. Europe is basically four to six weeks behind the U.S., which means it is only a matter of time before its recoveries gain momentum. The ECB knows this, and the big question tomorrow is whether it will acknowledge it. If the ECB expresses the same optimism as the BoC, EUR/USD could make a run for 1.21. If it remains cautious and suggests stimulus could increase, EUR/USD could test 1.19 with more significant losses for the euro against the crosses. 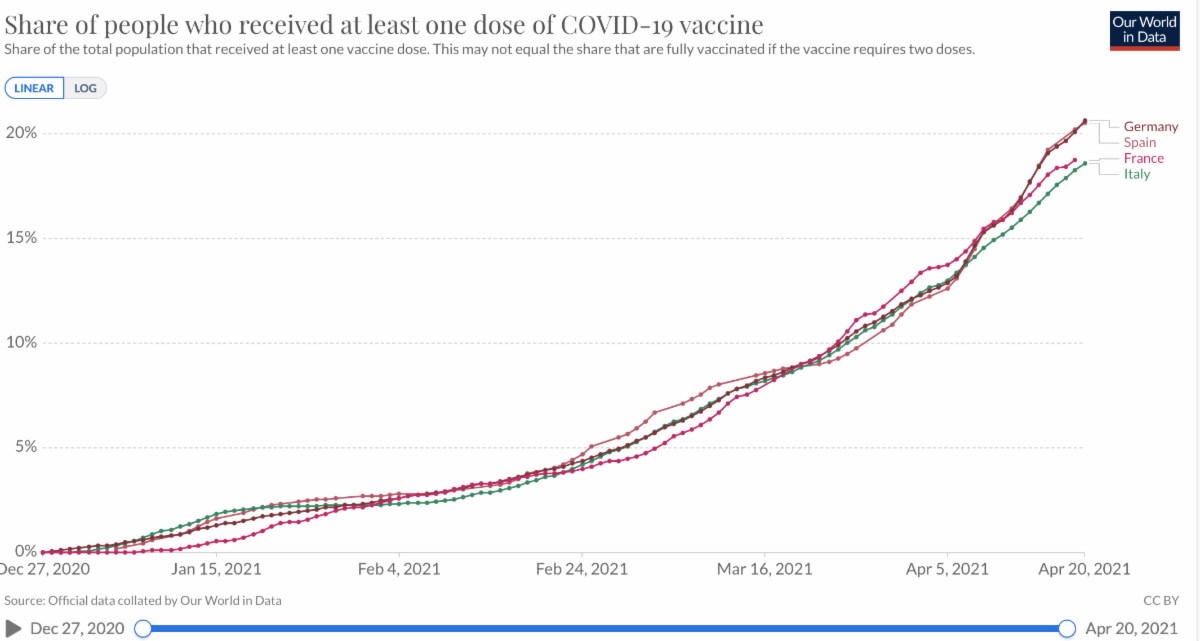