AUD: Overnight, the RBA lowered interest rates for a second consecutive month to a record low 1%. This had largely been in line with expectations as money markets attached an 80% likelihood of this taking place. In reaction to the decision, the move lower in AUD had been pared immediately with currency ultimately edging higher following the release. While the RBA Governor had highlighted that they stand ready to adjust monetary policy if needed, the central bank may well wait and see how the prior cuts will impact before delivering another rate reduction.

GBP: The Pound is broadly weaker across the board, following another round of weak UK data. Construction PMI crashed to a 10yr low of 43.1 (Exp. 49.3%), marking a second consecutive move of contraction territory. This also follows yesterday’s weaker than expected manufacturing PMI and further confirming that the UK economy had possibly contracted in Q2. However, with that said, eyes will be on tomorrows services and as a reminder, the sector accounts for roughly 75% of the UK output. Risks to GBPUSD remain tilted to the downside, however supoort at 1.26 holds

EUR: A subdued session for the Euro so far, which has failed to consolidate above 1.13. There had been an initial blip higher in the Euro following ECB source reports that policymakers were in no rush to cut rates at the July meeting, however, it does confirm that they could use that meeting to signal that easing will be on the way, possibly at the September meeting. Elsewhere, the USTR has proposed $4bln in potential additional tariffs over EU aircraft subsides, which in turn has kept upside somewhat limited. 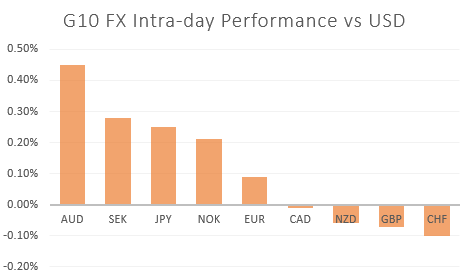