Italian politics is back in the headlines as deputy prime minister Salvini, head of the League party, has called for a fresh election as his relationship with co-deputy prime minister, M5S leader Luigi Di Maio continues to fall apart. The general unease between the parties has increased over recent months and now Salvini has said that it is ‘pointless’ for the government to continue as it no longer has the backing to survive. If an election were called, Salvini is expected to poll nearly double the votes of the M5S, potentially leaving the League able to govern if it forms an alliance with the far-right Fratelli d’Italia.

The European Union (EU) will be watching the situation in Italy closely with the League’s Salvini constantly locking horns with Brussels over their open-door immigration policy. Salvini has also been vocal about the need for the EU budget to be renegotiated, much to Brussel’s ire.

EURUSD continues to trade around 1.1200 and is finding it increasingly difficult to break higher, despite expectations of further interest rate cuts in the US. The ECB is now expected to cut rates at the September meeting and give details of a new quantitative easing program. A break below congestion between 1.1150 and 1.1160 will open the way for EURUSD to re-test 1.1107 before the August 1 low of 1.1027 comes into play. 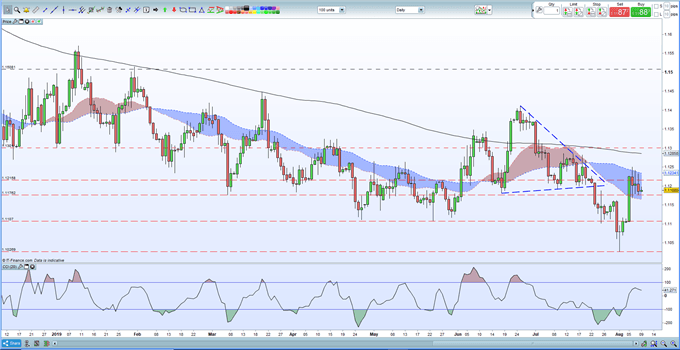 What is your view on EURUSD – bullish or bearish? You can let us know via the form at the end of this piece or you can contact the author at nicholas.cawley@ig.comor via Twitter @nickcawley1.