HomenewsAnalysisExxon Mobil: Is It A Buy Now That Oil Prices Are Recovering?

Exxon Mobil: Is It A Buy Now That Oil Prices Are Recovering?

Shares of energy giant Exxon Mobil (NYSE:) have plummeted quickly this year, and not just because of recent, indiscriminate market sell-offs. With the price of in a downward spiral, the fate of oil stocks is closely tied to the broader economy, which began collapsing after the global outbreak of coronavirus.

As the damage to economic growth intensified amid business closures and population lockdowns, demand for oil dried up. By mid-March Exxon Mobil’s stock had crumbled, losing about 60% and touching its lowest level in 23 years. 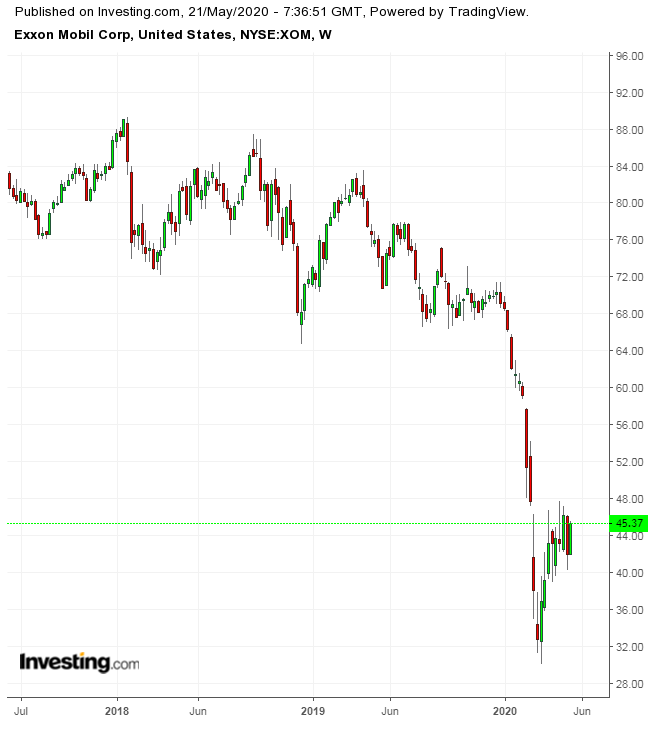 That massive slump forced the largest gas and oil producer in the U.S. to freeze its quarterly dividend at its current level, for the first time in 13 years and halt share buybacks entirely. In addition, the Irving, Texas-based company announced its first in decades, plus management slashed the company’s 2020 capex budget by 30%, to $23 billion.

Those drastic steps have raised questions about whether Exxon, one of the most reliable income stocks in the U.S., will be able to save its sacrosanct dividend—which currently yields 7.92% for an annual payout of $3.48—even after suspending payout hikes. That concern has become even more pressing after many big oil companies slashed their payouts in the recent earning season as they struggle to preserve cash.

Royal Dutch Shell (NYSE:) cut its dividend for the first time since World War II, reducing it by 66% to $0.16 a share. Oilfield services provider Schlumberger (NYSE:) slashed its dividend by 75%, its first cut in at least four decades or so.

Meanwhile, another oil and gas services company, Halliburton (NYSE:) held off cutting but also made it clear it would have no qualms doing so if necessary.

On March 16, S&P downgraded Exxon’s credit rating, to AA from AA+, and said it could happen again “if the company does not take adequate steps to improve cash flows and leverage.”

To cover its $14.7 billion dividend payment this year—the third-highest among S&P 500 companies—Exxon needed crude to fetch about $77 a barrel. Among oil majors, that’s the highest break-even according to RBC Capital Markets.

Meanwhile, the company’s debt has risen from effectively zero to $50 billion, and its profit last year was a bit more than half what it was a decade ago. In this highly challenging environment, Exxon management seem to have their hands tied due to the company’s historically strong commitment to rewarding its investors. According to CEO Darren Woods, one reason to defend the dividend is the fact that 70% of the shareholder base is made up of retail and long-term investors who rely on those checks.

The latest trend in oil markets suggests that Exxon may have passed the worst of this crisis as oil demand slowly begins to increase as countries re-open, reviving industrial production and bringing cars back onto roads.

According to a recent report, Chinese oil demand is all but back to levels last seen before Beijing imposed a national lockdown to fight the initial coronavirus outbreak. Since China is the world’s second largest oil consumer, behind only the U.S., the country’s quick turnaround has helped tighten the petroleum market sooner than expected.

West Texas Intermediate crude, which a month ago plunged into negative prices, surged on Wednesday, above $33 a barrel. With that rebound, Exxon Mobil shares also gained, trading more than 40% higher from their March low of around $31. Exxon’s rich dividend yield still signals to investors that this oil major will buck the trend and do what it takes to keep its dividend safe from any cuts.

In our view, Exxon will continue to borrow to fund its dividend. With interest rates at record lows and banks willing to lend, the energy giant has more incentive to use borrowed money to return cash, especially when it has already drastically cut its spending plans.

That said, Exxon doesn’t make a compelling investment case over the long-run relative to other opportunities in the energy space. Among industry peers, the company is the most exposed to negative headwinds, including from oversupply in oil, and liquefied natural gas. That situation is unlikely to change as the energy industry goes through a seismic shift.