In 2017 the Federal Reserve announce that they would slowly begin to shrink the balance sheet from October, starting at a rate of $10bln/month and working up to a maximum of $50bln, in order to unload the $4.5tln of bonds acquired by the central bank through its QE program. As such, the Fed are now in the process of letting the debt roll off its balance sheet by holding the debt to maturity and not re-investing the proceeds. Consequently, this typically creates a demand for Dollars, while also providing a drain on liquidity.

Throughout 2018, the unwind of the Federal Reserve’s balance sheet has coincided with an increase in equity market volatility, while equity prices have also taken a noticeable leg lower with major benchmarks hovering in bear market territory. If QE typically sparks a rally in equity prices, then one can assume that QT is likely to have the reverse effect. 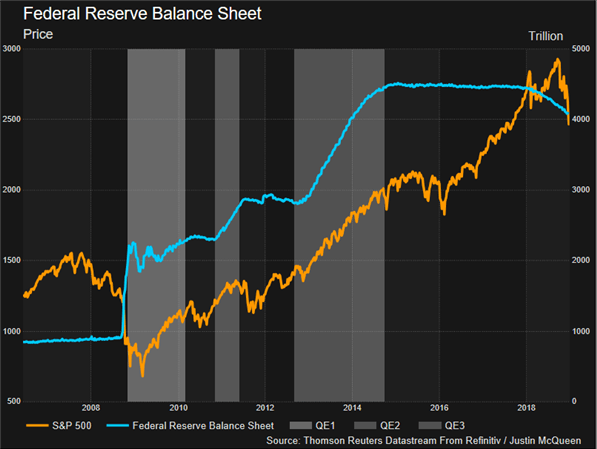 On SOMA days, the 5&P 500 has typically lost 0.1% during US market hours. That said, with the reduction of liquidity taking a notable effect on equity markets, the Federal Reserve may have to rethink its strategy and potentially announce a temporary pause in 2019 with regard to reducing the balance sheet.