Fed Getting Serious About Inflation Overshoot As Prices Stay Too Low

Federal Reserve policymakers think they have succeeded too well in anchoring expectations and need to nudge people out of their comfort zone. This is the latest message from Fed Chair Jerome Powell and his cohorts after reassuring investors they will be patient and not and they will stop paring down their balance sheet.

In his semiannual congressional this week, Powell acknowledged that inflation pressures remain muted, but maintained it would run close to the standing goal of 2 percent after current transitory effects have passed.

He was more forthcoming in response to concerns raised by Senator Patrick Toomey, a Pennsylvania Democrat, that the Fed was thinking about overshooting its target in order to get a 2-percent average. Powell hastened to explain that no decisions had been made but central bankers everywhere are wrestling with the question of how to un-anchor expectations that seem to have been permanently lowered by the long stretch of very low inflation.

“In our thinking, inflation expectations are the most important driver in actual inflation,” Powell explained. The FOMC wants to keep the 2 percent target credible, so that people don’t think it’s at 2 percent in good times and “way lower” in bad times. Toomey, old enough to recall the battle to contain inflation in the late 1970s, urged caution.

The two leading economists on the FOMC made a much more explicit case for overshooting the inflation target in a double-barreled presentation at a monetary policy conference in New York on Feb. 22. Vice Chair Richard Clarida described the inflation target as one of the principal considerations in a fundamental review of the Fed’s policy framework. The decline in the neutral or natural interest rate has reduced the Fed’s room to maneuver in a downturn. Persistently low inflation exacerbates that problem.

In addition, a flattening of the Phillips curve, which calls for inflation to increase as unemployment declines, has dragged down inflation expectations even further. This is leading Fed policymakers to consider a “makeup” strategy.

“The benefits of the makeup strategies rest heavily on households and firms believing in advance that the makeup will, in fact, be delivered when the time comes,” Clarida, a Columbia University economist, told the New York audience. “For example, that a persistent inflation shortfall will be met by future inflation above 2 percent.”

New York Fed president John Williams, who is ex officio Vice Chair of the FOMC and longtime chief economist at the San Francisco Fed under Janet Yellen, was less sure that the Phillips curve has flattened. Undeniably, however, inflation expectations have declined below the Fed target—a sign of “the Federal Reserve’s success in re-anchoring inflation expectations at a lower level.”

Over the past 25 years, Williams noted, inflation has averaged 1.8 percent, a persistent undershooting of the Fed target that risks undermining it. He concludes there are alternative frameworks under consideration that could do a better job of keeping expectations anchored where the Fed wants them. 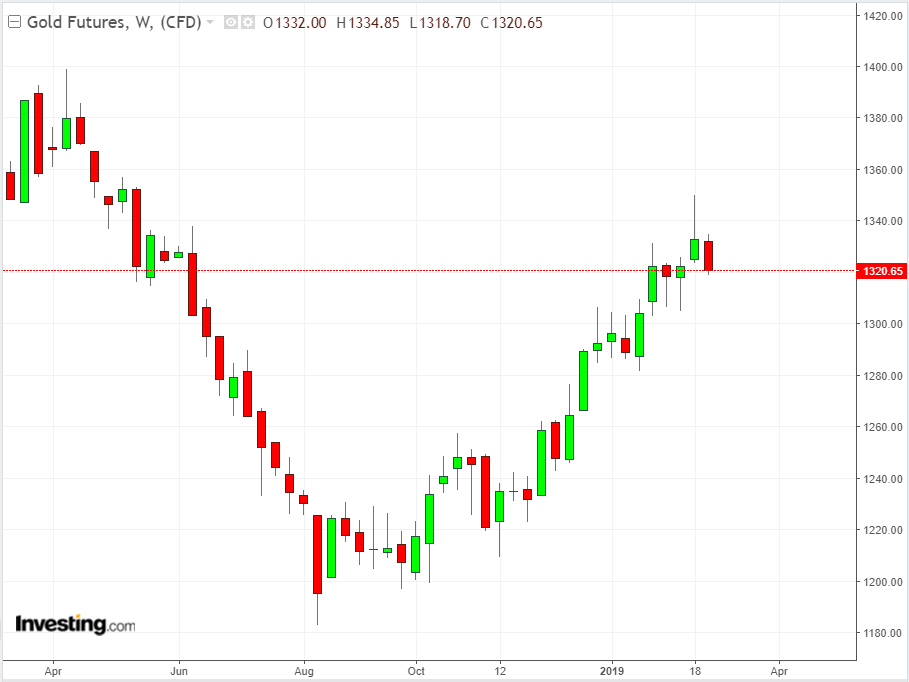 Ignoring some of the finer nuances of this academic debate, market participants immediately started bidding up as an inflation hedge and JPMorgan analysts recommended Treasury-inflation protected securities.

But the Fed can do little to boost inflation aside from talking it up. If it could, it would have long since done so.

Right now, there is nothing to hedge against by buying gold or TIPS. Senator Toomey can frown and worry but his concerns appear obsolete. The point Clarida and Williams are ever so gently making.