The big news from Wednesday’s Federal Reserve meeting wasn’t the Fed by a quarter percentage point, to a range between 1.75 and 2.0%. Markets already had that priced in. Rather, the surprise that emerged from yesterday’s meeting of the Federal Open Market Committee (FOMC) was that the little dots on the Fed’s dot-plot graph had been rearranged, now tipping the scale toward two more interest rate hikes this year.

The latest Fed graph showed eight of the 15 policymakers expect the Federal funds rate to be in the 2.25 to 2.5 percent range by the end of 2018, up two quarter-points from the range decided on Wednesday. That reversed the 8-7 majority seen in the previous dot-plot graph released in March, which indicated just three rate hikes total in 2018.

The updated official statement and Fed Chair Jay Powell’s remarks also tilted hawkish. They emphasized the strength of the US economy and the weakness of inflationary pressures. “The main takeaway is that the economy is doing very well,” Powell said in opening the press conference after the FOMC meeting. “Most people who want to find jobs are finding them, and and inflation are low.”

That’s the “plain-English” version of the official statement, which is always parsed for its nuances. And the new statement did, indeed, provide its share of nuance. For example, this time economic growth was described as “solid,” instead of the more cautious “moderate” in the May statement. Unemployment palpably “declined” instead of just staying low. “Adjustments” in interest rates became outright “increases.”

As always, the key to the Fed policy is inflation. But Fed policymakers don’t pay much attention to the Consumer Price Index () put out by the Labor Department, which showed an alarming 2.8 percent increase in May. Rather, they rely on the Personal Consumption Expenditures (PCE) computed somewhat more slowly by the Commerce Department. And they prefer the stripped-down version—the —which eliminates volatile food and energy prices. The core PCE in April was only 1.8 percent, still short of the Fed’s 2-percent target.

Thus the official statement Wednesday, which got unanimous approval from the truncated FOMC, noted that inflation would be running “near” the “symmetric” 2-percent target in the medium term. Symmetric indicates the Fed is willing to overshoot the target for a time because inflation has been low for so long. Powell said the committee’s view on inflation hadn’t changed since March—there are still no signs of any significant pressure.

The median forecasts of the FOMC members puts the core inflation for 2018 at 2.0 percent, little changed from 1.9 percent in March. It rises to only 2.1 percent in 2019 and 2020, according to members’ projections. Investors took note of the Fed’s hawkish tone and US benchmarks closed near their lows for the day. 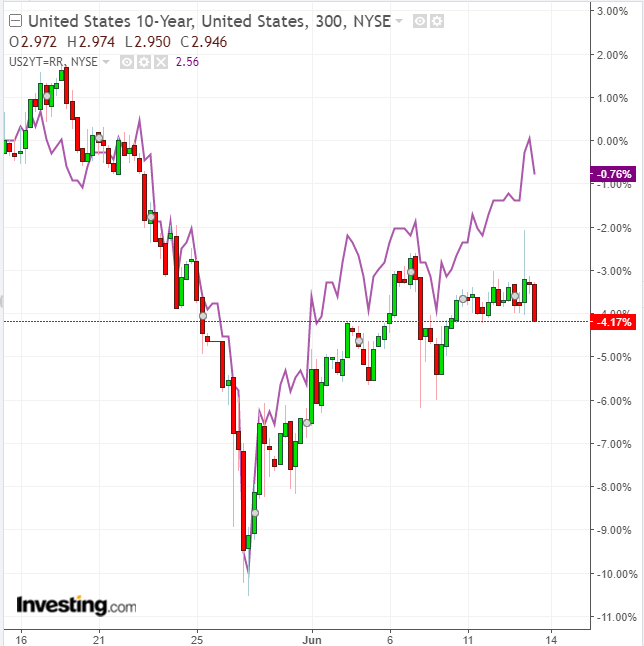 As well, the gap between and Treasury notes narrowed further, approaching the deadly inversion widely considered to be a predictor of recession.

The other news of note was that next year, the Fed will hold a press conference after each of the eight FOMC meetings, instead of just every other one as is done currently. This effectively makes each meeting “live,” because regardless of its protestations to the contrary, the Fed has never made a monetary policy move at meetings that didn’t have a press conference. This practice will also make the chairman’s megaphone even louder, allowing him to take the spotlight away from other board members and the regional bank presidents.

The FOMC is currently running at less than full strength since Senate Democrats have systematically blocked President Donald Trump’s nominees to the board of governors. There are currently only three members on the board, out of seven positions.