The Federal Reserve’s tendency to over-telegraph its decisions on interest rates leaves little to the imagination about what will happen when it officially makes the announcement on March 21, but investors will pay close attention to three principle factors in an attempt to suss out any hints as to future policy changes.

The now more-than-nine-year-old bull market has managed to take the Fed’s shift to gradual monetary policy tightening in stride since beginning the process back in December 2015, though the central bank seemed to hit a speed bump last month when Fed chairman testified to Congress that “some of the headwinds the U.S. economy faced in previous years have turned into tailwinds” and that the economy had definitely strengthened since the last time the Fed released economic forecasts in December, implying that the central bank chief could be considering a more aggressive pace of rate hikes.

Though potential trade war drama from U.S. tariffs quickly stole the show, weak in the February allowed investors to breathe a sigh of relief. The most recent reading of core annual inflation showed a third consecutive rise of just , while the core PCE price index, the Fed’s preferred inflation indicator, has been stuck at just for the last three months. Both readings remain below the Fed’s 2% target.

In any case, traders continue to eye developments over what has become the main debate in markets: will the Fed hike rates three or four times this year?

Market participants are aligned with the Fed’s own prediction last December that there would be three increases in 2018, but they still seem to be chewing over the possibility of an additional move this year.

Perhaps the most telling factor is not that Fed fund futures put the possibility at around 70% for the third hike to come in December, but rather that the possibility of a fourth move, although still below the 50% threshold, has crept up to around 30%. All while keeping in mind that market odds for the third hike passed the 50% mark as soon as the September meeting this year. That’s a major shift in market expectations considering that when the December jobs report was published on January 5, the probability for a total of three hikes in all of 2018 didn’t even reach the 50% threshold.

So while markets have become accustomed to a dull announcement on rates from the Fed, the March meeting is still not a date that they can afford to overlook as it is accompanied by updated and the famous “dot plot” that maps out, anonymously, predictions of individual Fed members for the future path of rate hikes.

The December projections (see chart below) showed the median forecast to be for three hikes in 2018, even when two of the voting members, and , openly dissented against the vote to hike at the December meeting in favor of their preference for holding rates steady. 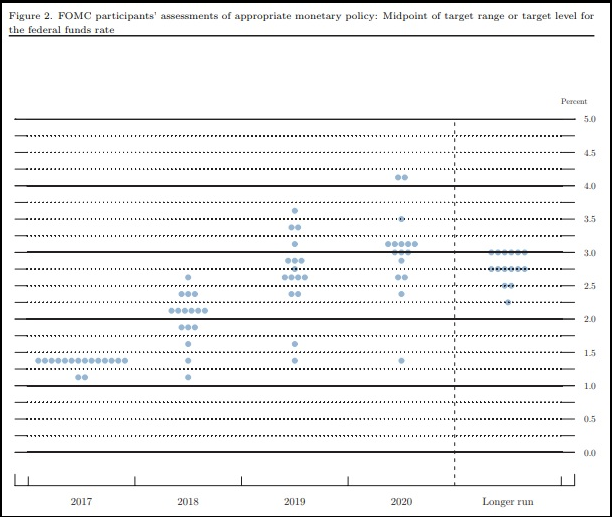 As part of the regular annual rotation of voting rights for Fed presidents (excluding the NY Fed chief who always has a vote, four of the remaining eleven Reserve Bank presidents serve one-year terms on a rotating basis), both Evans and Kashkari have rotated out of the vote this year, leaving investors to peruse the end of the FOMC statement to see if any objections to the rate hike arise in this round, following the unanimous decision to hold steady at the last meeting in January.

Beyond the updated forecasts for growth, inflation and unemployment in the economic projections, the major focus of markets will be on the adjustments to the interest rate forecasts to see if the Fed is shifting to a slightly more aggressive policy stance.

Finally of course, all eyes will turn to the to be held 30 minutes after the release of the statement and economic projections. Although this will be Jerome Powell’s first since taking over the helm from former Fed Chair Janet Yellen in February, he already gave his first testimony to Congress at the end of February.

At the congressional hearings, Powell caused nerves to twitch throughout markets as he delivered his upbeat outlook (note movement, below, during his House testimony). “My personal outlook for the economy has strengthened since December,” the new Fed chief stated at that time. 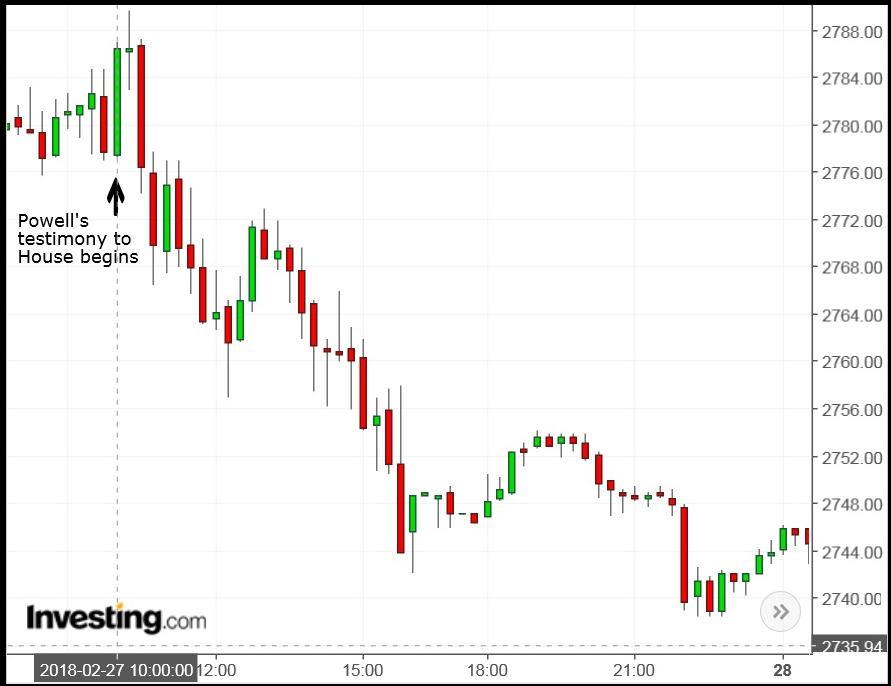 But if anything, Powell made clear that he would follow the example of his predecessors Janet Yellen and Ben Bernanke in the formation of a collegial committee that follows consensus opinion. He made clear that he could not predict how other policymakers might have adjusted their outlook.

“I wouldn’t want to prejudge that new set of projections,” he explained.

That said, the Fed chief will be fresh out of a meeting with his fellow policymakers with the updated consensus opinion newly out of the oven. If Powell communicates that his colleagues have clearly joined the upbeat outlook delivered to Congress and the rosier picture has shifted the general opinion towards a more aggressive—or, perhaps more aptly put, “less gradual”—policy tightening outlook, stocks could well mirror the negative reaction seen during Powell’s testimony.