Policymakers at the Federal Reserve have let the cat out of the bag.

The of the April meeting of the Federal Open Market Committee, released last week, had this to say:

“A number of participants suggested that if the economy continued to make rapid progress toward the committee’s goals, it might be appropriate at some point in upcoming meetings to begin discussing a plan for adjusting the pace of asset purchases.”

“Many participants highlighted the importance of the committee clearly communicating its assessment of progress toward its longer-run goals well in advance of the time when it could be judged substantial enough to warrant a change in the pace of asset purchases.” 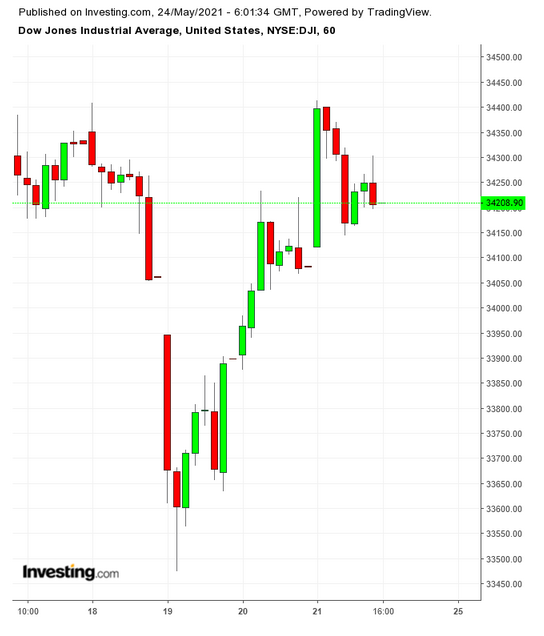 The plunged more than 580 points last Wednesday, even before the announcement, as mounting inflation concerns led to a sell-off of and other risky assets. The Dow’s losses were trimmed to about 164 points by the end of trading. More telling, the yield on the benchmark Treasury note spiked to nearly 1.7% before receding.

The minutes’ veiled warning was couched in the rote language that it would likely be some time until the economy made “substantial further progress” toward the Fed’s goals of maximum employment and stable prices, but there it was—the sign that the FOMC is not completely ignoring the increasing evidence that inflation, transitory or not, is a reality.

Inflation hawk Larry Summers, the former Treasury secretary, said when April data was released earlier this month that prices were rising faster than even he expected.

Summers, who was at one point promised the job of Fed chairman but never got the nod, ratcheted up his criticism of the central bank last week. At an Atlanta Fed event, he accused the Fed of creating a “dangerous complacency” in financial markets and underestimating the risks of inflation and financial instability in their low interest-rate policy.

The Harvard economist is already on the record for criticizing the $1.9 trillion American Rescue Plan passed in March as “the least responsible macroeconomic policy we’ve had in the last 40 years.” Summers’ forecasts have not always been right in the past, but his Cassandra-like warnings continue to raise concerns.

Raphael Bostic, president of the Atlanta Fed, gave a more tempered response in an interview last week, but said he is open to “every scenario.” He added:

“I am paying attention. And because this is such an unprecedented time, I am going to be try to be as prepared as I can for whatever happens coming down the road.”

Dallas Fed chief Robert Kaplan kept up his drumbeat of urging the Fed to consider tapering its bond purchases “sooner rather than later.” He came back to the metaphor that he has used before that it’s time to “maybe take the foot off the accelerator” to avoid having to “press on the brakes” down the road.

Patrick Harker, head of the Philadelphia Fed, added his voice to those calling for talks on tapering, echoing Kaplan’s “sooner rather than later.” He said reducing the bond purchases would be a “first step” in a gradual tightening of monetary policy.

The FOMC’s next policy meeting is June 15-16, followed by a meeting in late July, and then the Jackson Hole symposium in late August. Investors and traders seem to expect Fed Chairman Jerome Powell to hold off on any tapering announcement until that August symposium, but the increasing pressure may force the Fed’s hand earlier.

If the Fed manages to wait until August to make an announcement, investors expect the actual process to start in early 2022. But as the Scottish poet Robert Burns warned long ago, the best-laid plans of mice and men often go awry.