For Natural Gas, Negative U.S. Crude Is Manna From Heaven

Natural gas bulls know a thing or two about negative pricing. They also know when it’s time for their fuel to make some hay — especially now, as the sun gets blotted out on gas’ more illustrious cousin, crude oil.

Long before Monday’s sub zero prices for U.S. crude, next-day natural gas at the Waha hub in the Permian Basin in West Texas had gone negative several times. In fact, almost exactly a year ago — on April 22, 2019 — Waha averaged minus 40 cents per million British thermal units.

That phenomenon was due to a supply glut exacerbated by the associated gas that came from shale oil drilling at the Permian, the second biggest shale gas basin in the United States.

NatGas Market Slammed A Year Ago, While Oil Was Rocketing

When natural gas was getting gutted a year ago, oil was going through the roof. The front-month in U.S. hit near 6-month highs at $66.30 per barrel on April 22, 2019, as President Donald Trump’s crackdown on Iranian oil exports created an artificially tight market for oil.

Fast forward to a year later and the contrast couldn’t be more stark. 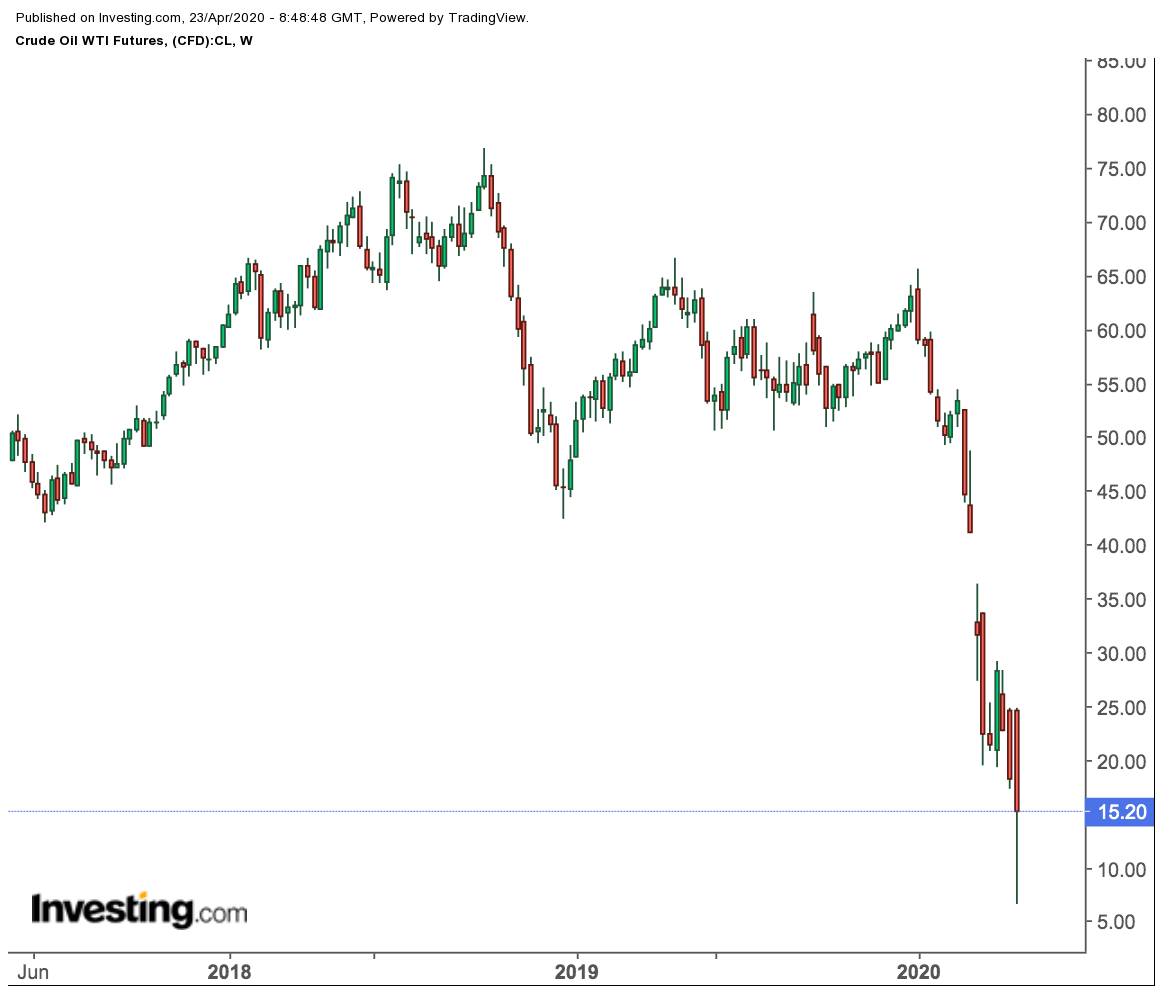 WTI had its in history this week due to a tsunami of crude that landed on the market without buyers or storage space as economic lockdowns forced by the coronavirus pandemic triggered an unprecedented loss of demand.

But on the New York Mercantile Exchange’s Henry Hub hit nine-week highs of $1.97 per mmBtu this week. Reason? The same factors behind the oil crash — that the overwhelming supply situation in crude would correct itself through production cuts in shale that would take a good deal of associated gas off the market—are improving the fuel’s fundamentals. 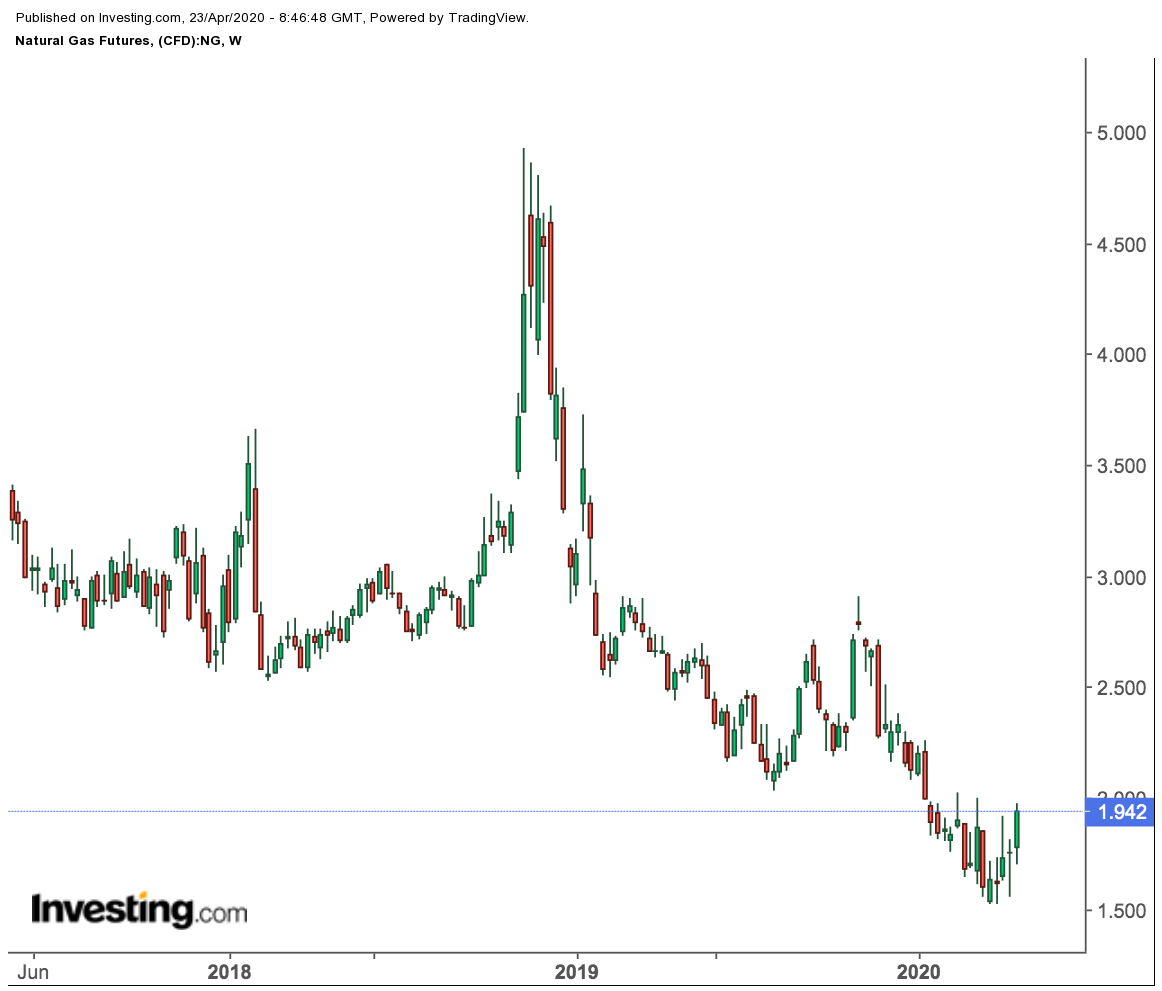 While gas was already on the upswing since last Thursday on bets that colder weather would boost heating demand, the gains accelerated as crude flew into negative territory on Monday.

After a bout of profit-taking Tuesday, Henry Hub futures were back up in Wednesday’s session after Oklahoma, the fourth largest U.S. oil producing state, allowed its oil drillers to shut wells without losing their leases.

“Many recent estimates have been coming out that estimate dry gas production will fall between 5-8 bilion cubic feet per day by the end of this year, with much of this decrease coming from reduced crude drilling and associated gas,” said Dan Myers, analyst at Houston-based gas-risk consultancy Gelber & Associates.

That optimism converges with the somewhat bullish expectations for natural gas supply-demand in weekly data due from the U.S. Energy Information Administration at 10:30 AM ET (14:30 GMT) today.

The consensus among industry analysts tracked by Investing.com is that utilities injected 39 billion cubic feet of gas into last week, compared with 92 bcf during the same week a year ago and the five-year (2015-2019) average injection of 49 bcf.

The smaller storage build was likely due to higher use of heating by Americans locked at home last week as the weather outside turned colder.

Data gathered by Investing.com showed last week’s weather to be slightly colder than usual with 105 heating degree days (HDDs) compared with a 30-year average of 74 HDDs for the period. HDDs measure the number of degrees a day’s average temperature is below 65 degrees Fahrenheit (18 degrees Celsius) and are used to estimate demand to heat homes and businesses.

And while the Oklahoma shut-ins were only approved Wednesday, gas production was also anticipated to have fallen last week from rigs pulled off the field earlier by oil drillers.

“In a normal week of late winter, the level of heating degree days last week could have been expected to yield a marginal storage withdrawal,” Myers said.

“However, COVID-19 demand destruction continues to leave a considerable amount of excess gas in the market and contribute to uncertainty around storage forecasts.”

In subsequent weeks, Myers said injections might accelerate quickly back in line with average levels, “although the relatively amplified spring weather pattern will restrain injections below last year for now.”

On the weather front, above normal temperatures should occur across the Western and the Southern United States in the next 11-15 day period, said Dominick Chirichella, director of risk and trading at the Energy Management institute. He added:

“The warmest readings should remain in the Southwest, but anomalies will decrease a bit. The Northwest will see cooling toward more seasonable levels as the period progresses. Below normal temperatures should occur from the Upper Midwest through the Northeast with the coolest areas located in New England.”

Bets of seasonally heavier consumption of gas during the summer for cooling later this year and January 2021 for winter heating have resulted in a disproportionate price spike on the Henry Hub for gas slated for delivery beyond the front-month May contract.

Cheaper prompt delivery versus forward is a dynamic known in commodities as contango. On the Henry Hub, June, the earliest summer month, settled on Wednesday at $2.05 per mmBtu. But September, the final month for summer, was at $2.35. January, the peak month for the 2020/21 winter, settled at $3.09.

To be sure, the front-month May contract on Henry Hub is still down 11% for the year. But this week’s gains in gas have left the contract up 18% for April, as the month nears its close.