Foreign investment in Canadian securities reached $12.7 billion in July, up from $10.3 billion in June. Overall, foreign investors acquired Canadian bonds and, to a lesser extent, equities, but reduced their exposure to money market instruments.

Non-resident acquisitions of Canadian bonds totalled $11.1 billion in July. Foreign investors acquired $5.2 billion of federal government bonds. This was the first monthly investment this year. From January to June, foreign divestment in federal government bonds totalled $33.9 billion. Non-resident investors also added $3.8 billion of private corporate bonds to their holdings in July, the lowest level since January. Canadian long-term interest rates were up by 22 basis points in July. The Bank of Canada raised its benchmark overnight interest rate by 25 basis points to 1.5% in July, the second increase so far this year. In general, interest rates and bond prices move in opposite directions.

Foreign investors reduced their holdings of Canadian money market instruments by $379 million in July, the fourth consecutive month of divestment. Lower foreign holdings of federal government and federal government enterprise paper was moderated by investment in private corporate paper. Canadian short-term interest rates were up by 15 basis points and the Canadian dollar appreciated slightly against its U.S. counterpart in the month.

Foreign investment in Canadian equities increased to $2.0 billion in July from $1.4 billion the previous month. The investment activity was concentrated in listed shares in the month. Canadian stock prices edged up in July. 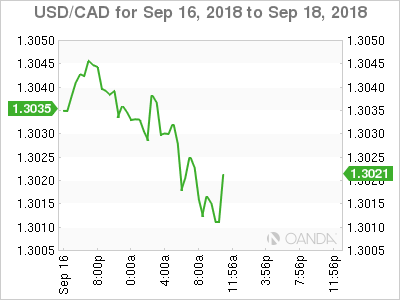 Canadian investment in foreign securities totalled $13.1 billion in July, following an $11.2-billion investment in June. Purchases of debt instruments were moderated by sales of equities in the month, an investment pattern generally observed since March.

Canadian investment in foreign debt securities reached a record $13.9 billion in July. Acquisitions of non-U.S. foreign bonds and U.S. Treasury bonds were the main contributors. Canadian investors acquired $44.9 billion of foreign bonds from January to July, with nearly 90% in instruments denominated in foreign currencies. These acquisitions mainly targeted bonds issued by foreign governments. The level of investment in 2018 has already surpassed the record investment for one year set in 2006 ($43.8 billion). In 2006, acquisitions were mainly in foreign bonds denominated in Canadian dollars, also referred to as maple bonds, as foreign corporations were active raising funds in the Canadian credit market prior to the global financial crisis. U.S. short-term interest rates were up by five basis points, while U.S. long-term rates declined slightly in July.