Global equities are closing out the week on the back foot, stressed mostly by technology stocks coming under earnings-related pressure. U.S. Treasury yields are holding above the psychological 2.90% as German Bunds steadied and U.K. gilts pared yesterday’s losses.

In FX the ‘big’ dollar has managed to extend this week’s advance, while in commodities, prices have eased a tad, as the rally in metals has stumbled.

Bank of England’s (BoE) Governor Mark Carney comments on Thursday managed to send the sterling to a two-week low of £1.4045. He said that “due to softer economic data, the BoE may consider not raising interest rates in May, as most were expecting.”

Note: Both U.K. inflation and retail sales data this week were both lower than in the previous periods and below market expectations. The odds for a May hike have dropped to 50%, earlier this week futures traders were looking at 80% possibility.

In Japan, the share average edged lower overnight as worries about slower smartphone demand hit technology shares, while financial stocks found support on the back of higher U.S. yields. The Nikkei gave up 0.1% – the index has rallied 1.8% for the week, its fourth consecutive week of gains. The broader rallied 0.1%.

Down-under, shares snap five sessions of gains, as the recent commodity prices rally paused for breath. The fell 0.1%, but managed to close out the week higher for the consecutive time. In South Korea, the fell 0.3%.

In Hong Kong, stocks end lower on a slump in energy shares prices from their two-month high print Thursday. The ended down 0.9%, while the closed 1.5% lower.

In China, stocks post their worst week in a month on trade war concerns. The blue-chip index closed down 1.3%, while the dropped 1.5%.

In Europe, regional indices are trading mixed – materials and energy stocks are under pressure following retracement in commodities and oil. In the U.K., Brexit negotiation concerns are weighing on sentiment. 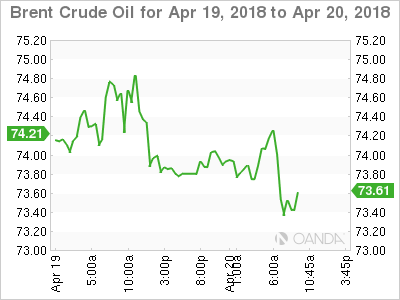 2. Oil dips, but trades atop of its four year highs, gold higher

Note: Both Brent and WTI hit their highest levels since November 2014 on Thursday, at $74.75 and $69.56 per barrel, respectively. WTI is set for its second weekly gain, climbing more than 1% this week, while Brent is also poised to rise for a second week, adding around 1.5%.

Beyond OPEC and company’s supply management, crude prices have also been supported by market expectations that the U.S. will re-introduce sanctions on OPEC-member Iran.

Gold prices have inched a tad lower ahead of the U.S. open and are headed for the first weekly decline in three-weeks on expectations of higher U.S. rates and easing political tensions on the Korean Peninsula and Syria weighing on demand for the safe-haven metal. is down 0.1% at $1,344.10 an ounce, while U.S. have fallen 0.2% to $1,346.30 per ounce. Spot gold is on the cusp of falling 0.2% on the week. 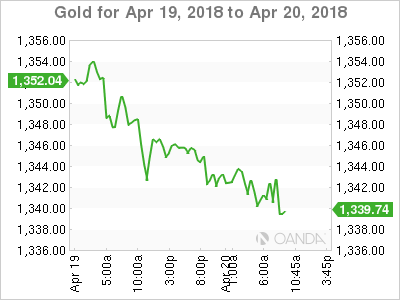 3. Sovereign yields back up

With the inflationary implications of commodity prices gaining strongly this week, and geopolitical risks fading, has supported global sovereign bond yields to back up.

Stateside, the has suddenly spiked above 2.90% and to levels not seen since the FOMC rate hike in March.

The speed of this week’s rise has allowed the U.S yield curve to steepen slightly. The 2’s/10’s spread has pushed out from +43 bps earlier this week up to +47bps, and this in turn has helped the dollar find a bid. 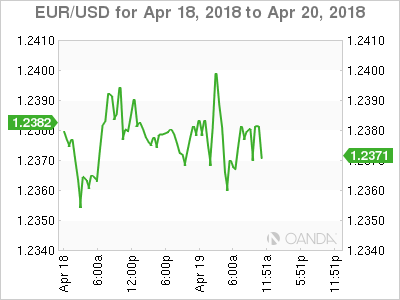 However, for now, it has failed to stay, last trading down 0.1% at €1.1974. Expect the market to remain cautious following the pair’s rapid appreciation.

(£1.4066) has continued its soft tone in the aftermath of Governor Carney’s comments yesterday that seems to doubt on a BoE rate hike next month. He emphasized yesterday that markets should “not get overly focused on the exact timing of hikes but attuned to the general path of rates.”

With the mild inflation data throughout Europe in recent weeks could get ECB’s Mario Draghi to verbally push back on EUR strength. ECB rhetoric of late has been all about ‘patience’ and dealers and investors seem to believe that any change in guidance would come in June rather at next week’s ECB meeting (April 26). 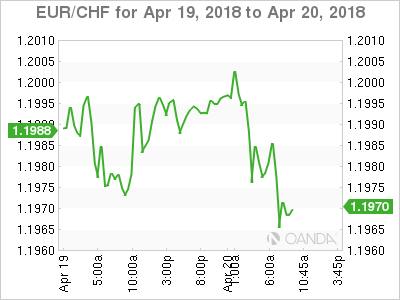 German data this morning showed that in March the index of producer prices for industrial products rose by 1.9% y/y.

In February the annual rate of change all over had been 1.8%.

Digging deeper, the March price indices of all main industrial groups increased compared with the previous year – energy prices were up 2.4%, while prices of electricity increased by 5.5%, whereas prices of petroleum products were up 1.3% and prices of (distribution) rose by 0.2%. 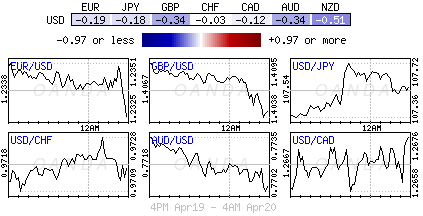