Global equities and U.S. futures are trying to close out the week on firmer footing. Equity direction continues to depend on investors weighing up corporate earnings reports and concerns about the global economy.

Market fears of slumping global growth has been taking the shine off a better-than-expected U.S. corporate earnings season. Are the world’s two largest economies making progress? Yesterday, U.S. Commerce Secretary Ross said that the U.S. is “miles and miles” from a trade deal, but there is a fair chance a deal will get done.

Heading into the North American session, the ‘big’ dollar trades under pressure against most G10 currency pairs, while U.S. treasury yields back up along with some Euro sovereign bonds. Sterling hit a new 20-month high overnight on rumored reports that Northern Ireland’s DUP would be backing Prime Minister Theresa May’s Brexit Plan B next week.

Note: Brexit – May is expected to table her Plan B to Parliament on Jan 29. As per the last go around, MP’s will then table amendments and the speaker will choose which will be voted on.

In commodities, prices rally as a “deepening crisis” in Venezuela threatens to make OPEC+’s job of balancing global oil supplies a tad bit more difficult. Even a surprise in U.S. inventories has been unable to keep the ‘black stuff’ down.

Yesterday, the European Central Bank (ECB) did what was expected, left rates on hold, while turning a tad more ‘dovish’ than in December. Basically, there is no sign of any fundamental change in their monetary policy stance – other tools remain at the disposal of the central bank to help return to higher levels of core inflation.

Capital markets will now have to wait for March when there should be more clarity on issues with regard to the risks stemming from Brexit, the U.S government shutdown and the Sino-U.S trade dispute.

On tap: There are no major economic calendar releases on the weekend. Down-under, it’s a bank holiday in Australia (Jan 27/28).

In Japan, the rallied overnight as chip-related firms extended gains, mirroring gains from their U.S. counterparts, while investors looked to major events next week for direction (Sino-U.S trade talks and NFP). The Nikkei share average rose 1.0% at the close, while the broader gained 0.9%.

Down-under, stocks rallied overnight, capping their third consecutive week of gains, as higher commodity prices supported energy and mining stocks. The closed up 0.7%, advancing 0.4% for the week. In South Korea, chip makers helped lifted the Kospi 1.5%, its biggest daily gain in nearly two weeks. For the week, the benchmark index gained 2.5%, while it jumped 6.7% on the month.

In China, stocks rallied, helped by strength in banking stocks, after regulators unveiled measures to help lenders replenish capital. However, ongoing worries over Sino-U.S. trade talks continue to cap gains. At the close, the blue-chip index rose 0.8%, while the gained 0.4%.

In Europe, regional bourses trade higher across the board following on from a stronger session in Asia and higher futures in the U.S. 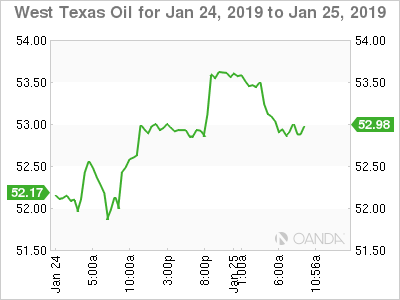 Ahead of the U.S. open, global oil prices remain bid as turmoil in Venezuela has generated concerns that its crude exports could soon be disrupted.

Despite plummeting supplies in recent years, the market has been pricing in the risk to Venezuela’s crude production – approx. 1 million bpd. However, global markets remain well supplied (U.S. production has increased by 2 million bpd in 2018) and should cap price rallies in the short term.

Global demand may begin to wane even further as a global economic slowdown is likely to dent fuel consumption.

Gold prices are closing out the week better bid on concerns about a prolonged U.S. government shutdown and as markets wait on Sino-U.S. trade talks due next week. has rallied 0.3% to $1,284.31 per ounce since Thursday’s close, while U.S. have climbed 0.2% to $1,283.10 per ounce. 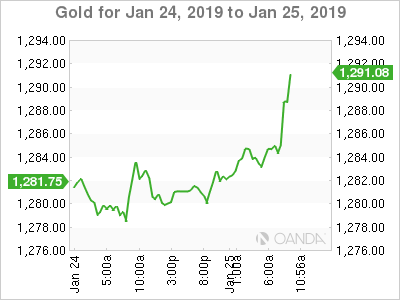 Core-eurozone bond yields are struggling to find traction, a day after falling sharply due to downbeat comments from the ECB who acknowledged weaker economic growth at yesterday’s monetary policy meeting.

Core bond yields fell to two-week low after the ECB’s news conference at which ECB head Mario Draghi acknowledged key economic risks, ranging from trade wars to Brexit. His ‘dovish’ comments have pushed back further along the curve market expectations of when the ECB will next hike rates.

Note: The ECB expects key interest rates to remain at their present levels at least through the summer of 2019, while markets have already pushed out the first hike expectations to June 2020. 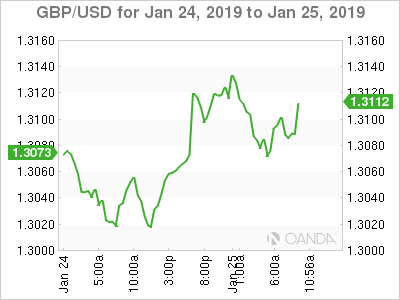 4. Dollar sees red across the board

The EUR (€1.334) continues to hover within striking distance of its three-year low, but trades above the psychological €1.13 level after the ECB revised their language on economic risks at yesterday’s monetary policy announcement. Many believe, despite the change in ECB’s copy, the regional impact does not have any immediate impact on the ECB’s monetary policy stance, but the change in sentiment on risks infers ECB rate hike delay to its current guidance of the first potential hike after summer 2019. Today’s German IFO data (see below) should reinforce this view.

(£1.3076) is again looking to approach the £1.31 area for its 20-month high, supported by rumored reports overnight that Northern Ireland’s DUP party would back PM May’s Brexit withdrawal deal in parliament next week when she ‘toughened it up’ (looking to implement a ‘time limit’ on the Irish border).

Some risk appetite sentiment helped the (¥109.82) pair edge closer to the psychological ¥110 handle. 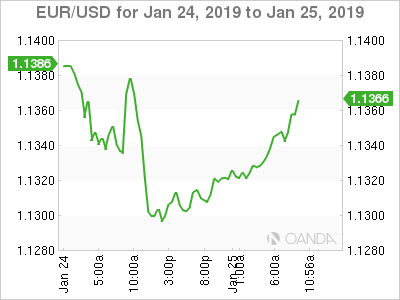 The Ifo Institute said that its business-climate index fell to 99.1 points in January from 101.0 points in December. Market expectations were looking for a 100.6 forecast print. Today’s headline marks the lowest level since February 2016.

“The German economy is experiencing a downturn,” Ifo President Clemens Fuest said. In manufacturing, the business climate deteriorated in all of the key business sectors apart from chemicals, the Ifo said.

Note: A survey of purchasing managers by IHS Markit yesterday showed that German manufacturing activity contracted at the start of the year, while services activity picked up in January.

Weaker German data this week is firm evidence that the eurozone’s strongest economy is stalling. 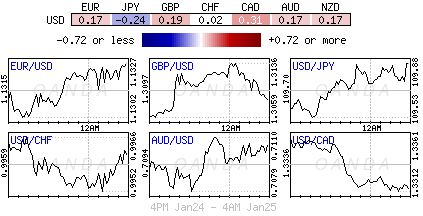