The surprising headline print would suggest that there maybe some upside risk to this morning’s non-farm payroll (NFP) headline print. Market expectations are looking for a print of 180K.

Yesterdays ADP reading was driven mainly by the service sector, while employment growth in the goods-producing sector also picked up, although that was mostly driven by construction.

With the market pricing out any Fed hikes for this year, will a strong NFP print this morning see dealers reversing their decision that the Fed is ready to abandon its rate hike plans when employment growth is still so strong?

As per usual, the market will be focusing on the U.S. wage component. Average hourly earnings are expected to rise 0.3% in December after gaining 0.2% in November.

The unemployment rate is forecast to remain steady atop of their 49-year low of +3.7% for a fourth consecutive month.

Also on tap this morning is the Canadian employment report. November data blew away market expectations by ten fold (+94K vs. +8K). Will we see a strong revision in a few hours? Market is looking for a headline print of 7K and the unemployment rate to tick a tenth higher to +5.7%.

On tap: Fed Chair Jerome Powell is being interviewed (10:15 am EDT) along with predecessors Janet Yellen and Ben Bernanke at the annual meeting of the American Economic Association this morning.

In Japan, stocks retreated overnight, its first trading session of 2019, as Apple (NASDAQ:) earnings warning hit tech stocks and signs of slowdowns in the U.S. and Chinese economies soured broader sentiment. The share average ended the day down 2.26%. However, a bounce by Chinese stocks helped the Nikkei to cut some of its intraday losses. The broader shed -1.53%.

In China, stocks bounced back from its four-year low on Friday, closing the week higher, as the government said it would cut banks’ reserve requirement ratios (RRR) and as optimism about trade talks with the U.S. helped ease some investor concerns. The blue-chip rose 2.4%, while the closed up 2.0%.

In Hong Kong, stocks also rallied on Beijing support rhetoric. The ended up 2.2%, while the China Enterprises Index gained 2%.

In Europe, regional bourses are rebounding this morning, with the majority of the Indices up over 1% on trade optimism as China Commerce Ministry (MOFCOM) confirms China and U.S. to hold vice ministerial level trade talks early next week. 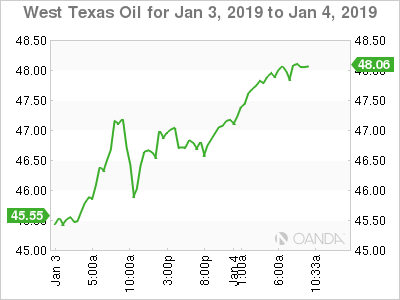 Oil prices have rallied ahead of the U.S. open after China confirmed that they would hold talks with the U.S early next week to look for solutions to a trade dispute, while signs of lower crude supply also supporting prices.

China’s commerce ministry said it would hold vice-ministerial trade talks with its U.S. counterparts in Beijing on Jan. 7-8.

From an inventory perspective, oil has garnered further support from the latest supply report from the API industry group, which indicated yesterday that U.S. crude stocks fell by 4.5 million barrels last week.

Despite the demand-side concerns, oil has received some support as supply cuts announced by OPEC begin.

Gold has erased most of its early shine after touching a six-month high overnight, as global equities regain some strength after Beijing announced a new round of trade talks with the U.S. amid fears of a global economic slowdown. is up 0.1% at $1,294.90 per ounce, after touching $1,298.42 earlier. U.S. are also up about 0.1% at $1,296.50 per ounce. 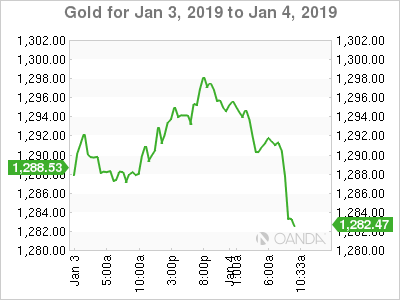 Earlier this morning China cut its required reserve ratio (RRR). It will be cut by 50bp on Jan. 15 and a further 50bp on Jan. 25. The cut is partly about managing liquidity ahead of Chinese New Year (Feb. 5). But it should also provide support for the economy.

The People’s Bank of China (PBoC) indicated that the move has multiple objectives – about 50% of the +¥1.5B will offset the contractionary effect of injections under the Medium Term Lending Facility that expire soon, while a percentage is also intended to “reduce financing costs.” 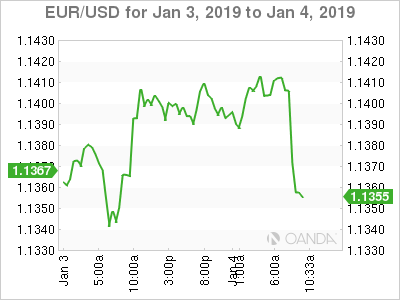 Investor optimism overnight has dealers unwinding some of their safe-haven trade strategies that have been accumulating this week. Also aiding this trade is China cutting its RRR to alleviate some liquidity concerns ahead of its Feb. 5 Lunar New Year holiday.

JPY (¥107.48) is weaker outright as Japanese markets returned from their extended holiday. The briefly tested below ¥105 level on Thursday for a nine-month low dollar print, but has climbed above the ¥108 handle in the overnight session.

(€1.1404) is holding above some key support levels (€1.1375 & €1.1350 in the Euro session, but gain may be capped as PMI services data this morning was generally disappointing, as too was December inflation readings. 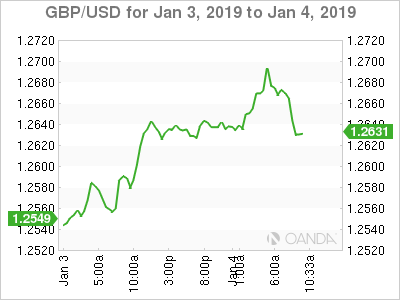 5. Euro CPI not a concern for ECB

Euro data released earlier this morning provides further evidence that economic growth in the EU has eased and, with underlying inflation still low, it would suggest that the ECB can afford to wait much longer before hiking interest rates than the current guidance implies.

But core inflation is still showing no sign of rising. It was unchanged at just +1.0% in December, in line with its average over the past few years.

Note: Some analyst expect the recent pick-up in wage growth could push the core rate up a tad later this year, as energy inflation looks set to keep falling, if so, could push headline inflation lower to about 1% in early H2. 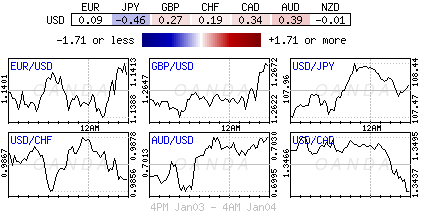