Global equities had a mixed session overnight while U.S. futures edged lower this morning in a week that market ‘bulls’ have been able to run rampant aided by the support of G7 central banks change in monetary policy rhetoric back to stimulus mode. U.S. Treasuries have ticked a tad higher while the U.S. dollar atop of recent range lows.

In commodities, the safe haven gold managed to trade above $1,400 an ounce for the first time in six years, while oil prices have eased from this week’s highs on renewed U.S.-Iran tensions.

However, geopolitical risk remains front and center, after reports that President Donald Trump had approved strikes against Iran in retaliation for downing a U.S. drone, but then called off the operation.

In the U.K., the Conservative Party leadership voting results for the fifth round saw Michael Gove eliminated. Boris Johnson is to face Jeremy Hunt in final party-wide vote next month.

In Japan, the fell overnight as investors awaited cues from Sino-U.S. trade talks, while oil and mining shares were in demand amid rising geopolitical risks in the Middle East. Index fell 1% but rose 0.7% for the week on ‘easy’ G7 monetary policy talk.

Down-under, stocks closed lower but still posted weekly gains on hopes of further interest rate cuts by the Reserve Bank of Australia (RBA). The to fell 0.6% at the close. The benchmark added 1.5% for the week. In South Korea, the index fell 0.27% overnight, but gained 1.44% for the week.

In China, stocks ended firmer as Beijing and Washington prepared for fresh trade talks and regulators promised start-ups easier access to funding. At the close, the index was up 0.5%. The index gained 4.2% this week. The blue-chip index added 0.1% and total gains of 4.9% for the week. In Hong Kong, the fell 0.4%. 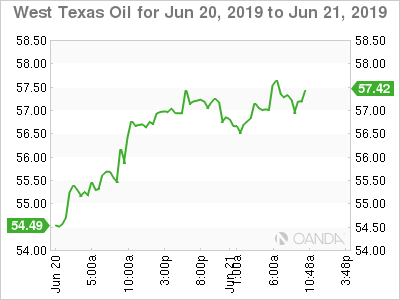 Oil prices are lower, but benchmark is set for its first weekly gain in five weeks amid rising tensions in the Middle East and on hopes for a drop in U.S. interest rates that may stimulate global growth.

Providing support for ‘black gold’ is the uptick in tensions in the Middle East after tanker attacks there last week. Washington blames Iran, but Tehran denies any involvement. Media reports say Trump had approved strikes against Iran in retaliation for downing a U.S. drone yesterday, but then called off the operation.

The market is also waiting for the OPEC+ meeting where members will decide whether to extend a supply reduction pact that ends this month. Earlier this week, OPEC agreed to move its next meeting to July 1, followed by a meeting with non-OPEC allies on July 2, while the joint technical committee will meet June 30. 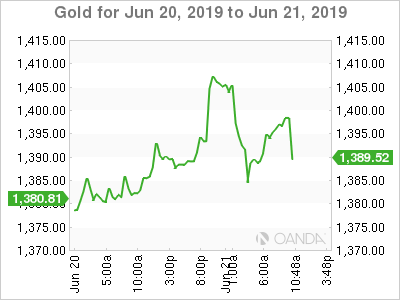 Euro regional government bond yields have backed up a tad this morning after news that business activity in the bloc had picked up this month, but the data was not strong enough to shift market expectations that an ECB rate cut is likely soon.

Across the single-currency bloc, 10-year eurozone bond yields are 2-3 bps higher in this morning’s session.

Note: Money markets are “fully” pricing in a 10 bps rate cut at the ECB’s September meeting. 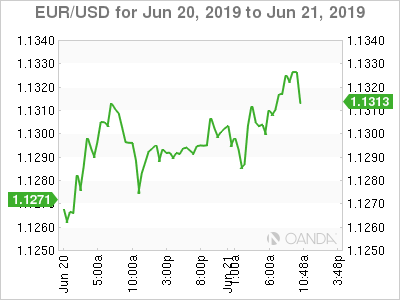 The U.S. futures continue to find some traction on tensions between Iran and the U.S. after Trump called for (then retracted) targeted strikes in Iran in retaliation against the downing of U.S. drone this week.

The EUR (€1.1298) has pared gains slightly after the flash purchasing managers’ index on eurozone manufacturing activity came in at 47.8. Pullbacks, for now, are limited as eurozone services PMI was better than expected at 53.4, versus forecasts of 52.8. German manufacturing PMI earlier also beat forecasts, albeit remaining at a very weak 45.4.

GBP (£1.2663) traded higher yesterday but has since given up some ground as dealers focus on the Tory leadership race for the PM position. The final two are as expected Boris Johnson and Jeremy Hunt. They both look to take the U.K. out of the EU by the end of October. The recent strength however is more than likely down to USD weakness.

Data this morning showed that the pace of eurozone economic growth remained subdued this month but has edged up for a second successive month to reach a seven-month high.

Growth was driven by the service sector, which helped offset an ongoing manufacturing downturn. However, optimism about the future meanwhile has dipped lower.

The IHS Markit Eurozone Composite rose to 52.1 in June. This morning’s reading puts growth in Q2 up slightly q/q, despite recording the second-lowest since Q4, 2014.

Growth was driven by the service sector, while in contrast, manufacturing remained in decline, with output falling for a fifth consecutive month. 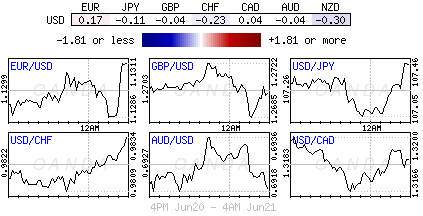