Global equities saw red overnight, as tech stocks continued their retreat in the Asian session, while in Europe, stocks has been hampered by disappointing industrial production data from Germany.

The G6+1 meeting is expected to be an intense affair amidst heightened trade tensions between the U.S. and some of its closest allies.

Naturally, the market is looking for further clues on trade after the Trump administration’s decision last week to impose tariffs on steel and aluminum imports from fellow G7 countries. With U.S. President Donald Trump already announcing that he is leaving early on Saturday don’t expect much to be achieved.

U.S. Treasuries are steady after 10-year yields tumbled as much as 9 bps yesterday, and the U.S. dollar has edged higher.

On Tap: Canadian employment numbers are expected at 08:30 a.m. EDT.

In Japan, the share average snapped a four-day winning streak overnight as investors stayed on the sidelines ahead of major economic events, while large-cap stocks weighed on the index. The Nikkei ended 0.6% lower, but is still up 2.4% for the week, its biggest gain in nearly three months. The broader fell 0.4%.

Down-under, shares ended lower in light trading as investors kept to the sidelines ahead of key central bank meetings next week with losses in industrial and material stocks outweighing gains in consumer and energy stocks. The was down 0.2%. It advanced nearly 1% this week, in its first weekly gain in four. In South Korea, the was down -0.7%.

In China and Hong Kong stocks fell overnight, as investors were worried about the impact from the listings of big-caps, and amid uncertainty over trade relations. The index was down 1.3%, while the also lost -.3%. In Hong Kong, the dropped 1.2%, while the Hong Kong lost 1.3%.

In Europe, regional bourses trade lower as the risk-off trade intensifies, and is tracking U.S. index futures lower. The tech sector in particular has been one of the hardest hit on rumours that Apple (NASDAQ:) has warned on a 20% decline in new iPhone parts orders. 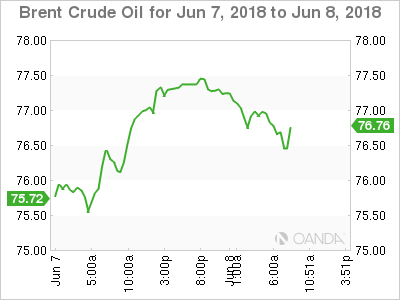 Oil prices are under pressure as signs of weakening demand in China and surging U.S. output weighs on markets despite support from supply woes in Venezuela and OPEC’s production cuts.

Customs data this morning showed that China’s May imports eased away from a record high hit the previous month, with state-run refineries entering planned maintenance.

Further weighing on prices has been surging U.S output. According to this week’s EIA report, it hit another record last week at 10.8m bpd.

Ahead of the U.S. open, gold prices have eased as the dollar has inched up, while investors’ remain cautious ahead of today’s G7 meeting and other key events next week such as a U.S. Federal Reserve policy meeting and a U.S.-North Korea summit (June 12). 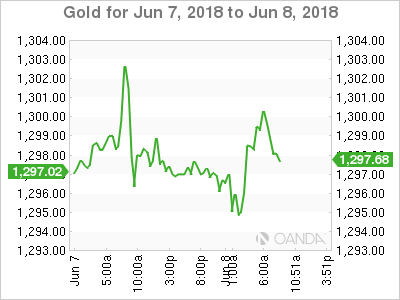 In Europe, the cost of insuring exposure to Italy’s sovereign debt has jumped this morning due to broad-based global risk aversion and unease about Rome’s spending plans, prompting a sell off in Italy’s government bonds.

Italian two-year BTP yields have rallied 20 bps to 1.775% percent, while a rise in 10-year BTP yields pushed the gap over benchmark German Bund yields to around 265 bps – the widest in around two-weeks. Under risk aversion, Germany’s 10-year Bund yield has fallen 5 bps to 0.43%. 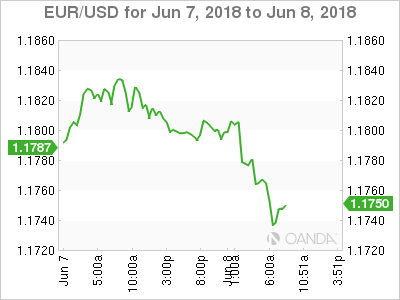 There are no surprises that risk-aversion dominates proceedings ahead of today’s G6+1 summit on concerns that the U.S. trade row could deepen.

(€1.1770) is again trading below the psychological €1.18 level as Italian yields continued to edge higher and widen the spread to Bunds.

(£1.3412) is again being dominated by Brexit proceedings. The market does not seem to like the recent proposal on the ‘backstop’ from the U.K.

Note: The U.K. would not leave the customs union until permanent arrangements could be put in place, possibly involving new technologies that avoid the emergence of a visible border between Northern Ireland and the Republic. 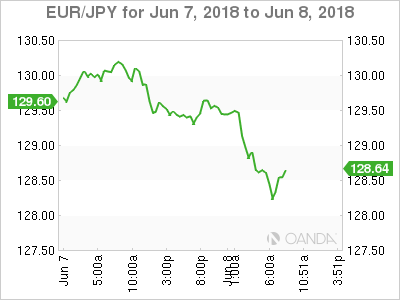 Early morning data showed that German industrial production and exports declined in April compared with March. Again, this would suggest that Europe’s largest economy is struggling to gain momentum following a weak Q1.

According to the Federal Stats office, German industrial output dropped 1.0% from March while exports slipped 0.3%. Market consensus had expected a small increase in industrial production.

Data published Thursday showed that German manufacturing orders dropped for the fourth consecutive month in April, which suggest that the slowdown has indeed entered Q2. 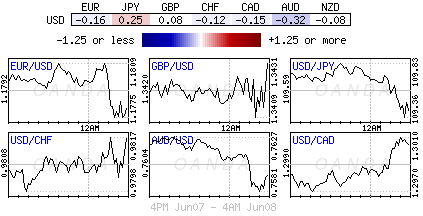