Friday, May 25: Five Things Markets Are Talking About

U.S. President Donald Trump’s decision to cancel his summit with North Korea’s Kim Jong-Un yesterday, mentioning Pyongyang’s anger, is expected to keep geopolitics the primary concern for investors and dealers throughout the long weekend in the U.S.

It’s not a surprise that yesterday’s White House move has provoked a knee-jerk reaction from the various asset classes, including in haven assets such as gold, JPY and CHF.

Stocks are mixed, while U.S. Treasuries and other sovereign bonds have edged higher along with the U.S. dollar as investors navigate a number of political developments from Asia, Middle East and Europe. has extended its losses.

In Europe, Spain’s biggest opposition party is pushing for a no-confidence motion against PM Mariano Rajoy, while in Italy, the markets are concerned that the incoming government could sully Italy’s relations with E.U.

In the U.K., Prime Minister Theresa May continues to feel the heat as the E.U. has dismissed many of the U.K.’s plans for their post-Brexit relationship.

On tap: This morning, E.U. finance ministers will discuss the latest on Brexit talks, in Brussels, while stateside, orders are released.

Markets have recovered some risk appetite after North Korea offered a “measured response” to the U.S. decision.

In Japan, the edged up overnight, supported by large cap stocks, but gains were limited after Trump cancelled the June 12 summit. Defence-related stocks attracted buying on speculation that geopolitical tensions would rise. The Nikkei share average closed up 0.1%. For the week, the index lost 2.1%, its first weekly decline in nearly three months. The broader dropped 0.2%.

Down-under, shares edged lower overnight, as declines in materials and energy stocks on lower commodities and oil prices outweighed gains in consumer staples. The slipped 0.1% at the close of trade. The benchmark fell 0.9% for the week, its biggest decline since March. In South Korea, the pared much of its earlier loss of 0.9% to trade down 0.2%.

In China and Hong Kong stocks edged lower, as sentiment soured after Trump called off next month’s planned Singapore summit. The index rose 0.1%, while the slipped 0.1%. 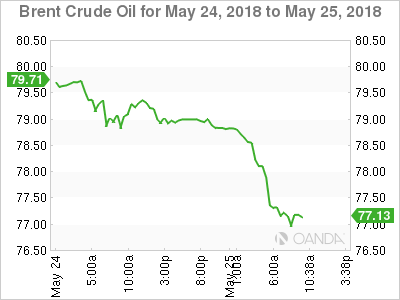 Market chatter is suggesting that the energy ministers of Saudi Arabia, Russia and the U.A.E. are discussing an output increase of about 1m bpd.

Global crude supplies have tightened sharply over the past year because of the OPEC-led cuts, which were boosted by a dramatic drop in Venezuelan production.

Note: Russia and OPEC’s voluntary output cuts have opened the door to other producers to ramp up production and gain market share.

Ahead of the U.S. open, gold prices have eased a tad on profit taking, after breaking above $1,300 in yesterday’s session on geopolitical worries. is down 0.2% at +$1,301.65 per ounce, after climbing nearly 1% Thursday in its biggest one-day rally since early April. 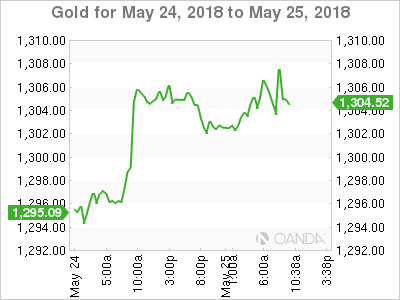 Sovereign bond yields have dropped to new monthly lows this week after the U.S.-North Korea summit was cancelled.

The White House announcement yesterday sparked a rush into safe haven assets including eurozone government bonds and the Japanese yen.

Note: German debt was already in demand after Wednesday’s weak Euro PMI’s and both the Italian and Spanish political risk scenario.

In the U.S., again have fallen below the psychological 3% (2.965%) after this week’s Fed minutes showed the central bank plans to stay on a “gradual” path of rate increases even if inflation meets its target. The minutes also showed U.S. officials are still unsure over the degree to which low unemployment will fuel faster wage increases or firmer price pressures. 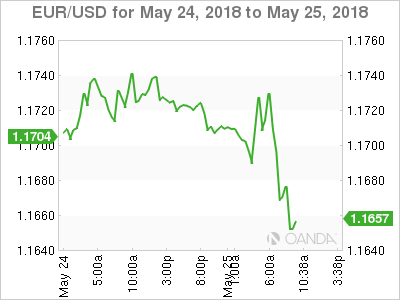 G7 currency ranges remain relatively contained ahead of the bell on Wall Street and the long weekend stateside and in the U.K.

has fallen 0.1% to €1.1706 as the dollar recovers some small gains after yesterday’s safe haven knee jerk. The safe-haven Japanese yen is retracing gains against the dollar as well, with up by 0.2% at ¥109.41.

GBP (£1.3361) continues to remain vulnerable to Brexit negotiations. This week saw the pound trade atop of its five-year low at £1.3304.

Turkey’s lira is heading for its biggest five-day decline since the global financial crisis despite this week’s emergency rate hike. TRY has given up a large chunk of the gains it made after the CBoT raised interest rates by 300 bps on Wednesday, falling 1.1% to $4.7202. The lira has fallen almost 15% so far this month.

ONS reported that capital expenditure by British businesses fell by 0.2% in Q1 and marked the sharpest slowdown since Q3 2015.

Digging deeper, the ONS said that weakening investment in non-residential buildings and structures such as schools, bridges and commercial buildings was among the key drivers of the Q1 slip.

Other data reported by the ONS showed that its GDP second estimate for Q1 remained unchanged at 0.1%, with an annualized figure of 0.4% – the weakest quarterly growth for the U.K. economy in more than five-years. 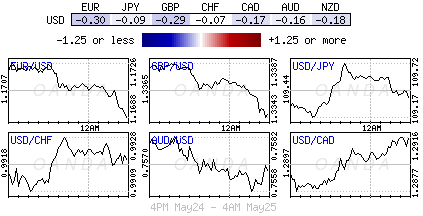