Friday, Oct. 12: Five things the markets are talking about

Volatility, in particular, for equities, has notched aggressively higher this week, now that sovereign bond yields are beginning to price out cheap money.

Stronger than expected U.S. economic data and weak European underlying inflation in key countries is being blamed as the specific trigger for this week’s ‘bearish’ bout.

However, Chinese trade data released earlier this morning showed better-than-expected growth in Chinese exports has, at least temporarily, helped ease investor concerns about the damage to China’s economy from U.S. tariffs and other trade friction.

China’s trade surplus with the U.S. widened to a record $34.1 billion in September as exports to the American market rose by 13% y/y, despite a worsening tariff war.

Global equities have staged a robust recovery; the ‘big’ dollar trades steady, U.S. Treasury yields back up and prices recover while still heading for the biggest weekly drop in three months.

Nevertheless, a gradual Fed rate increase remains the order of the day, especially after yesterday’s muted U.S. data – the market is pricing in a 25 bps move in December.

Since the Fed’s last meeting in September all data has been in line with the Fed’s depiction of an economy in which low unemployment will be coupled with inflation running near 2% for the foreseeable future.

1. Stocks sell off ends in Asia

Chinese stocks, among the biggest losers in a global market selloff this week, rallied overnight, as investors reassessed the impact of the Sino-U.S. trade spat on the country’s economy and its markets.

In Japan, the ended higher on Friday as investors took heart from gains in Chinese equities on upbeat export data, which generated buying in manufacturers exposed to China. The Nikkei share average gained 0.5%. On Thursday, the index slid 3.9% and for the week the index was down 4.6%, its biggest weekly drop since March. The broader traded flat.

Down-under, Australia’s lagged most of Asia Pacific overnight as the heavily weighted energy and financial sector held the index back. It ended 0.2% higher, but fell 4.7% for the week. In South Korea, its stock market rebounded from one of its biggest drops in seven-years. The rallied 1.5%, its first gain this month. The index fell 4.7% for the week.

In China, the main stock indexes bounced higher overnight after suffering massive losses this week, as investors went bargain hunting on the back of stronger Chinese exports data. At the close, the index was 0.9% higher, after touching near four-year lows yesterday. The index was down 7.6% for the week, its worst weekly performance in eight months. The blue-chip index closed 1.49% higher.

In Europe, regional indices trade higher across the board rebounding from multi-month lows following a rebound in U.S. index futures and Asian Indices. 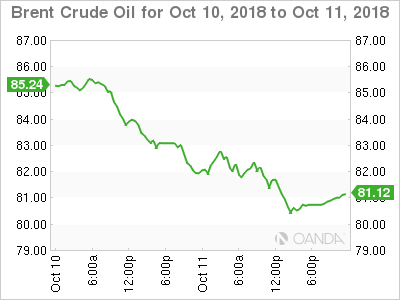 Oil has rallied overnight; rebounding after two days of heavy declines, though prices pared gains after an IEA report deemed supply adequate and the outlook for demand weakening.

Note: Brent is still on course for a 3.7% decline this week, the biggest weekly fall in about four months.

Oil found support from data showing that China’s daily crude imports last month hit their highest in four months and from a rebound in equities.

Gains were pared, after a monthly report by the IEA said the oil market looked “adequately supplied for now” after a big rise in production and trimmed its forecasts for world oil demand growth this year and next. “This is due to a weaker economic outlook, trade concerns, higher oil prices and a revision to Chinese data,” said the IEA.

Ahead of the open, gold prices are under pressure as global equities rally, but the ‘yellow’ metal trades within striking distance of its 10-week high print in yesterday’s session. is down 0.4% at $1,218.86 an ounce, after rallying 2.5% yesterday, as this week’s equity rout sent investors rushing to safe havens. U.S. are down 0.4% at $1,222.30 an ounce. 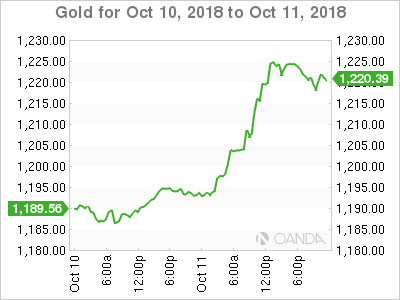 3. Yields back up on relief

Note: Bunds yields are down from five-month highs reached earlier this week at 0.58%. 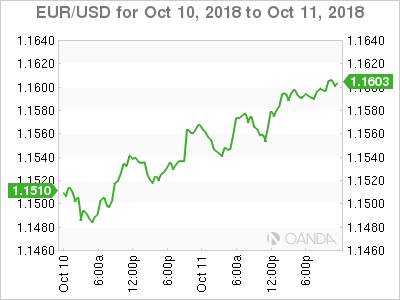 USD initially tested multi-week lows as a weak Wall Street soured its recent bullish sentiment. Nevertheless, the greenback is off its worst levels as the equity sell-off has eased.

After jumping to an 11-day high of €1.1611 overnight, the dollar has stabilized and trades slightly higher, last by 0.1% at €1.1593. However, expect Italian fiscal risks and the direction of U.S. yields to continue to drive the EUR/USD.

The PBoC set yuan at weakest level since March 2017, a day after U.S. Treasury staff advised Secretary Steven Mnuchin that China was not manipulating its the exchange rate. The midpoint for the dollar was ¥6.9120.

(£1.3215) is trading within striking distance of its three-week highs on hope for a Brexit agreement at the upcoming E.U. leader summit next week. There is speculation that Prime Minister Theresa May is close to an agreement, but obstacles remain, as she requires the DUP Party ally and rebel Tory members support. 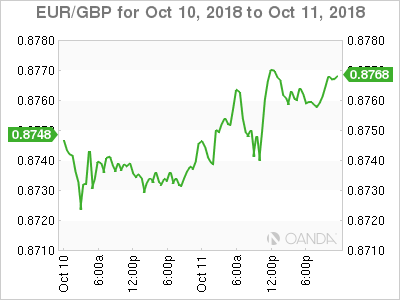 Data this morning showed that industrial production in the eurozone rebounded strongly in August, as surges in Italy and the Netherlands offset weakness in Germany to suggest economic growth across the currency bloc continues at a modest pace.

The E.U.’s statistics agency said industrial production was 1% higher in August than in July, and up 0.9% on year. The market was looking for a monthly gain of just 0.2%.

It was the first rise in production since May, following two straight months of decline.

Today’s healthy rebound will likely reassure the ECB that the economy is on course to grow more slowly this year than last, but still at a rate that will lead to new jobs being created, thereby pushing wages and inflation higher.

Note: The IMF trimmed its eurozone growth forecast for this year to 2% from 2.2%, noticeably downgrading its growth projection for Germany to 1.9% from 2.2%. 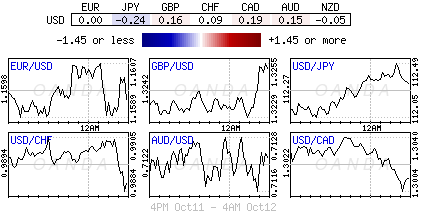