From Wildfires To New Provincial Government: Watch Developments In B.C.

Canadian investors should take note of the current developments occurring, and the ones that are about to happen in British Columbia.

Firstly, the state of emergency in the province of B.C. was declared on July 7th due to the wildfires. It is too early to come up with a precise economic impact of this natural disaster. So far, logging activity, tourism activity and the day-to-day life of many residents in BC’s interior have been disrupted. Secondly, the U.S. just imposed a new set of duties on Canadian softwood lumber (the U.S. represents about half of B.C. lumber exports).

In Victoria, British Columbia’s new NDP government took power earlier this week, officially ending the 16-year era of Liberals in command. B.C.’s new premier, John Horgan, will have support of the Green Party, who does not have representation in the new cabinet. Carole James, former NDP leader between 2003 and 2010, is the new finance minister. The Budget Transparency and Accountability Act (BTAA) stipulates that the NDP must release a budget with fiscal estimates “no later than 90 days after the post-election appointment of the Executive Council.” Thus, we expect a new 2017 budget to be unveiled between late September and mid-October, unless the BTAA is modified by the NDP government.

As it is the case after any political election, a new government could mark the beginning of a shift in the way public finances are managed. As the NDP government prepares its budget, it must consider that the pace of real GDP growth will be healthy, in the 2.0-2.5% range annually in the medium-term, but below the roughly 3% figure observed in 2014, 2015 and 2016. Combined with unexpected costs related to the wildfires (a $100M fund has been put in place), slower economic growth implies that the wiggle room to implement new fiscal measures may get thin without having to rely on more debt issuance.

The NDP’s electoral platform shows annual surpluses averaging about $100M for the next three years, below the $200M+ surpluses projected by the former Liberal government in the February budget. For instance, NDP’s electoral platform indicates about $700M in new spending for FY 2017-18, which is expected to be partially offset by a 1% increase to the general corporate income tax rate (from 11% to 12%) and income tax hikes for the top 2% of earners.

During the spring election campaign, the NDP also proposed a 2% speculative real estate tax applied to the value of the residential property. This tax is targeting those who purchase residential assets but don’t live in the province and leave their unit empty. Given the tightening in housing market conditions in Vancouver and elsewhere in the province, new Housing Minister Selina Robinson recently told the media her intention to improve housing affordability with the construction of 114,000 rental units over 10 years and the closing of loopholes to prevent flipping activity in the presale condo market. The 15% foreign tax put in place in August 2016 was a step in the right direction but remains clearly insufficient. Indeed, the share of foreigners involved in Vancouver’s resale market transactions fell substantially (to slightly less than 5% so far in 2017, compared with about 13% in June/July 2016). Still, home prices in Vancouver and Victoria recently reached a new record high (see chart below).

Another electoral promise to watch for in the coming budget, popular for many auto drivers but less friendly for bond investors, is the likely utilization of the $500M Prosperity Fund (similar to Quebec’s Generations Fund) to end car tolls on the Port Mann and Golden Ears bridges.

Bottom Line: The B.C. Liberal party has been correctly perceived by the public and investors as fiscally conservative for more than a decade. Notably, the province of B.C. has registered fiscal surpluses during the last four fiscal years (see chart below). This being said, the NDP government brings a refreshing perspective on fiscal policies. It will be important for them to assess the extent these new policies can be implemented, while preserving balanced budgets. Investors may have the answer to this when the 2017 budget is released this fall. Another possibility is that the NDP government will prefer to focus on the province’s opioid crisis, wildfires and the U.S.-Canada softwood trade dispute in its first budget (which could turn out to lean more toward a fiscal update). In this case, the NDP would introduce most of its electoral promises in the 2018 budget. 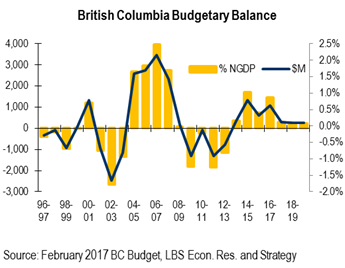 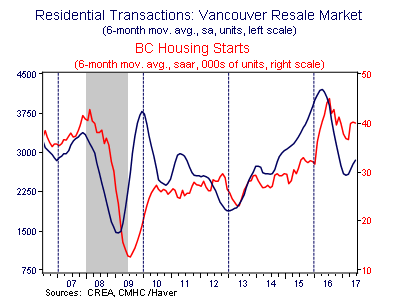 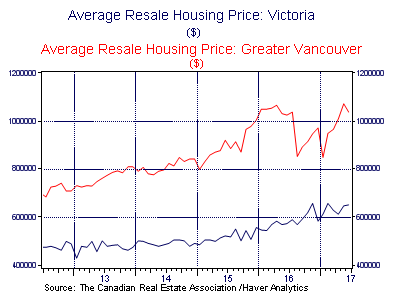