The persistent rally in equities reflects a general sense of optimism in the financial markets that is at odds with the anger and protests in major cities across the globe. broke above 108 at the start of the New York trading session and held onto its gains throughout the trading day. The same was true for other currencies that are sensitive to risk appetite, such as the Australian and New Zealand dollars. This price action suggests that investors believe the economic impact of the civil unrest will be limited and short-lived. Whether that’s true remains to be seen as ongoing violent protests like the ones in Hong Kong have crippled the local economy. The 1992 Rodney King riots cost Los Angeles almost $4 billion, according to some studies, with more than $1 billion in property damage. Coming at a time when economic activity is depressed by COVID-19, these protests could stall the path to recovery, which would translate into billions of dollars in lost revenue. It all depends on the response of the federal government and, unfortunately, confidence on that front is waning quickly. With that said, none of this seems to matter to investors who prefer to find comfort in reports that China may continue to buy U.S. soybeans and the liquidity spigot will stay on for the foreseeable future.
Risk appetite should be supported by tomorrow’s U.S. and reports. From a logistical perspective, the service sector was able to restart before manufacturing, and while ADP (NASDAQ:) is expected to report more job losses, the pace should ease. This could help the rally particularly against the euro ahead of the European Central Bank’s monetary policy meeting.
The hit a fresh three-month high after the Reserve Bank left interest rates unchanged last night. This rally should not surprise our readers who saw our data table illustrating the wide spread improvements in Australia and China’s economy since the last RBA meeting. While it emphasized the need for accommodative policy, said it was prepared to scale up bond purchases if necessary, indicated that rates will not increase until there is meaningful progress made towards full employment, investors found relief in its positive outlook and the lack of mention of Australia-China trade relations. The central bank said there’s been signs of pickup in consumer spending and stabilization in hours worked that fosters the belief that the downturn will be less than previously expected. When tonight’s first quarter GDP numbers are released, they are expected to show the first contraction since 2008. However, given the better than expected retail sales and trade numbers, the risk is to the upside for this release.
The Bank of Canada is up next with a announcement on Wednesday. Like the RBA, the BoC is not expected to increase stimulus. The meeting will be the last for Stephen Poloz, who will be succeeded by Tiff Macklem, so any future changes will be reserved for his successor. For what it’s worth, Poloz remains dovish and sees inflation reaching its target more slowly and the data deteriorated significantly between the last two policy meetings (as seen in the table below). Monthly fell sharply in April, with growth contracting 7.2%. However on a quarterly basis, the economy contracted only 8.2% against a 10% forecast. The last time the BoC met was in April, when it cut its GDP forecasts and unveiled new money market operations, describing the current downturn to be the sharpest on record. Canada’s labor market numbers could have a bigger impact on the than the BoC. More job losses are expected, but less than the previous month when job losses hit a record high.
The traded higher for the sixth consecutive trading day. We continue to look for profit-taking ahead the ECB’s monetary policy announcement. Nearly every major economists expect a the Pandemic Emergency Purchase Program to be increased by at least 500 billion euros with some calling for a 750-billion to 1-trillion increase. This is unlikely as the central bank will prefer to save some of the changes for future months. German labor market numbers will be released on Wednesday along with revisions to the Eurozone’s composite PMI indices and the Eurozone’s unemployment rate. More jobless claims are expected, but fewer than the previous month. also pressed higher and, while this a quiet week for UK, traders should keep an eye out for tomorrow’s PMI revisions. 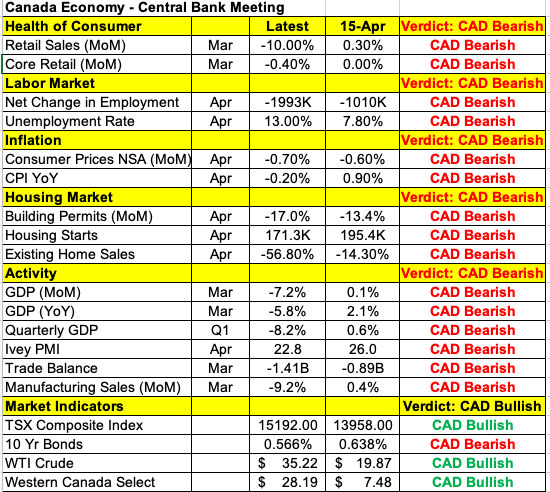