FX: Sell In May And Go Away

April was a great month for the US dollar but the beginning of May has posed challenges.

End of April profit-taking drove the greenback lower initially, but the rally was renewed by optimistic comments from Federal Reserve Chairman Jerome Powell. Then on Friday, the US dollar turned lower despite good labour market numbers. This final move makes investors wonder if the greenback has peaked, paving the way for a bottom in the euro, AUD, and other major currencies.

On a fundamental basis, the US dollar should be a more attractive currency. The US economy is performing better and the Fed is more hawkish than other central banks, but technically, having fallen to multi-month lows, EUR and AUD are vulnerable to a further short squeeze that could take these and other currencies higher. But even if the AUD and NZD do squeeze higher, their moves will be restrained ahead of their Reserve Bank monetary policy announcements. Sterling was the best performing currency last week and it is an example of how important rate decision are. AUD and NZD trailed behind on concerns that rate cuts will be on the minds of those central banks.

May Is Typically A Good Month For The Dollar

We’ve all heard the saying Sell in May and go away. It’s a well-known investment strategy that calls for investors to buy stocks between November and April and switch to bonds between May and October. But this month is generally a good one for the , which strengthened 7 out of the last 10 years. The Dollar Index also tends to perform well in May, having appreciated 12 of the last 15 years (see chart below). 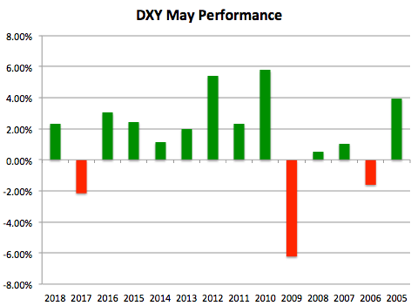 Fundamentally, the US dollar should be an attractive currency. Even though the greenback fell after Friday’s labour market report, job growth exceeded expectations and the unemployment rate fell to a 49-year low. Nonfarm payrolls increased by 263K in April, up from 189K the previous month, and the jobless rate dropped to 3.6%. The dollar fell because wage growth increased less than expected but last month’s release was revised higher, and year over year, earnings growth is just below the cyclical high. So, what this data tells us is that the labour market is tight, finding work is easy but salary gains are limited, and American pocketbooks aren’t swelling.

It’s important that Fed Chairman Powell is optimistic. At last week’s FOMC meeting, he said solid fundamentals are supporting the economy as it continues on a healthy path. He dismissed talk of easing, described the Fed’s policy stance as “appropriate right now,” and said “we don’t see a strong case for moving in either direction.” While the FOMC statement focused on the negatives like low inflation, weaker consumer spending and business investment, Powell downplayed all of these concerns. He acknowledged that inflation has been weaker but attributed the softness to transitory factors. He also said consumer spending and business investment will most likely pick up and noted that some of the risks they were worried about in March (such as Brexit, Europe and China) have “moderated.” These upbeat comments kicked off a dollar rally so strong that it drove EUR/USD below 1.12 and below 70 cents.

While that rally fizzled on NFPs, we believe the dollar remains a buy for two main reasons. First, the Fed chair made it very clear that when it comes to the economy, he sees the glass half full. He expects the outlook to improve as the prior weakness eases. Secondly, he sees no reason to be talking about rate cuts. This view contrasts sharply with other central banks, which have expressed growth concerns and talked openly about a response to counter the trend.

Economic and monetary policy divergences were the reasons for the dollar’s strong gains in April and they should continue to be a source of demand for the greenback. CPI and PPI are scheduled for release this week and with gas prices rising to their highest level since October, the risk is to the upside for these upcoming inflation reports.

Don’t forget that when it comes to trading currencies, sentiment and technicals are important as well. has not closed above the 20-day SMA since April 25th and EUR/USD found support above 1.11. We could see further profit taking on long dollar positions before the buyers come in again. The next support level for USD/JPY is 110.50 and resistance in EUR/USD is near 1.1270.

Will The Reserve Banks Help Or Hurt AUD And NZD?

The Australian and New Zealand dollars were the worst performing currencies last week as investors were reluctant to buy ahead of the Reserve Bank’s monetary policy announcements. The RBA and RBNZ are among the least hawkish major central banks. They are the furthest from raising interest rates and might even consider easing. In fact, interest rate futures are pricing in an 89% chance of an RBA rate cut this year and an 82% chance of a similar move by the RBNZ.

When the Reserve Bank of Australia met in April, they altered their monetary policy statement to say that “The Board will continue to monitor developments and set monetary policy to support sustainable growth in the economy and achieve the inflation target over time” which suggested that they are moving to a more dovish posture. The Australian dollar plunged in response and remained under pressure since then.

Although AUD/USD is hovering near 2019 lows, the bears could be disappointed by the RBA. The table below shows broad-based improvements in Australia’s economy since the last central bank meeting. Retail sales are up; manufacturing, services, and construction sector activity improved; and job growth accelerated. This won’t be enough to ease the central bank’s concerns, especially with inflationary pressures falling, but it could lead to a tinge of optimism especially with China and US nearing a trade deal. 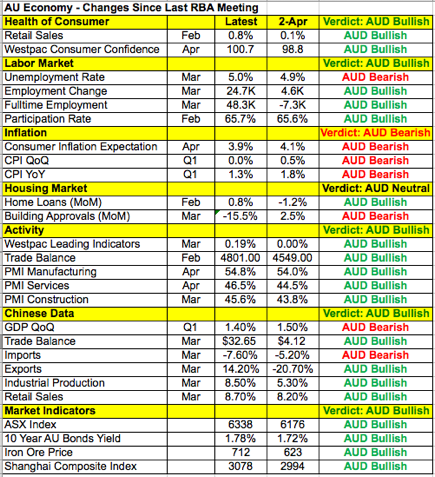 The Reserve Bank of New Zealand on the other hand should be worried. Since their last meeting, credit card spending is down, and labour market, service, manufacturing, and housing market activity weakened. The trade balance is much higher, but inflation is much lower. Back in March, the RBNZ shocked the market when they said a rate cut is more likely now than a hike, as the balance of risks shifted to the downside due to lower business sentiment and a more pronounced global downturn. experienced its strongest one-day decline in seven weeks. It could fall further if the central bank reaffirms their dovishness. should also break out of its week-long consolidation with Canadian trade, IVEY PMI and employment reports scheduled for release. 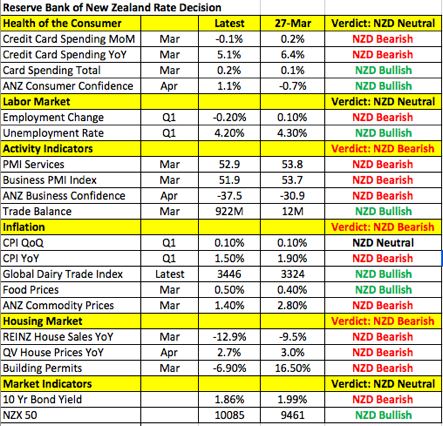 The best performing last week was sterling, which traded sharply higher after the US nonfarm payrolls report. We were actually surprised by the currency’s anemic reaction to the Bank of England meeting because initially, the Bank of England’s lowered inflation projections overshadowed Governor Carney’s positive comments and GDP upgrades. The central bank now sees inflation ending the year at 1.6%, well below their 2% target. They also lowered their inflation forecasts for 2020 but Carney believes inflation and demand will recover strongly over the next 2 to 3 years.

Growth should also stabilize, leading to stronger activity in 2019, 2020, and beyond and if their forecast (which is predicated on a Brexit deal) is correct, more rate hikes than what is currently priced into the curve will be needed. Sterling did not react initially to these comments because there are no immediate policy implications. Until Brexit is resolved, the Bank of England won’t raise interest rates. However, when the NFP report came out, all of the major currencies shot higher versus the greenback and GBP was the biggest beneficiary. If the RBA and RBNZ are dovish, there could be even more significant gains in and . Support in could also break, paving the way for a deeper slide below 84 cents.

Euro: Too Early For A Bottom

It is far too early to declare a bottom in the euro. Although the currency rebounded strongly after Friday’s US nonfarm payrolls report, lower highs and lower lows are keeping the downtrend intact. Initial signs of stabilization are just that: GDP is slightly stronger but below trend and while CPI estimates ticked up in April, they are well below the central bank’s 2% target. Confidence is subdued, retail sales in Germany fell for the second month in a row, and manufacturing activity was weaker than expected. In June, the European Central Bank will release the terms of its Targeted Long Term Refinancing Operation and if we don’t see consistent strength over the next month, the program could be more generous than expected. This week’s revisions to service sector PMI, Eurozone retail sales, German factory orders, industrial production, and trade balance reports are not expected to lend much support to the currency. Until we see consistent improvements in the PMIs or stronger signs of inflation, the path of least resistance for should be lower.