It probably wasn’t what President Donald Trump expected of his health advisor, but the White House’s pandemic specialist Anthony Fauci has made it clear that U.S. states shouldn’t be their economies from COVID-19 lockdowns without ticking enough boxes in guidelines given to them. In an oil market context, this specifically puts gasoline in an awkward spot.

doubled over the past two weeks, keeping pace with the rally in . From a low of 47.4 cents during the week ended April 17, gasoline reached a two-month high of 98.2 cents on Monday, before retreating. Fauci’s testimony before the Senate on Tuesday could curb further upside in the fuel. 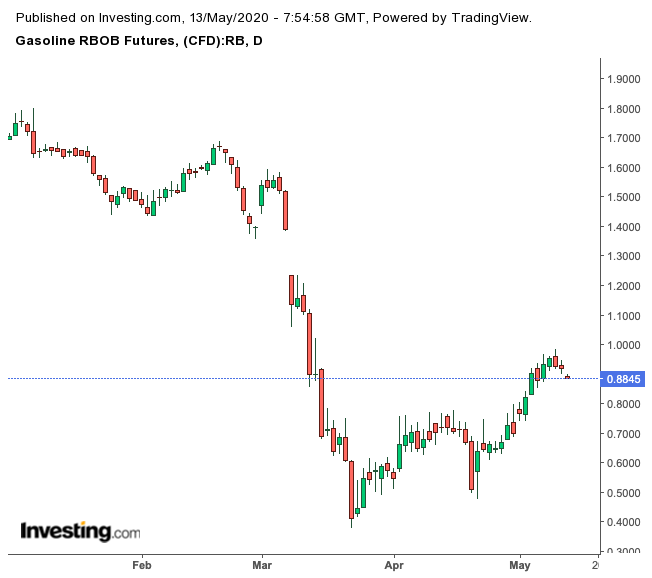 For immediate direction, of course, there’s the Energy Information Administration’s weekly dataset at 10:30 AM (14:30 GMT), which will show if indeed fell by 2.2 million barrels last week after the previous week’s 3.2 million decline. Trade group API’s weekly inventory snapshot, issued ahead of the EIA report, cited a 1.9 million-barrel slide for gasoline that suggests analysts may not be too far off in their estimate.

Yet, regardless of what the EIA says, Fauci’s words may have a greater bearing on the market’s perception for the direction of gasoline going forward.

Why? Because of all the fuel products out there now, the only one that has a chance of keeping the oil rally going is gasoline. Despite most of the 50 U.S. states having reopened, trucking activity has barely picked up; public transportation remains under-utilized as many people continue working from home and non-essential flying hasn’t taken off. In such circumstances, the only source of demand may come from driving.

Thus, Fauci’s warning against rushed reopenings may have a profound effect on gasoline, particularly if it adds to restrictions in states such as California, New York and Pennsylvania that have been much slower than others in easing lockdowns. A new wave of COVID-19 infections in China, South Korea and Germany have reinforced fears that a similar phenomenon may occur in the United States.

Better Not To Be Cavalier With Virus: Fauci

More importantly for students though, until regular lessons resume for them in the classroom, their parents’ work-life balance remains in limbo, complicating governors’ reopening plans for their states.

“We don’t know everything about this virus,” Fauci said on Tuesday. “I think we better be careful (that) we are not cavalier in thinking that children are completely immune to the deleterious effects” of COVID-19.

For hedge funds that have gone long gasoline, the medical complications preventing the quick reopen hoped for by the Trump administration adds a new layer of risk.

“It is the timing of Dr. Fauci’s comments, rather than their content, that spooked markets though,” , senior markets analyst at OANDA in New York.

“The comments came … after an extended bull run in ‘risk-on’ assets in which markets had unceremoniously been ignoring similar warnings for the past two weeks. It suggests that for now, most of the peak-virus global recovery trade, maybe baked into financial markets and that we are entering a period of sideways consolidation. Investors should be wary of being whipsawed by the daily flip-flops in global sentiment over the remainder of the week.”

But what is the longer-term outlook for gasoline?

GasBuddy, which has been tracking summer road trips by Americans each year, predicts a 44% drop in travel from Memorial Day beginning May 25 through Labor Day, which falls on Sept. 7.

The good thing though was that 31% of those who responded to its annual summer travel survey said they planned to take at least one summer road trip this year.

“Of course the big drop in travel this summer has everything to do with COVID-19,” GasBuddy said in a blog posted Tuesday.

Low gas prices are playing a role, as the national average currently sits more than $1 per gallon cheaper than last year. For those who are planning to hit the road, 36% said the low prices are playing a factor in their decision to do so, compared to just 6% saying so the year before and 5% in 2018.

U.S. consumer data released on Tuesday showed that gasoline prices fell like a stone last month but food prices shot up the most in nearly 50 years, reflecting current ways of living.

Aside from fledgling demand growth, another reason for the strength in gasoline prices over the past two weeks was the fairly decent margins for refining, or cracking out, the motor fuel from crude. As of Tuesday, refiners were getting about $14 per barrel for the so-called gasoline-crack.

For all of 2020, EIA forecasts that U.S. motor gasoline consumption will average 8.3 million barrels daily, a decrease of 11% compared with 2019, while jet fuel and distillate fuel oil consumption will fall by 25% and 10%, respectively, during the same period.