HomenewsCurrency ForecastGBP/CAD Could Be Setting Up For A Large Drop

GBP/CAD Could Be Setting Up For A Large Drop

On Aug. 30 we warned of a potential bullish reversal for . Having since confirmed the double bottom and moved higher, our focus reverts to its longer-term bearish trend.

We can see on the daily chart that the rally stalled at 1.7190 (near the July 20th lows) and stopped just shy of a bearish trendline. A dark cloud cover warned of a reversal from the highs and yesterday’s bearish session has further reinforced a six-month bearish channel. If the channel is to hold as prices move lower, it leaves potential for a large bearish move over the coming weeks. 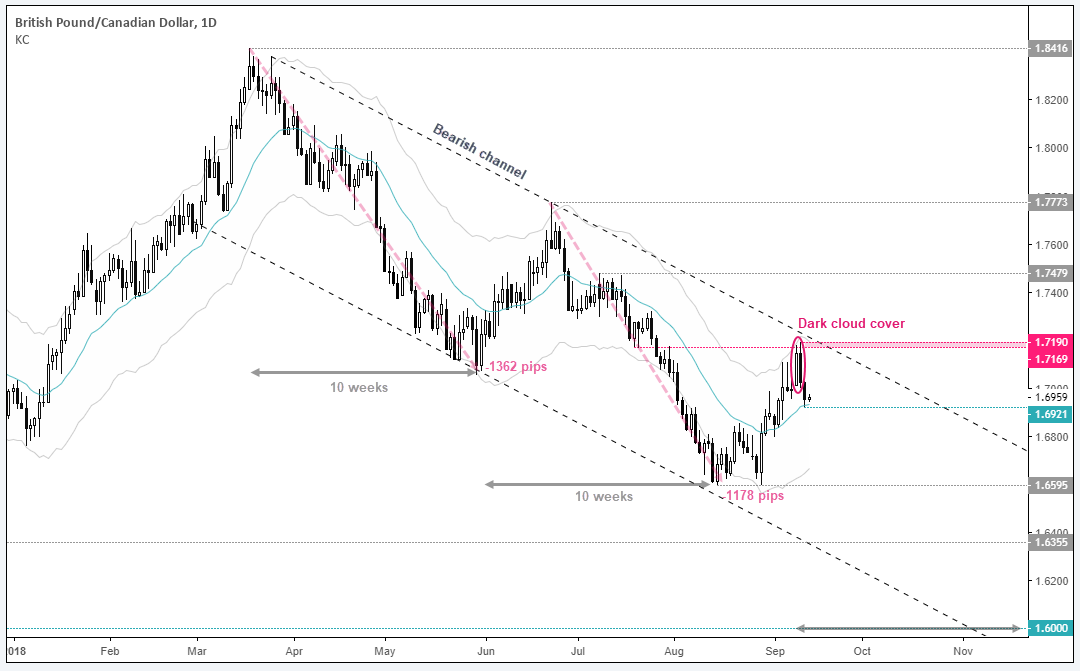 The channel has provided two similar bearish legs; both declined at a similar trajectory and lasted 10 weeks. The first leg was slightly larger with a 1362 pip decline, and the second came in at 1178 pips. Assuming the channel is to hold and price behaviour remains consistent with the first two legs, a 1200 pip drop could see it trade below 1.6000 by mid-November.

Over the near-term, the 20-day average is holding as support which could prompt another attempt to move higher. Although a break of yesterday’s low would also see it beneath the average. Keep in mind that the BOE meet in a few hours which leaves GBP crosses vulnerable to volatility. Furthermore, Brexit and NAFTA negotiations could continue to provide directional cues for both GBP and CAD pairs. But from a technical perspective, while we remain within the channel the bias remains bearish.