GBP: Brexit turmoil has seen the Pound plunge over 1.5%, hitting lows of 1.2750. Much of the losses had stemmed from the announcement by Former Brexit Minister Raab that he would step down. Since then, several ministers have also handed in their resignation as Theresa May fails to unit her party over her Brexit plans. Consequently, PM May looks set to face a leadership contest with ministers beginning to submit their letters of no-confidence, most notably from key Brexiteer, Jacob Rees Mogg. Given the Brexit turbulence, money markets have priced out a BoE rate hike for 2019, while the FTSE 100 has erased its morning gains and looking to test the 7000 level.

How Does a No-Confidence Vote Work

USD: The US Dollar is marginally higher this morning, yielding support from the Federal Reserve’s balance sheet unwind. Typically, this has boosted the USD, while risk assets have dropped amid the net negative impact on USD liquidity. Elsewhere, on the data front, US retail sales had been relatively mixed with the headline figure printing above analyst estimates, however, matched with a downgraded revision to the prior months figure..

Crude Oil: Brent and WTI crude oil continues to trade at elevated levels. However, with yesterday’s API report producing another build, oil glut worries may begin to weigh on prices. If the EIA inventory data confirms an increase in stockpiles. This will represent an 8th weekly consecutive build, which in turn may limit the upside in prices. Elsewhere, in response to OPEC sources suggesting they are looking at a 1.4mbpd cut, Russia have stated that they will not be looking at joining OPEC in reducing production. This in turn may reduce the influence than an OPEC production cut would have given Russia’s dominance in the oil market. 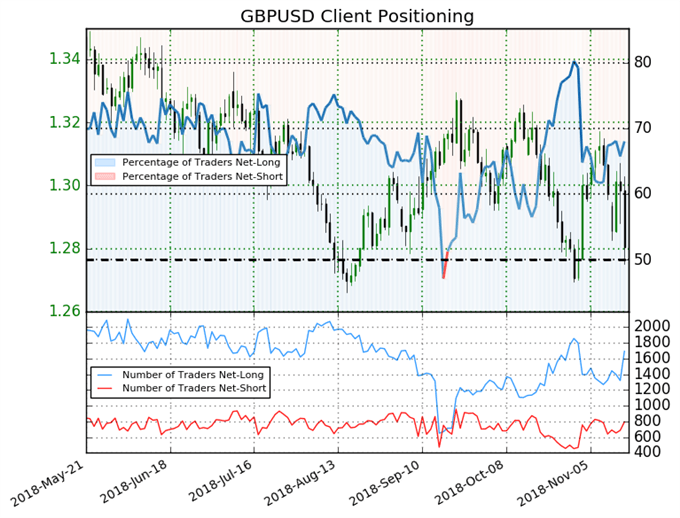 We typically take a contrarian view to crowd sentiment, and the fact traders are net-long suggests GBPUSD prices may continue to fall. Traders are further net-long than yesterday and last week, and the combination of current sentiment and recent changes gives us a stronger GBPUSD-bearish contrarian trading bias.