GBP/USD: Everything Indicates It Will Drop Further

The pound is currently suffering against the U.S. dollar, and three reasons explain this:


The BoE Governor pessimistic about the economy

Yesterday, Bank of England Governor Mark Carney said that the BoE’s economic growth forecast will be lower than expected in the second half of the year. The bank would re-evaluate Brexit and trade tensions in August. However, he reiterated that if Brexit progressed smoothly, then limited and gradual increases in interest rates would be needed. This news comes after Moody’s warning about the harmful effects of a Brexit without agreement on the economy. The rating agency now estimates that the UK “would likely enter a recession” if it left the EU without an agreement.

Unfortunately, it is clear that the chances of this happening are high.

Hard Brexit on the rise

As data accumulates against the pound sterling, so are domestic political developments. On Monday, members of Parliament failed in their last attempt to stop a Brexit without agreement, while Boris Johnson’s bellicose approach to Brexit also baffled sterling traders. With the two Conservative leadership candidates willing to accept a Brexit without agreement, the outlook for the pound is mediocre.

The UK construction sector had its worst month in June for more than 10 years as the Brexit crisis prevented companies from investing for the long term.
Construction’s PMI fell yesterday to 43.1, its lowest level since April 2009, as the country was hit by the global financial crisis.
The market expected the index to increase from 48.6 in May to 49.3.

Regarding the technical analysis, the daily data show a pair that has failed since May 21 around an oblique resistance and is heading to its recent low at 1.25.
This level crossed the next support is at 1.2403. If the economic data as well as the political news continue to deteriorate, especially concerning the Brexit, it is very likely to see a return on the zone of 1.20. 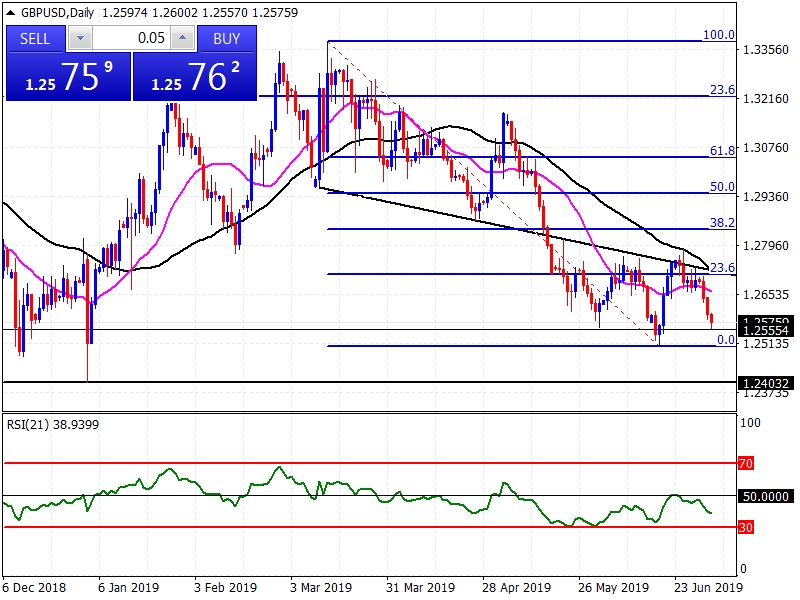