GBP/USD slipped to a fresh weekly low (1.4161) as updates to the U.K. Retail Sales report showed a 0.5% decline in March, and the pair remains at risk of facing a larger pullback as it extends the series of lower highs & lows from earlier this week.

The recent batch of lackluster data print should keep the Bank of England (BoE) on the sidelines at the next meeting on May 10 as ‘the steady absorption of slack has reduced the degree to which it is appropriate for the MPC to accommodate an extended period of inflation above the target,’ and fresh comments from board members Jon Cunliffe and Michael Saunders may keep the British Pound under pressure if the officials largely endorse a wait-and-see for monetary policy.

However, a slew of hawkish comments may curb the recent weakness in GBP/USD as the Monetary Policy Committee (MPC) appears to be on courses to implement higher borrowing-costs over the coming months, and the central bank may increase its effort prepare U.K. households and businesses for another rate-hike as ‘an ongoing tightening of monetary policy over the forecast period will be appropriate to return inflation sustainably to its target at a more conventional horizon.’

With that said, the broader outlook for GBP/USD remains constructive as both price and the Relative Strength Index (RSI) largely track the bullish trends carried over from the previous year, and the broader shift in pound-dollar behavior may continue to unfold in 2018 as the BoE alters the path for monetary policy.

For more in-depth analysis, check out the Q2 Forecast for GBP/USD 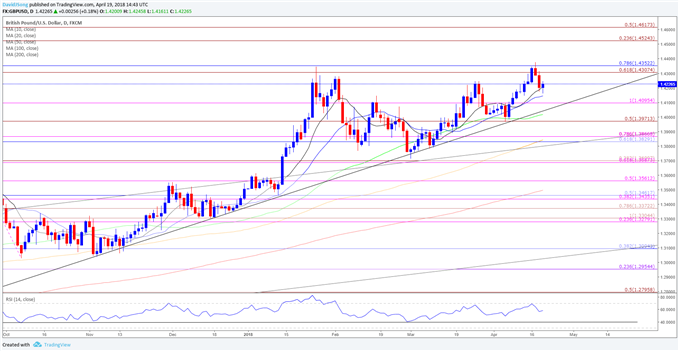 NZD/USD remains under pressure as New Zealand’s Consumer Price Index (CPI) slows to an annualized 1.1.% from 1.6% in the fourth-quarter of 2017, and the pair may continue to give back the advance from the April-low (0.7195) as the bullish momentum appears to be abating.

The second consecutive decline in the headline reading for inflation is likely to discourage bets for higher interest rates even as Governor Adrian Orr takes the helm, and the Reserve Bank of New Zealand (RBNZ) may retain the record-low cash rate throughout 2018 amid the ongoing reforms at the central bank.

With that said, Governor Orr may merely stick to the current script at his first rate decision on May 10, with the New Zealand dollar at risk of facing as larger correction over the near-term as the Relative Strength Index (RSI) flashes a bearish signal. 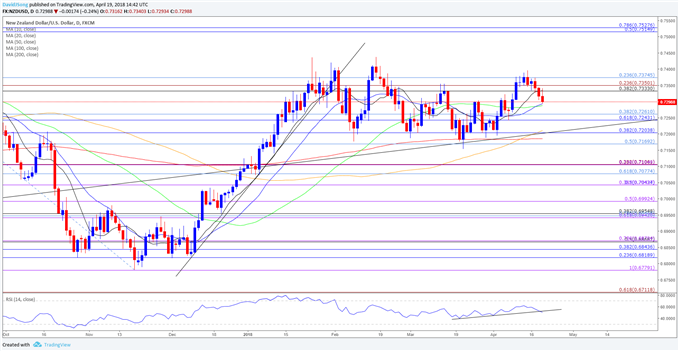 New to the currency market? Want a better understanding of the different approaches for trading? Start by downloading and reviewing the FREE DailyFX Beginners guide!