Sterling, Brexit and US dollar:

The UK Parliamentary Brexit agreement vote, scheduled for Tuesday, is said to have been postponed according to multiple sources, and Sterling is believing it so far. GBPUSD has fallen to a new 18-month low of 1.2651 while EURGBP has jumped to a three-month high of 0.9025 in choppy trading.

While talk swirled around this morning about a possible vote cancellation, it now looks increasingly likely and the market does not like it. UK PM May’s position now becomes increasingly untenable and all possibilities are now open. In addition, the EU Commission recently said that the current Brexit vote on the table is the best and only one and would not be changed. PM May’s unpopular deal was expected to be rejected by a heavy majority, leaving the UK trapped with either a no deal or no Brexit as we stand. 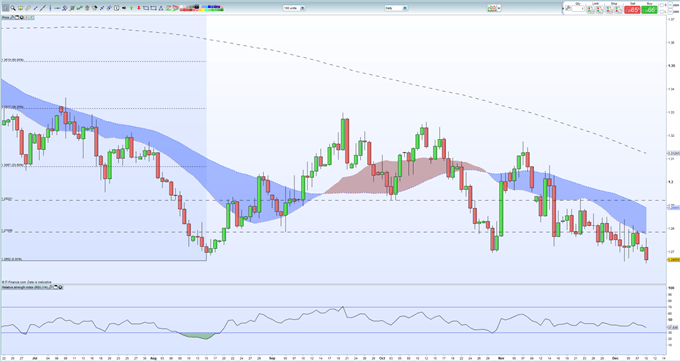 Retail traders are 69.8% net-long GBPUSD, according to the latest IC Client Sentiment Data, a bearish contrarian indicator. However, recent changes in daily and weekly positions currently give us a mixed trading bias.