– UK PM Theresa May’s EU-UK Withdrawal Agreement has been defeated again, this time by a margin of 286 votes in favor to 344 against.

– European Council President Donald Tusk has called for an emergency Brexit summit on April 10; the UK is set for a no deal, ‘hard Brexit’ on April 12.

Looking for longer-term forecasts on the US Dollar? Check out the DailyFX Trading Guides.

UK PM Theresa May’s EU-UK Withdrawal Agreement has been defeated again, this time by a margin of 286 votes in favor to 344 against. The third failed vote now puts the prime minister in the uneasy position of feeling immense pressure to resign.

After reaching an agreement with the European Commission to extend the Brexit deadline to April 12, the failure of the third vote means that a no deal, ‘hard Brexit’ is possible in two weeks time. European Commission President Donald Tusk has called for an emergency summit on April 10 in hopes to avoid the worst case scenario. 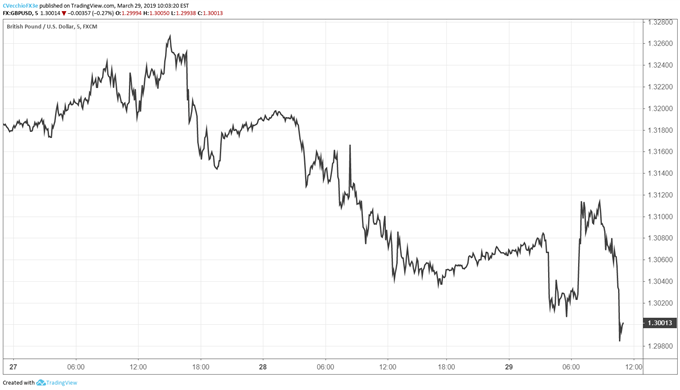 Following the news of the vote failing, GBPUSD immediately dropped from near 1.3065 to as low as 1.2984. At the time this report was written, GBPUSD had recovered to 1.3001.