GBP: The Pound continues to power on with GBPUSD reclaiming 1.33, briefly hitting highs of the 1.3336 in the European session. While clarity is still lacking in regard to whether PM May will reach an acceptable deal, markets remain GBP bullish as no-deal Brexit risks fade with a potential deal tilting on the softer side. Today will see the parliament vote on a series of MP amendments, however, following PM May’s speech yesterday, that there will be a vote on a no-deal and Brexit extension. Today’s vote is unlikely to provide much in the way of notable volatility. Elsewhere, a report in the evening standard highlighted that the EU could offer a Brexit delay of up to 2yrs if PM May’s deal fails. However, while a Brexit delay is seen as good news for the Pound, the uncertainty will continue to linger. Topside resistance at 1.3450, while EURGBP eyes a test of 0.85.

USD: The downtrend in the USD continues as uncertainties begin to ease with markets having a more constructive outlook regarding trade wars, while no-deal Brexit concerns also dissipate. Yesterday, Fed Chair Powell’s testimony failed to provide much in the way of new policy signals, thus keeping the USD rather muted, while US yields also edge lower. 10yrs yields are now looking for a move towards 260bps, whereby a break below could exacerbate USD losses. Another round of commentary from Fed Powell is unlikely to provide a meaningful move in FX, given what we saw yesterday. As such, data will take precedence with durable goods and pending home sales scheduled at 1500GMT.

CAD: The Loonie has benefitted from the gains observed in the oil complex, in which Brent crude reclaimed $66/bbl. Elsewhere, Canadian CPI slightly missed analyst forecasts with the headline weighed by the Q4 drop in energy prices, however, the BoC’s preferred core measure had been unchanged, thus keeping CAD supported. While USDCAD tests key support at 1.3120 (CAD technical analysis), near-term risks may come in the form of US-Canada trade, following reports that Canada may not ratify USMCA if the US do not lift aluminium tariffs, while USTR Lighthizer (Scheduled to speak at 1500GMT) may announce hurdles in passing USMCA through congress.

AUD: The Aussie is down under this morning, underperforming in the G10 space as weak domestic data overnight from the construction sector provides a reminder that next week’s GDP report is skewed to the downside. Alongside this, weakening iron ore prices (-3% WTD) have also added to the pressure on the Australian Dollar. As such, AUDUSD yet again failed to make a topside breach above the 0.72 handle.

JPY: Escalating geopolitical tensions between India and Pakistan after the latter shot down 2 Indian fighter jets spooked equity markets overnight with safe haven flows supporting the Yen. Eyes will be on for further escalation, which could keep JPY supported, while INR continues to weaken. 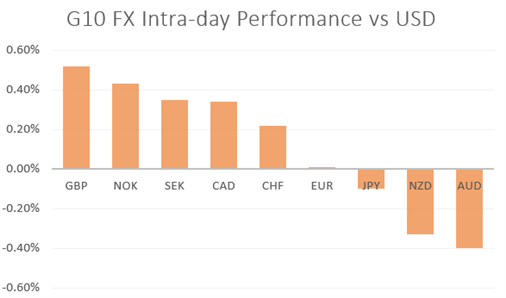