The U.S. dollar traded lower against most major pairs on Thursday. The United States announced earlier in the day that it would apply tariffs on steel and aluminium imports form EU, Canada and Mexico. The NAFTA pairs depreciated as a wave or retaliatory moves are expected. U.S. Trade Secretary Wilbur Ross said the tariffs are the result of unproductive negotiations on broader trade deals. While this is the first shot in a trade war there is still hope that during the G7 meetings this issue is ironed out with a more positive outcome benefiting the global economy. The Italian political crisis was averted as the coalition got the approval of the Italian president, with a new government to be sworn in the next 24 hours. Up next will be the release of the biggest indicator in the markets – the U.S. non-farm payrolls (NFP) on Friday, June 1.

The gained 0.25 percent on Thursday. The single currency is trading at 1.1690 after getting a boost from the end of a short lived but impactful crisis in Italy. The coalition between the 5 Star movement and the League was momentarily derailed with a new round of elections a possibility. Both parties tweaked their list of ministers and this time it was approved by Italian President Sergio Mattarella. 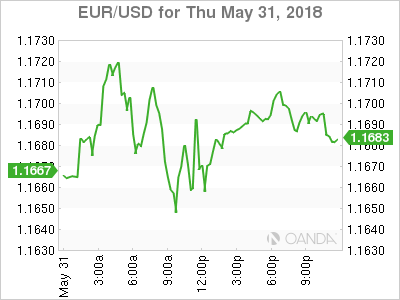 European inflation surprised to the upside with the CPI flash estimate up 1.9 percent on a 1.6 percent forecast and the core CPI (food, energy, alcohol, and tobacco) up 1.1 percent. The rise in the cost of living will put some pressure on the European Central Bank (ECB) to give further details on its monetary policy plans after its QE program ends in September. The Italian near crisis reminded everyone of the high levels of debt in the country and the last thing needed at this point is higher rates, but inflation might be pushing the ECB towards that path.

The president of the European commission, Jean-Claude Juncker, announced that retaliation to U.S. products will be in effect if the U.S. moves forward with the 25% duty on steel and a 10% duty on aluminium. The tariffs were announced two months ago, but U.S. allies were excluded, but given he slow progress of the trade conversation with the EU, Canada and Mexico that exemption has been lifted.

While trade war headlines will splash across financial news sites the market will be anticipating the release of the U.S. non-farm payrolls (NFP). The employment component has been the strongest pillar of the U.S. comic recovery. The current unemployment rate is the lowest since the year 2000 and wages are starting to grow after stagnating after the recession.

Loonie Lower as Canada to Retaliate Against US Tariffs

The gained 0.72 percent in the last 24 hours. The currency pair is trading at 1.2966 after the exception for Canadian steel and aluminium exports to the U.S. was lifted. Canadian Prime Minister Justin Trudeau said the move was unacceptable. Canadian Economy Minister Chrystia Freeland said that a matching tariff will be imposed on U.S. products, with additional duties for food products such as orange juice and whisky. 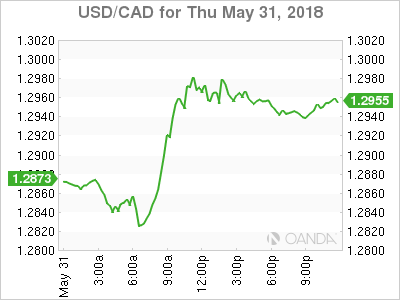 Canadian Finance Minister Bill Morneau stressed the need to defend the interests of Canada. The U.S. is calling the need for tariffs one of national security with the Canadian PM calling it absurd as the nation has been a steadfast ally in times of war and peace. The loonie had gained momentum after the Bank of Canada (BoC) rate statement on Wednesday. Although the central bank did not lift its interest rate it was hawkish enough that a July move was on the table. The CAD fell after the possibility of a trade war with the U.S. after a long but unfruitful negotiation of NAFTA could mean the end of the treaty.

The currency is near the 1.30 price level as the trade agreement is under serious threat as the White House is once again playing hard ball.

Despite the comments from the G7 Finance meeting in Canada on global growth the fact remains that trade wars are bad for business. Crude has been on decline as the Organization of the Petroleum Exporting Countries (OPEC) and Russia are considering easing some of the production limits they agreed to stabilize prices. The release of the weekly crude stock data in the U.S. was on Thursday to account for the long weekend. A larger than expected drawdown of 3.6 million barrels should have been supportive of higher crude prices. And that was the case at the 11:00 a.m. EDT mark, but as trade concerns rose, the black stuff went the other way. 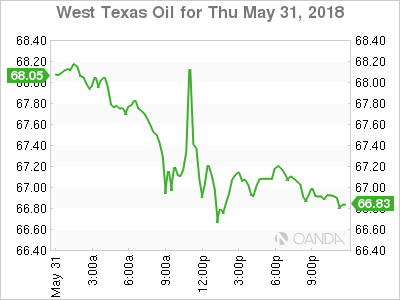