Has The U.S. Dollar Peaked?

For the past 2 months, the has been on a tear. However, despite hitting multi-month highs against , the , and dollars, at the end of last week, the cracks began to show.

The greenback pulled back against all of the major currencies except for the loonie. The move had little to do with US data. Instead few positive developments abroad triggered profit-taking on long US dollar positions. Although their recoveries were muted by the beginning of the week, the best-performing currencies last week were the and the . The worst performers were the Canadian and New Zealand dollars. Looking ahead with no major US economic reports to support the greenback, USD is vulnerable to a deeper correction that could make pairs like GBP/USD and AUD/USD attractive buys and USD/CHF and USD/JPY attractive sells for the week ahead. 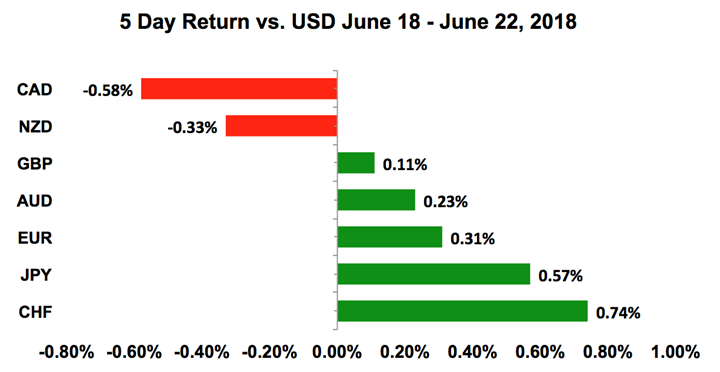 There are a number of forces pressuring the US dollar lower from profit taking, the drop in US stocks, the slide in US yields to President Trump’s relationship with the rest of the world. The US’ trade war also puts pressure on the markets and the US Supreme Court’s ruling that state sales tax can be collected from online retailers is bad news for stocks. Yet one very strong reason why investors won’t stop buying US dollars is the upward trajectory in US rates. Week after week, US policymakers go out of their way to remind everyone that interest rates are on the rise. At the ECB forum in Portugal last week, Fed Chair started his speech by saying the case for continued gradual rate hikes is strong. He also expressed his confidence in the labor market and inflation. Most importantly, Powell said as is US policy is still accommodative because rates may be 100bp under their neutral level. So US rates won’t peak until the middle of next year, which would be the time when many central banks are just beginning to tighten. This provides the fundamental basis for the ongoing uptrend in the dollar and a reason why investors will be looking to buy and not sell the dollar (particularly USD/JPY) when it falls. Now back to the question of whether it is time to sell dollars – in the week ahead, we see scope for a further correction which could give short-term traders an opportunity to fade recent moves. In the long term, unless something significant changes from an economic or political perspective that leads investors to believe the Fed will raise rates by another 25bp instead of 50bp this year we won’t see a significant drop in the greenback.

Last week’s Bank of England is a game changer for . Although the BoE left interest rates and monetary policy completely unchanged, sterling jumped nearly 2 cents after the central bank revealed that 3 of its members voted in favor of an immediate rate hike. Chief Economist , who is an influential member of the BoE switched his vote and joined and Haldane in favor of tightening. Their hawkish and policy statement suggests that more will follow in the coming months, paving the way for a hike in August or December. With all MPC officials seeing slack in the labor market largely used up, more dissenters will follow in future meetings as the central bank believes that ongoing policy tightening will be appropriate. However, when it begins, it will be gradual and limited.

The fact that the BoE even discussed gradual reduction in quantitative easing or rate hikes is extremely positive for sterling and provides cause for a more sustained recovery against most of the major currencies. Rate-hike expectations for August increased to 70% from 52% the week prior and the odds that a move will be made by December have risen to 76% from 63%. The reason why these 2 meetings are the main focus is because they are accompanied by the report and a press conference by Governor . The only and perhaps greatest risk for GBP is Brexit negotiations but the lack of market-moving UK data this week should help sterling extend its gains, particularly versus the , the and commodity currencies. We also see breaking above 1.33 in a more meaningful way although this trade is trickier as the Federal Reserve will also be raising during this period. As for Brexit, things still don’t seem to be going Prime Minister May’s way, so expect more infighting within the UK government and ongoing resistance to amenable terms from the European Union who says they will back Ireland “every step of the way,” and while “no Brexit deal is not likely, its also not impossible.”

spent most of the week trading below 1.1650 before breaking up to 1.1670 on Friday. However, unlike some other major currencies, it did not trend lower throughout the week and mostly consolidated between 1.15 and 1.1650. This tells us there’s a lot of demand below 1.15, which is an important support level but fundamentals, technicals and the political environment could limit the rise in the euro especially versus the British pound, Swiss Franc and Japanese Yen. EUR/USD itself is vulnerable to a relief rally that should attract sellers around 1.17. Although manufacturing and service sector activity accelerated in the month of June, these readings are at 17-18 month lows and on a fundamental basis, the European Central Bank said this week they see higher reinvestments in QE, which will cushion the end of bond purchases. The central bank made it clear that policy needs to remain accommodative and some officials even went so far to say that rates could remain unchanged beyond the summer of 2019. Germany’s business confidence (IFO) and employment report are scheduled for release this week and we don’t think these reports will provide much support for the euro. Technically, EUR/USD is still trading below the 20-day SMA and is vulnerable to a pullback but the greatest risk is political. German Chancellor Merkel has less than a week to reach an EU deal on migrants or risk a collapse of her government. Ms Merkel is insisting that Germany abide by a pan-European solution while Bavaria’s Christian Social Union is pressing for a German only policy response. The friction is so tense that markets are becoming genuinely concerned that her government could fall and this risk could lead to further weakness in the currency. Merkel’s party said they are prepared for new elections.

After hitting 1-year lows against the , we are finally seeing signs of exhaustion in commodity currencies. These moves have nothing to do with the outlook for those respective countries outside of the inflationary impact of weaker currencies. With that in mind, Reserve Bank of Governor Lowe said that inflation might be lower than they’d like for a while, a sign that there’s no urgency to tighten in Australia. The outlook has been improving according to the RBA minutes. Wage pressures are building in some parts of the economy and forward data suggests that the jobless rate will decline but the lack of Australian data this week means that the performance of AUD will hinge on the market’s appetite for US dollars. If the greenback continues to retreat, AUD/USD could rise back above .7450.

The New Zealand dollar will be on the move with a Reserve Bank of New Zealand monetary policy announcement on Thursday. When they last met in May, they were unambiguously dovish, sending to 5-month lows. RBNZ Governor Orr felt that core inflation is lower than where they’d like and as such pushed out their forecast for inflation returning to target to Q3 instead of Q2 of next year. There’s very little to be positive about this month with business confidence falling, GDP growth slowing and service sector activity losing momentum. The only good news is that manufacturing activity accelerated but unfortunately that won’t be enough to change the RBNZ’ bias. This week’s policy statement should make it clear that they will still be one of the last central banks to raise interest rates and any underperformance of the New Zealand dollar should be the most pronounced against sterling and the Australian dollar. 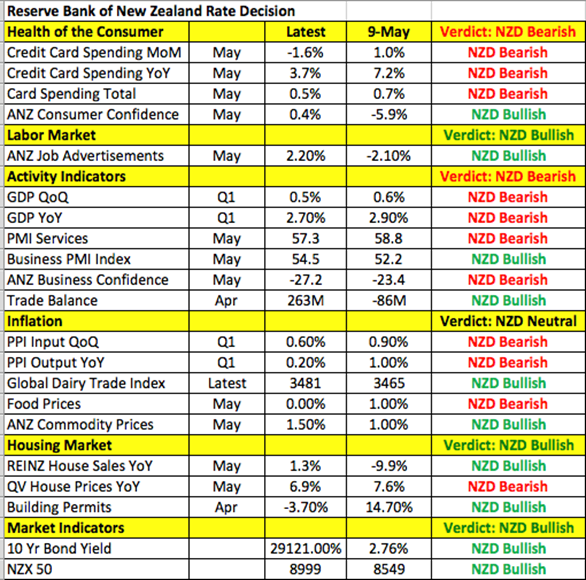