HomenewsCurrency ForecastHere’s Why A Trade War Is Helping The U.S. Dollar

Here’s Why A Trade War Is Helping The U.S. Dollar

The is on a tear as it reaches for 6 to 12-month highs against other the major currencies.

While the and ’s monetary policy announcements were the biggest events of the previous week, the US’ trade war with the rest of world is having a greater impact on currencies. Although many people feared that a trade war would exacerbate the dollar’s troubles and reduce demand for the greenback, it instead sent the dollar soaring as investors interpret Trump’s aggressive trade actions as short-term trouble for countries he’s singling out. The US tariffs on China reversed the dollar’s post-FOMC slide and sent tumbling 2.5 cents in one day. The euro and s were last week’s worst-performing currencies. Traders should expect things to worsen as the US now risks retaliation from China after having officially slapped tariffs on hundreds of products. The European Union also endorsed a plan for tariffs on US products that will be implemented in late June, early July. The European Commission meets on Wednesday, June 20th and they could very well back “counter-balancing measures.” All of this means that currencies will be particularly sensitive to headline risk this week. 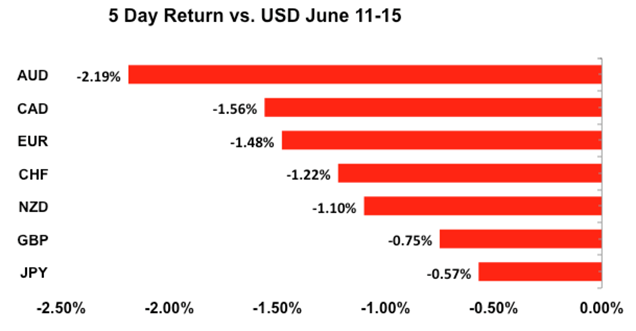 There’s no doubt that everyone is worried about the trade war. In the long run, a trade war reduces demand for US products and in turn the US dollar. It also makes the greenback less desirable as a reserve currency. It could lead to weaker global growth and slower unwinding of monetary stimulus. If lower trade drags down US GDP growth, it could mean less tightening by the Federal Reserve. None of this is dollar positive and yet the greenback is soaring on the US tariffs and threats/plans of retaliation from other nations. The reason why the dollar is behaving this way is because while a trade war is bad news for everyone, it is even worse for the countries being singled out as many of them rely heavily on US demand. The US could survive by selling fewer goods abroad but other countries could suffer greatly. That’s why they won’t stand by idly. China, in particular, could unleash a raft of tariffs on key US products, threaten to sell US Treasuries and US dollars. So while the dollar may be rising in the short term as a safe haven play, the harder Trump pushes other nations the more trouble he creates for the dollar in the long run.

The Federal Reserve raised interest rates by 25bp for the second time this year and the dot plot shifted in favor of 2 additional rounds of tightening in 2018. They upgraded their GDP, inflation and unemployment forecasts in a move that took to 110.85. Although the greenback gave up its gains shortly after, the US’ trade actions revived the rally in the greenback. The most important takeaway from the Fed meeting is that they have no plans to stop tightening until the middle of next year at the earliest. For the time being, they are the only major central bank raising interest rates. Although Fed Chair Powell said not much has changed since March, the latest economic reports were strong with inflation on the rise and retail sales growing at its fastest pace in 6 months. The dollar is in demand and could see new highs in the coming week despite the lack of US data. Traders should keep an eye on US yields and news headlines for direction.

took a backseat during the FOMC and ECB meetings but will be in play this week with a Bank of England monetary policy announcement. Unlike the Fed and ECB, no major policy changes are anticipated and Governor Carney will not be holding a press conference. This means the reaction in sterling could be moderate compared to the wild swings in the dollar and euro last week. With that in mind, the BoE minutes will be released with the policy decision and investors will be eager to see if there are any changes to the voting record. When they last met in May, the monetary policy committee voted 7 to 2 to leave rates unchanged. The central bank expressed concerns about inflation cooling but Governor Carney said a rate hike is “likely by the end of the year.” Investors are pricing a 65% chance of a quarter-point hike in November or December. According to the table below that shows how the U.K. economy changed since May, there are plenty of reasons for U.K. policymakers to be more optimistic. Retail sales rebounded strongly in May, inflation is on the rise and the PMIs show economic activity expanding at a faster pace. The only real problem is wage growth but the slowdown shouldn’t be significant enough to alter the central bank’s outlook. So if the policy statement and the minutes maintain an air of optimism, sterling could recover against the dollar and extend its gains versus the euro. 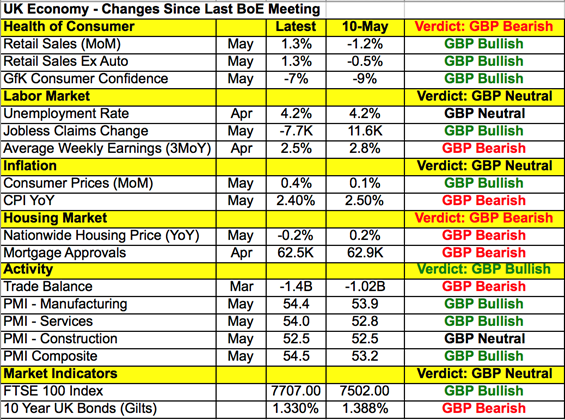 Reversals also hit this past week with the single currency tumbling after the monetary policy announcement. Like the greenback, the euro ran up before the European Central Bank meeting, hitting a 5-week high immediately after the release of the policy statement. But it U-turned shortly thereafter erasing weeks of gains. The big news was that the ECB will be tapering asset purchases after months of speculation and will be halting QE buys by the end of the year. They also said interest rates would remain unchanged until at least the summer of 2019. The ECB was very clear in their forward guidance, which may lead to the euro’s demise. Although their actions were unambiguously hawkish, they also let the market know that there are no plans for major policy changes in the next 12 months. Mario Draghi thinks inflation will rise but they lowered their 2018 GDP forecasts and expressed concerns about global risks (trade) and said the soft patch in certain countries may last longer than implied in their forecasts. While we believe that growth in the eurozone will start to improve in the coming months, US rates are not expected to peak until the middle of next year, a period during which ECB policy will remain unchanged. The EU’s import tariffs also mean that the eurozone is in a trade war with the US—a development that merits continued monitoring over the next few months. This week’s Eurozone PMI reports could have a significant impact on how EUR/USD ends the month. If manufacturing and sector activity weakened, the sell-off should exacerbate. However, if the tides finally turn and data improves, it could be significant enough to trigger a near-term bottom for the euro.

The commodity currencies also fell sharply last week with the Australian dollar leading the slide. Although consumer confidence improved, business confidence weakened in the month of May, home loans continued to fall and most importantly, job growth was less than expected in May, with more than 20K full time jobs lost last month. The unemployment rate improved but only because participation was weaker. Job growth in April was also revised lower. Not all news was bad news however as consumer inflation expectations rose to its strongest level in 10 months. If prices continue to rise, the Reserve Bank could grow less dovish. The RBA minutes are due for release this week and they are not expected to provide any help to the Aussie because when the central bank last met, it sent the currency lower by expressing concerns that inflation will remain low for some time. This week, RBA Governor Lowe said it would be some time before interest rates are increased. This neutral outlook has and could continue to keep the Australian dollar under pressure. This year’s low of .7412 in could be challenged as a move above .7750 is needed to shake off the downtrend.

The also traded lower against the greenback, but its losses were not as significant as the Australian dollar. For this reason, broke down, trading its weakest level since May 9th. Data was softer all around with growth weakening and manufacturing activity growing at a slower pace in May. First quarter GDP and current account numbers are scheduled for release from New Zealand this week and growth are expected to have slowed, which be in line with the Reserve Bank’s cautious outlook. As a result, is vulnerable to additional losses below 69 cents.

The , on the other hand, fell to its weakest levels in a year as trade tensions between Canada and the US heat up. With no major Canadian economic reports to boost sentiment, investors looked past the rise in oil prices and instead allowed the US dollar component of to take the pair higher. Retail sales and consumer prices will be released from Canada at the end of this week and while the central bank has grown less dovish, weaker labour data and lower manufacturing prices point to a potential softness that could take USD/CAAD to fresh highs. The only way for the Canadian dollar to reverse its trend right now is if Trump’s attitude towards Canada suddenly shifts, which could happen given how often the US President changes his views.