How Monetary and Fiscal Policy Can Amplify or Stave Off Crises

Why financial market traders must monitor both monetary and fiscal policy:

Trading the financial markets when economic conditions are poor, it is more important than ever to monitor both government fiscal policy and central bank monetary policy. It’s even more crucial when there are concerns that a slowdown could lead to a full-blown recession

That’s because the proper policy adjustments can avert a true crisis and prompt recovery, while the wrong strategy can potentially hasten and/or exacerbate the collapse.

What is the difference between monetary and fiscal policy?

While a coordinated, complementary response to the threat of a crisis is ideal, a problem in many countries – such as the US, the UK and the Eurozone – is that their central banks are independent and therefore resistant to political pressures to act one way or another. Tax cuts are positive for economic growth, for example, but their impact can be reduced by a central bank that refuses to loosen monetary policy for fear, for instance, of stoking inflation.

In other countries, the wall between the government and the central bank is less solid. In Japan, the Ministry of Finance lost much of its authority over the Bank of Japan in 1997. However, it is still prone to political interference as was made clear when Japanese Prime Minister Shinzo Abe implemented a “three arrows” policy consisting of monetary policy, fiscal policy and economic growth strategies to boost private investment. The government, in turn, has been accused of being influenced strongly by big business, leading to the term “Japan Inc.”

Elsewhere, the central banks in countries such as India and Turkey are under strong pressure to bring their policies more into line with their governments’ fiscal policies. In China, perhaps surprisingly, the People’s Bank of China (PBOC) has some limited independence despite being ultimately controlled by the country’s Communist rulers. Some other Asian countries coordinate monetary and fiscal policy openly.

In the US, President Donald Trump has repeatedly criticized the Federal Reserve and pressed it to cut interest rates – something it has so far refused to do, although reductions are on the cards before the end of 2019.

In a Twitter post in May 2019, Trump argued that “China will be pumping money into their system and probably reducing interest rates, as always, in order to make up for the business they are, and will be, losing. If the Federal Reserve ever did a ‘match’ it would be game over, we win!”

The response to his tweet was broadly negative but, as one commentator said at the time – and as explained above – this is exactly what Japan and China are doing, and Europe would too if it wasn’t worried about losing sovereignty at the country level. Another noted that “The Fed and the PBOC are more alike than you might think”.

Trading markets when central banks run out of options

From a trading perspective, it is the central banks that influence prices more directly. When they decide to raise or lower interest rates, hint that rate changes are on the way, inject money into an economy or drain it out, or devise ever more complex ways to influence the supply of money, prices react immediately.

There is less response to government announcements of tax changes, austerity programs, infrastructure spending and the like – partly because their influence is longer term and partly because they can be offset by the central bankers if they decide, for example, that fiscal largesse is likely to boost inflation. 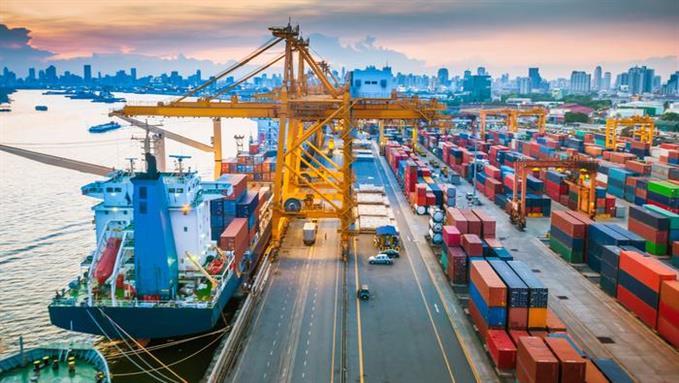 It is important to note, though, that when central banks run out of options, government policy becomes more important for markets. At the time of writing, official interest rates are negative in both Japan and Switzerland, and at zero in the Eurozone. Around the world, creative policies with ever more complex acronyms and various success rates have been introduced to bolster economies when rates can be reduced no further and conventional monetary policy seems to have reached its limit. Here are some of them:

The importance of such measures can be seen in the following chart, which shows how the announcement of the first series of TLTROs by the ECB in June 2014 led to a prolonged slide in EURUSD. 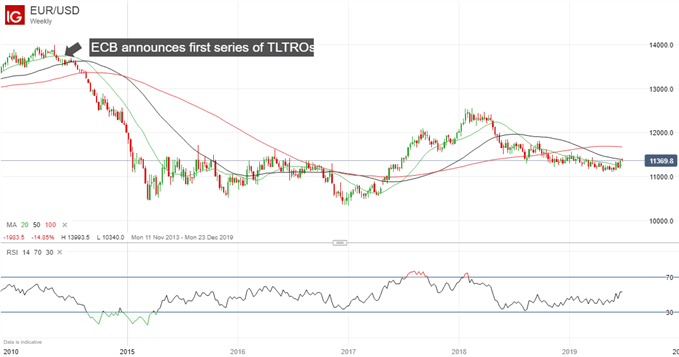 The lesson for traders is therefore clear: central banks and governments both influence markets. Policy announcements therefore need to be monitored closely – and never more so than when there are fears of a downturn turning into a global recession.