How Much Higher Can Amazon Shares Go?

E-commerce powerhouse Amazon.com (NASDAQ:) has rarely disappointed its loyal investors. On May 21, it hit a record high of $2,525, benefiting from the shift to online shopping during the COVID-19 pandemic.

Indeed, over the past five years, the stock has delivered about a 500% return, massively outperforming the benchmark index. 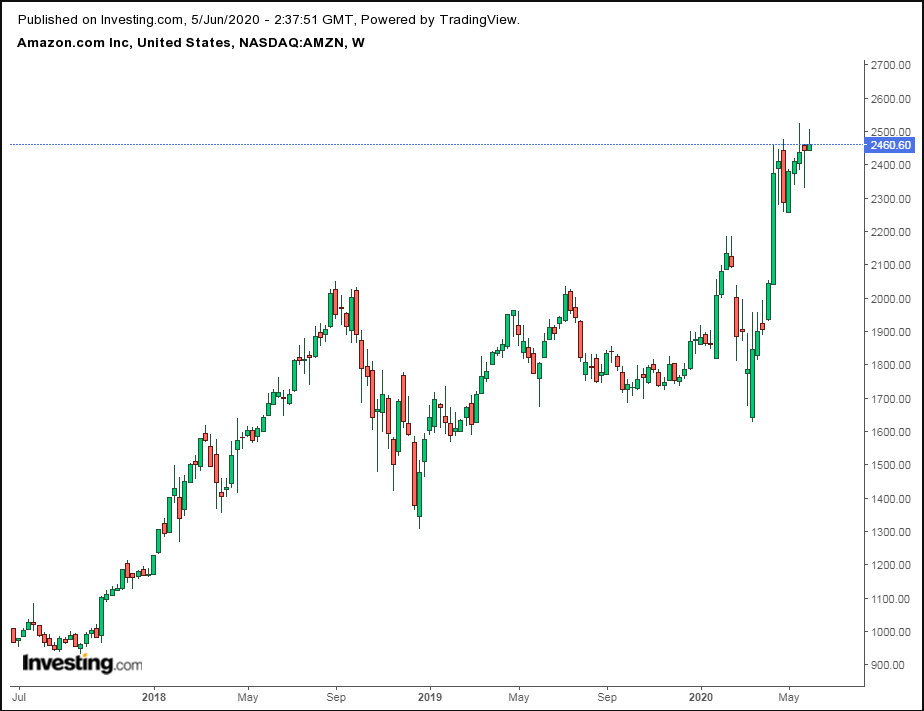 Trading at $2,460.60 at yesterday’s close, Amazon’s shares have gained about 35% this year. While its upward journey continues, investors have been wondering whether this retail giant can keep hitting new highs over the next five years? And, perhaps more significantly, is this a good time to take a stake in Amazon?

The answer is tied to the company’s business model and whether there are any competitive threats to its wide economic moat.

Amazon’s business model perfectly positions it to expand its e-commerce dominance even more broadly at a time when more and more people are making purchases online. One of Amazon’s biggest strengths is its paid membership programs, one of the largest in the world.

In exchange for an annual fee, its Prime membership program offers free, expedited shipping on a variety of items. Members also benefit from streaming movies, TV shows and music as well as members-only deals  Over time, the program has helped entice customers who once might have only used Amazon for books and movies while just browsing its other inventory categories. Today, Prime boasts more than 150 million paid members.

Though Amazon’s online marketplaces generate most of the Seattle-based company’s , it’s not the most profitable segment. Amazon is also the world’s largest cloud-infrastructure provider, with Amazon Web Services generating the largest share of the profit.

AWS is a high-margin business that allows Amazon to provide cash funding to its marketplace strategies, including aggressive promotions and cheap hardware devices.

Backed by these extremely profitable units, Amazon has been able to disrupt an array of industries and can continue to do so for a long time.

The company also has a hardware unit which produces an expanding line of smart speakers and video streaming gadgets. Its Amazon Studios division makes original television shows and movies and is beginning to challenge Netflix (NASDAQ:) and HBO (NYSE:).

In the brick-and-mortar retail space, Amazon hasn’t been secretive about its ambitions. It acquired grocery purveyor Whole Foods Market in 2017 and is now building a fleet of cashier-less convenience stores.

Barclays analysts, in a recent note, said Amazon is still one of the smartest bets for investors, even after its robust performance so far in 2020. “Shares always feel a bit crowded, but in the current environment, we’d rather own AMZN than just about anything else,” the note said.

No investment is without risks and that’s true for Amazon as well. Despite its terrific record at capturing new markets, then becoming a leading player in each of them, Amazon is now encountering traditional retailers who are quickly fighting back, expanding their e-commerce capabilities, while using their massive physical presence to their advantage.

Both Walmart  (NYSE:) and Target (NYSE:) have been showing strong e-commerce growth—each about 30-40% per year—as their stores become fulfilment centers, making it possible for same-day deliveries and curbside pick-ups.

On the cloud-computing side, Amazon is facing fierce competition from Microsoft (NASDAQ:), whose Azure cloud business is growing rapidly. Between the fourth quarters of 2018 and 2019, Azure’s market share rose from 14.9% to 17.6%, according to Canalys. During the same period, AWS’s share dipped from 33.4% to 32.4%.

In the most recent quarters, Azure’s revenue surged 62% annually; AWS’ revenue rose 34%. Amazon also lost the Pentagon’s coveted JEDI cloud contract, which went to Microsoft. It’s worth up to $10 billion over the next 10 years.

Though these risks aren’t insignificant, it’s hard to find an analyst who recommends selling the stock. Among the 47 who cover the stock, 43 have a “buy” rating on Amazon, while the rest recommend holding, with an average price target of $2,675.96 in the next 12 months.

It’s anybody’s guess where Amazon shares will be trading in the next five years. Still, it’s not hard to see that challenging Amazon’s premier position in many of the areas in which it operates won’t be easy. That suggests, for buy-and-hold investors in for the long-term, the stock is one of the safest bets in the tech sector, likely with significant upside.