HomenewsMarket OverviewHow Will Province Of Quebec Pay Back $10 Billion Of Debt?

How Will Province Of Quebec Pay Back $10 Billion Of Debt?

With an updated financial framework in the Pre-Election Report on Quebec’s Public Finances and a promise by the new Quebec provincial Coalition Avenir Québec (CAQ) government to use $10 billion of the Generations Fund to pay back the debt before the end of this fiscal year, we re-estimated the near and medium term borrowing requirements of the province. We find that Quebec’s financing program could be significantly smaller than the 2018 budget estimates. Our revised requirement estimates are $6.7 billion lower for 2018-19 (from $13.4B to $6.7B) and $5.6 billion lower for 2019-20 (from $18.6B to $13B). However, 2020-21 financing requirements could be higher than previously budgeted to the tune of $747 million (from $18.1B to $18.8B). Below, we also discuss how selling assets of the Generation Funds to meet year-end deadline could potentially be challenging.

In its platform, the CAQ committed to use $10 billion of the Generations Fund, which book value is expected to reach $13.3 billion by the end of FY 2018-19, to pay back Quebec’s public debt. The first thing worth highlighting is that the intention of the new government is merely a shift in the timing of the drawdown. Indeed, the previous government had already planned for a $10-billion debt reduction over the next five years, starting with $2 billion in FY 2018-19. Therefore, excluding interests on the debt, the debt reduction over a five-year horizon is the same and is unlikely to create major market disruptions or alter Quebec’s ratings profile.

The net financial benefit of this policy will depend on how the foregone realized returns on the reduced investment in the fund over the next five years will compare with the interest savings of lower borrowing requirements by the Quebec government. Since inception, the return on the investments of the fund has been higher than the marginal average cost of borrowings by the Quebec government. However, now that benchmark interest rates are rising and the business cycle is aging, these excess returns might not materialize again; at least in the near future. Moreover, any leverage strategy that may bring potential financial benefits carries a cost as taxpayers are supporting the risk of such strategy. The risk premium associated to the investment in the funds are not merely excess returns, they represent the cost of the risk taken by the fund and, ultimately, the taxpayers.

The timetable established by the government-elect would give the Ministry of Finance about five months before March 31 to implement its debt-reduction plan. As of Oct. 1st, the government of Quebec and its subsidiaries had around $193 billion of market debt outstanding. However, it is unlikely that the government would elect to buy back issues currently trading in the secondary markets. Signalling its intent to do so could lead to an increase in the price of such securities and thus would cost the government more to buy back its debt than it would otherwise. Implementing the simpler strategy of not refinancing debt reaching maturity is more optimal in our view. Assuming that the Ministry of Finance is not altering its domestic Treasury Bill and U.S. commercial paper programs, its debt retirement options by the end of FY 2018-19 are somewhat limited. Some options are presented in Table 1 below:

By selling assets of the fund to retire two domestically issued securities and a Swiss Medium-Term Note (MTN), the government could manage to reduce its debt by $7.8 billion before the end of the fiscal year (see Table 1). The government could reimburse another $2.2 billion by not refinancing a Euro MTN maturing in late April 2019 for a rounded total of $10 billion.

With interest rates poised to rise, pre-financing is not a bad option from a public finance standpoint. The actual savings from lower interest on debt are also a net positive for Québec’s fiscal stance especially if the returns on the assets of the fund are forecast to underperform. 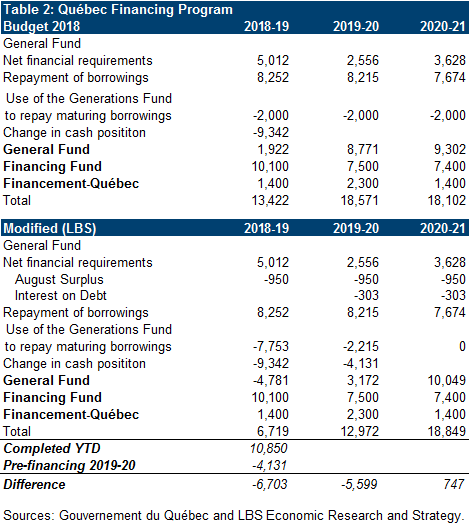 Selling the assets of the Generations Fund

Finally, let us discuss the opposite side of the operation, which consists of directing the Caisse de Dépôt et Placement du Québec (CDPQ) to sell $10 billion of assets held in the Generations Fund. Section G.55 of Budget 2018 reveals that 38% of the fund is comprised of fixed income instruments (nominal bonds, credit and short-term instruments), 16% is real assets (infrastructure and real estate) and the remaining 47% consists of public and private equities (see Chart 1). How the selling of assets will be implemented matters. Indeed, it could be challenging to liquidate 75% of the fund within six months if the government wants to keep intact its asset allocation and risk profile. For one, a significant portion of the fund’s assets are generally characterized as illiquid (i.e. harder to sell on short notice). For example, while public equities could be sold relatively easily, investments in real estate projects, private equity and infrastructure could be harder to unwind before March 31st 2019.

It is unclear if there are $10 billion of liquid assets in the fund. And if so, only selling liquid assets would significantly alter the asset allocation of the fund which could end up, as a result, being riskier and much less liquid. In the situation where both all liquid public equity and safer fixed income products have to be sold to meet the end of year deadline, the fund would only hold private equity, real estate and infrastructure assets. 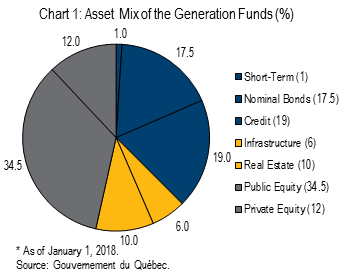