How You Should Trade This Month’s FOMC

Of all the central bank monetary policy announcements this week, the outcome of the ’s will be the least surprising. Having just raised interest rates in June, we know that the Fed won’t be making any changes this month. So the big question is whether the will have any reaction to FOMC – and we think it will. First and foremost, investors want to be long dollars, particularly against the after Tuesday’s Bank of Japan . Although there’s very little risk in FOMC this month, it is still a major event risk and some traders want the all-clear from the Fed before buying. Second, the Fed will tell us that further tightening is needed because the labor market is strong and economic activity is growing at a solid rate. is on the rise, and activity is accelerating while spare capacity is declining so there’s no reason to deviate from their plan to tighten again.

are currently pricing in an 80% chance of a rate hike in September and according to the table below, not much has changed in the U.S. economy since June. Labor-market conditions deteriorated slightly but remains strong, increased, is on the rise and housing activity weakened. Both the and sectors reported stronger growth and on Tuesday we learned that personal and growth are healthy while manufacturing activity in the Chicago region accelerated significantly. So the will most likely highlight the underlying strength of the economy and the uptick in inflation.

A hawkish FOMC statement that echoes the optimism of Fed Chair will leave the market convinced that there will be at least one and possibly even two more rounds of tightening this year and this widening gap between U.S. and Japanese rates should be enough to take above 112. Reports that the U.S. and China are looking to restart trade talks also helps USD/JPY. Last but certainly not least, a hawkish Fed would raise hope that Friday’s will be strong with rising and the falling.

How should you trade FOMC? Chances are there won’t be any major changes to the and if dips on the release, it is a buy. There’s no press conference or forecasts so the reaction should be relatively brief. If there are hawkish tweaks to the statement, USD/JPY becomes a great buy into NFP. However if there are fresh concerns, no matter how large or small, the best currency pairs to trade are to the short side or and to the long side. With FOMC on the calendar, the ’s reaction to and should be limited. 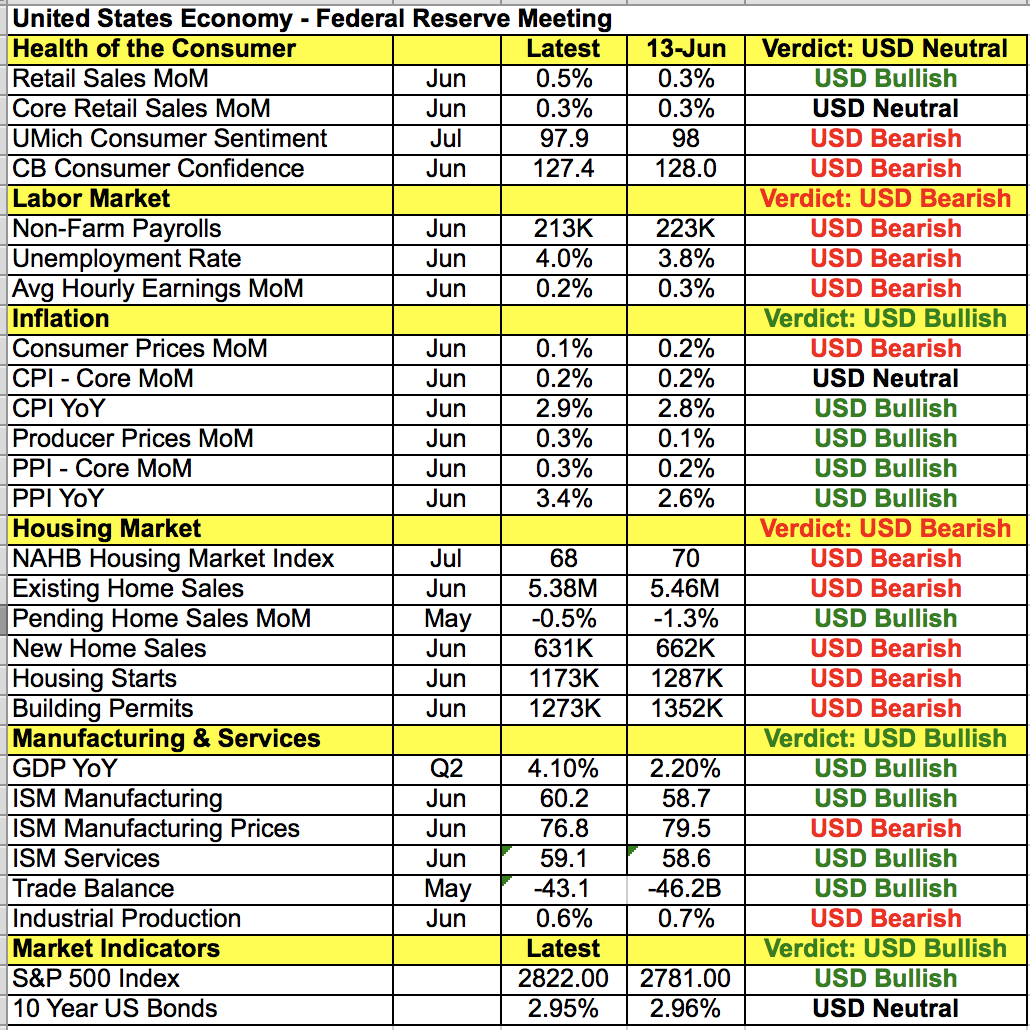 almost hit 112 Tuesday following the Bank of Japan’s monetary policy announcement. The sold off across the board after the BoJ failed to impress. They left interest rates unchanged and while they said long-term yields would be allowed to “move upward and downward depending on economic and price developments,” they intend to keep rates near zero. They also lowered their inflation forecast and pledged to keep extraordinary policies in place for an “extended period of time,” widening the gap between Fed, BoE and ECB policies. Their actions on Tuesday tell us that fighting inflation and boosting growth is more important than boosting commercial bank profitability and that the decision to keep monetary policy extremely accommodative will limit demand for the yen.

Meanwhile, stronger-than-expected Canadian GDP growth drove the higher for the third day in a row. Canada’s economy grew , up from 0.2% in April. On an , GDP growth was expected to slow to 2.3% from 2.5% but instead, it accelerated to 2.6%. Despite the breakdown in NAFTA talks, nineteen out of the twenty sectors surveyed reported stronger growth, so barring further deterioration in U.S.-Canadian trade relations, investors could start positioning for a fourth quarter . So while USD/CAD is holding above 1.30, we believe it’s only a matter of time before this level breaks in a more meaningful way.

The also performed well on the back of stronger and talk about the U.S. and China restarting trade talks. However the index was scheduled for release Tuesday evening and recent weakness could lead to softer activity. The failed to participate in the comm-dollar rally because weakened, which raised concerns ahead of Tuesday night’s . The risk was to the downside because according to Manpower survey and New Zealand’s report, labor-market activity deteriorated between April and June.

Both and gave up earlier gains to end the day unchanged against the greenback. Sterling has seen very little movement ahead of the Bank of England’s and , which the longer that lasts, the greater the chance of a big breakout. We could finally see some movement on the back of Wednesday’s data. The Eurozone, on the other hand, released a lot of information Tuesday. We learned that slowed in the second quarter, but accelerated. Labor-market conditions in were unchanged but increased. As we are looking for further gains in the , both EUR/USD and GBP/USD could remain under pressure.