If Democrats Win, The Dollar Will Fall

One of the biggest political events this year is the U.S. Midterm Elections. Historically, these elections do not have a significant or lasting impact on the dollar or the financial markets but this year, given the controversy surrounding this administration, we could see a meaningful reaction. For what its worth, the traded lower against most of the major currencies ahead of the big event but it held onto its gains versus the and , which tells us that investors are not worried about a major disruption to stocks. Part of this has to do with the overall strength of the economy and their view that the Fed will stick to their plans regardless of tomorrow’s outcome. Service sector activity remains strong with the non-manufacturing ISM index falling only slightly from last month’s 21-year high. There are no major US economic reports due for release tomorrow, which allows investors to focus exclusively on the elections.

According to the latest opinion polls, the Democrats could take control of the House with the Republicans maintaining its majority in the Senate. However there are many close races so the House could swing either way. Here’s how things could play out for FX – we know that dollar bulls like the Republican controlled Congress because it supports Trump’s policies. So if the Republicans maintain control of both parts of the government, the dollar will soar. could hit 114 and could break 1.1350. If Congress is split, with the Democrats controlling the House and Republicans the Senate, the prospect of legislative gridlock that would make it difficult for policies such as the President’s middle class tax cut to pass is negative for the U.S. dollar. But in this case, the reaction should be short-lived. The most bearish scenario for the dollar would be if the Democrats win both the House and Senate, in which case, we should see a very aggressive slide in the USD that takes EUR/USD to 1.15 and USD/JPY to 112. To summarize –

The best-performing currency today was sterling, which found its way back above 1.30. Although service sector activity slowed causing the PMI composite index to move lower, the market is clearly betting on a Brexit deal. No agreement has been reached and a number of EU officials have said that no major breakthroughs are expected this week. Our colleague Boris Schlossberg is right in sensing that “the market is clearly betting that a deal gets done. With 95% of the details ironed out and with a customs union and financial sector fungibility agreed upon it all comes down to the Irish border, which is frankly only an issue for hard-line Brexiteers. We have the feeling that PM May is going to tell her cabinet to “take it or leave it” and frankly with economy tanking and the prospect of tipping into a severe recession haunting policymakers, UK can’t really leave it.”

There’s also a Reserve Bank of Australia monetary policy announcement this evening. The Australian dollar is trading firmly ahead of the decision and there’s scope for further gains if the central bank focuses on the improvements. Throughout this year, the RBA has maintained a neutral policy stance and they have no reason to change this outlook. They believe that interest rates need to remain low to support the economy and that continues to be the case. For the time being, the Australian economy continues to fend off Chinese weakness. Although not many jobs were created in September, the unemployment rate dropped to a 6 year low. Inflationary pressures eased slightly in Q3, but retail sales, business and consumer confidence improved. Nonetheless, the RBA recently recognized the negative impact of weakness and slower Chinese growth and with activity easing across the economy (all 3 PMIs fell), they may want to make it clear that a rate hike is not on the radar. Considering that the Australian dollar is bid, AUD traders could have a bigger reaction to positive comments than negative ones. 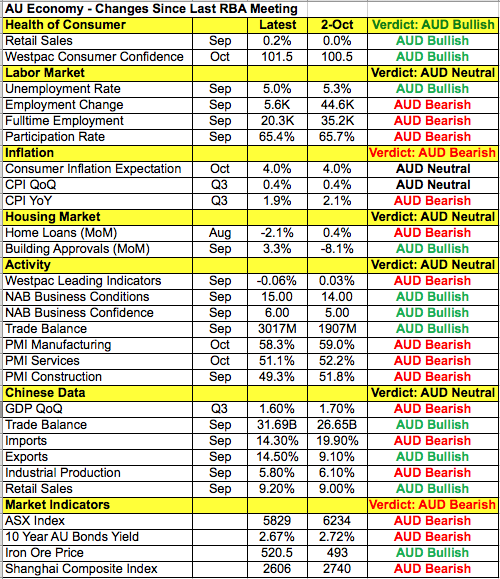